On Making A Mind Map Of The Rough Art Of Murder

A light is shone on the lurid details of Neeraj Grover’s murder—an Indian foray into Capote-Ellroy territory. 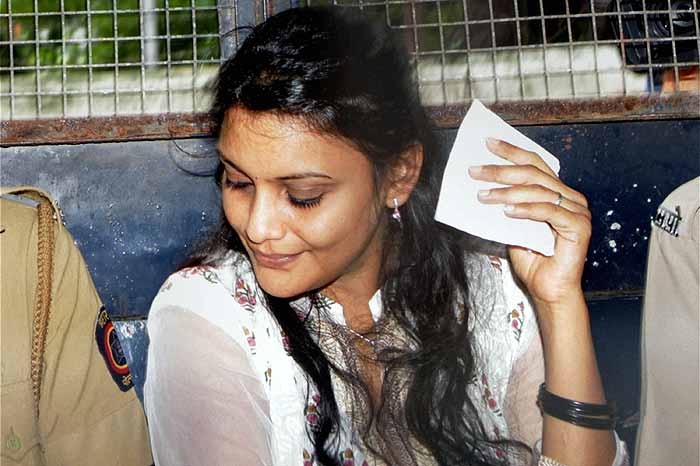 Crime in actual fact can be stranger, and more vicariously satisfying, than in any fiction. Murders in real life enthral us in ways no thriller can: they leapfrog the limits of imagination to feed our darkest fantasy because they plumb the deepest, hidden secrets of human desire. They goad us to fill in the blanks as no film or book can.

When 25-year-old TV exec Neeraj Grover went missing in Mumbai in the summer of 2008, his body later found hacked to bits in bags in a distant jungle, the finger of suspicion pointed to Maria Susairaj, a little-known Kannada actress. Neeraj had spent the night in her suburban flat. To add to the sexual frisson of an occasional one-night stand was a third party: Maria’s fiance Emile Jerome, a handsome, upstanding naval lieutenant who had flown in from his naval base in Kochi, to find them in bed in the early hours. The story had the nation hooked.

It was a classic crime of passion but with some cold 21st century dressing. What made the Neeraj-Maria-Emile deadly love triangle stick in the gullet was its planned brutality and sexual intensity: it was an attack that made the notorious Nanavati murder of 1959 in Bombay, in which a naval officer shot his English wife’s wealthy lover in his bathtub, look like a pinprick of blood in a soup bowl.

Within a few hours of the killing, Maria bought a carving knife and duffel bag to dismember and help pack Neeraj’s body; she got fresh curtains and a painter to spruce up the apartment, and borrowed a car to dispose of his remains. While his freshly-stabbed body lay in the bathroom, Maria and Emile, overcome by bloodlust, made love twice. (Later on, she accused Emile of double rape, but how did that allow her to coolly take a bath between their couplings? That, like other bizarre questions and choices, makes this crime so fascinating.)

Neeraj’s murder was made for TV and by middle-class India’s unfolding TV drama. Tabloid TV went to town claiming Neeraj’s body had been chopped up into 30 or 300 pieces—“Kitne tukde the?” Gabbar-style in Sholay. But as Meenal Baghel points out, on the basis of medical evidence, that a human body swiftly cut can only be hacked at the joints, and the bloodletting is so enormous it is difficult to obscure. This was the problem that forced a minor politico in Delhi, who killed his girlfriend some years ago, to shove her bagged remains into a restaurant’s tandoor.

In lesser hands, Neeraj Grover’s grisly end would be dead meat on the crime beat. Meenal, a seasoned journalist and editor, chooses to be more ambitious; she is interested in exploring her characters’ motivations and milieus rather than the crime itself and its unmasking by Mumbai’s crime branch—it was after two weeks of gruelling interrogation that Maria finally crumbled. She speaks to a large number of their family and friends, travelling to Kanpur and Mysore, to unravel the drive that propelled three small-town young people to find other lives, and the secret nature of their obsessive personalities.

In Neeraj and Maria’s case, it was the lure of fame in Mumbai that drew them to the rootless towers and cafe bars of swampy Oshiwara, where the commercial TV and music industry is based. In a series of deftly executed profiles, Meenal draws sharp portraits of TV tycoons and filmmakers like Ekta Kapoor and Ram Gopal Verma who anchor this mirage-like world for thousands of struggling or failed dancers, actors, musicians, script and song writers. (There is a brilliant scene of Diwali gambling at Ekta Kapoor’s house where she appears, dressed to the nines late at night, to dispense wads of notes to those who can’t afford the high stakes.)

Baghel is well-versed with literature on crime investigation by journalists. She quotes Janet Malcolm’s seminal book, The Journalist and the Murderer, premised on the idea that a journalist “is a kind of confidence man, preying on people’s vanity, ignorance or loneliness, gaining their trust and betraying them without remorse”. Malcolm’s controversial account first appeared in The New Yorker, the magazine that also serialised Truman Capote’s In Cold Blood. But its writing and aftermath broke Capote, and he never rose to recapture the critical acclaim that his book won.

Though inspired by Capote, Baghel’s narrative is hampered by lack of unfettered access to Maria, and virtually none to Emile Jerome. The emerging themes remain episodic rather than tightly-knit. Still, this is a remarkable first in Indian journalism in its reconstruction of a murder most foul.