On Home Turf, A Party That Can’t ­Afford To Lose

With an eye on 2019 and Modi again as ­mascot, the BJP’s readying to do all it takes to keep Gujarat 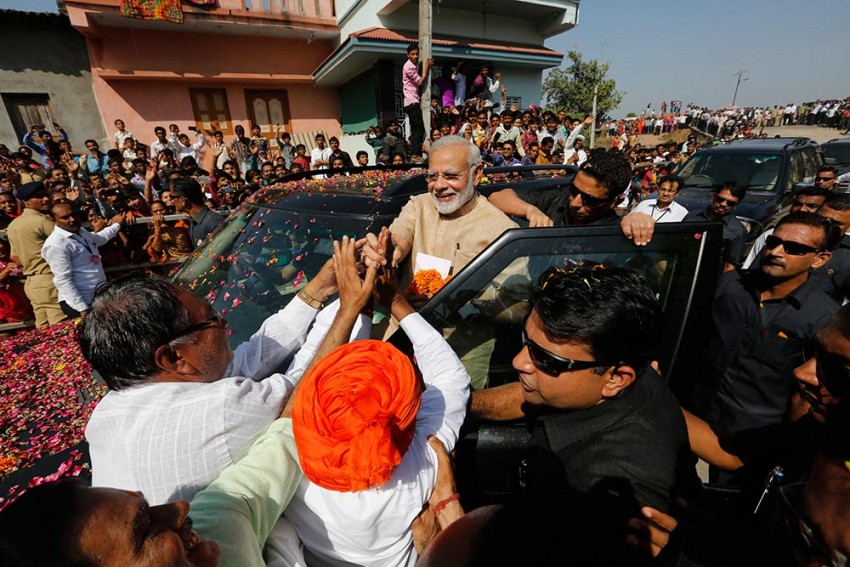 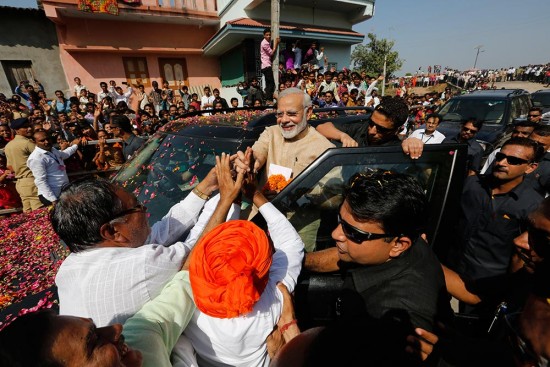 Chanakya’s realpolitik is often quoted by the new, aggressive BJP as a guiding force in administration and an effective ideology to deal with enemies. The party has been demonstrating long enough that it is not particularly squeamish about means in its march towards its goals. As it seems more and more that a win in Gujarat may not be a cakewalk, the party is again looking at Chanakya for inspiration. “Saam, daam, dand, bhed (advise, bribe, punish and divide)—we will use all means to win the assembly elections,” Haribhai Chaudhary, MoS (coal and mines) at the Centre, recently told a Gujarati news channel. That the Banaskantha MP had to emphasise the point suggests the party’s fortunes may be down, and it needs some ingenious ideas to get back on track.

When PM Narendra Modi was asked about the party’s prospects in the Gujarat polls at the Diwali get-together at the BJP headquarters recently, his two-word reply was “param sukh”.  Though the phrase translates as ‘absolute bliss’ in English, the PM probably meant things are under control. To ensure ‘param sukh’ in Gujarat, Modi has emerged as the BJP’s mascot, with the party falling back on his charisma in the absence of a strong local leader. The poll campaign will be centred around his bold decisions in nat­ional interest, even at the cost of incurring the wrath of several sections of voters. Even as efforts to placate the disgruntled traders continue, the party is going all out with its claim that GST and demonetisation have been good for the country. India jumping up 30 ranks on the list of countries in terms of “ease of doing business” has come just at the right time, and the party is busy linking it up to the government’s bold decisions.

While Modi remains the face of the “I am Vikas, I am Gujarat” campaign, the BJP is not taking any chances and has deployed its trusted big guns in the state. General Secretary in-charge of Gujarat Bhupendra Yadav, joint general secretary (organisation) in-charge of West Zone V. Satish and foreign cell chief Vijay Chauthaiwale are all camping in the state. Chauthaiwale, one of those who handled social media for the BJP during the 2014 Lok Sabha poll ­campaign, has been tasked with the same job in Gujarat. Cabinet ministers, including Arun Jaitley, Nirmala Sit­haraman, Rajnath Singh, Ravi Shankar Prasad and Smriti Irani have already visited the state. Yogi Adityanath, bel­ieved to be quite popular in the state, is also likely to address some rallies in the run-up to the polls.

Modi visited his home state thrice in October. Though his schedule is still being finalised, sources claim he may address at least a dozen rallies. BJP president Amit Shah has been keeping a hawk’s eye on the goings-on and is expected to spend a lot more time in the state in the coming days, possibly even camp there after the Himachal Pradesh polls.

The BJP’s 15-day ­Gujarat Gaurav Yatra, which ended on October 16 at ­Gandhinagar, was marred by protests along its 4,471-km route.

“The Gujarat polls are a prestige issue for the PM and the party president,” says a senior leader. “Any electoral setback will reflect directly on them. If we win less than 115 seats, it would be a loss of face for us and may affect the 2019 Lok Sabha polls too.” In 2012, the BJP had won 115 seats in the 182-member Gujarat assembly. Shah has set his party a target of over 150 seats this time. Party insiders in both Gujarat and Delhi, however, say it seems somewhat difficult to achieve. Besides a 22-year-long incumbency, there is also a palpable sense of growing disenchantment among voters. “Until a few years ago, it was difficult to imagine that a BJP corporator could be beaten up. But last month, Vadodara corporator Hasmukh Patel was tied to a tree and beaten up by the people for failing to prevent a slum from being razed,” says a party leader from Gujarat.

Among other signs of change are a huge rally by disgruntled textile workers in Surat over GST implementation, Ahmed Patel winning a Rajya Sabha seat and positive responses to Rahul Gandhi’s self-deprecatory remarks at Congress rallies. Even the BJP’s 15-day Gujarat Gaurav Yatra, which culminated on October 16 at Gandhinagar, was marred by protests along its 4,471-km route. This shows more people have started to question the ruling party in Gujarat.

GST seems to be the most troubling issue, not “Hardik Patel or the Congress,” admits a central leader. “Whether we get 110 seats or 150 depends mainly on whether the party has been able to allay the concerns of traders on GST.” Traders traditionally comprise a significant support base of the BJP.

In his speech at the Gujarat Gaurav Mahasammelan marking the end of the Yatra, Modi tried to allay traders’ GST fears. Switching from Hindi to Gujarati, he said the Centre is working towards streamlining the GST processes to ameliorate their problems. Earlier, the gov-e­rnment had slashed GST rates on certain items, including unbranded ‘khakra’, a Gujarati snack.

“Traders, especially in the textile market that almost entirely runs on cash, have never paid taxes in their lives,” says a central leader. “Like everyone else, they too must come under the tax net. If Modi doesn’t do it, with the mandate he has, who will?”

Besides GST, the other worry for the BJP is the Patidar factor. Insiders believe the party has been ignoring it at its own peril. Patidars or Patels, comprising 12 per cent of the state’s population, are an economically and politically influential group. They have been seething since 2015 when the police cracked down on their agitation demanding reservations in government jobs and educational INS­titutions. The BJP had been banking on former CM Anandiben Patel for “softening” the Patidars, but with her deciding not to contest this time, citing the party’s unwritten rule that bars those above 75 years from contesting elections or holding any important public office, it seems difficult to reach out to them.

“Anandiben’s decision will push the Patidars further away from the BJP,” Unjha MLA Narayanbhai Patel, a Patidar leader from the BJP, tells Outlook. “She should change her mind. Only if she contests would the Patidars support the party, else they would be dejected and get further alienated.” Many others in the BJP, though, are wary of Anandiben, trying to figure out her game plan. “She has been angry for some time and waiting for an opportune time to strike back,” says a party leader.

Young Patidar leader Hardik Patel is working closely with Congress, which is also trying to form an alliance of youth leaders such as OBC leader Alpesh Thakor and Dalit leader Jignesh Mevani. Hardik says the polls are not about the BJP or the Congress. “Around six crore people of Gujarat are against the BJP. And I am sure the people will deliver unimaginable results,” he tells Outlook, adding that the people’s mood can be gauged from the Gujarat Gaurav Mahasammelan, which seven lakh people were expected to attend, but “not even one lakh turned up”.

“The people of the state have realised that the BJP governments, both in the state and at the Centre, have only made announcements without any implementation. They have done nothing for the jobless or for the farmers. And they did not respond to the demand for Patel reservations,” he alleges.

A senior cabinet minister, however, finds Hardik’s enthusiasm misplaced. “The party machinery is working overtime in Gujarat,” says the minister, who didn’t want to be named. “Our workers are fully motivated and working day and night at the grassroots. If the PM and the party president are spending so much time in the state, you can imagine the work being done by the others. It is a challenge, but then our president (Shah) thrives on challenges and knows how to overcome them.”