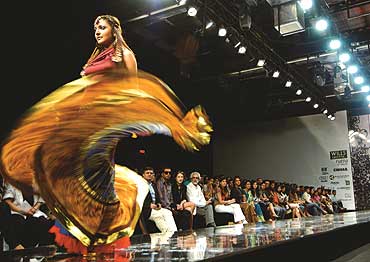 Wills Lifestyle Fashion Week, Autumn/Winter '08 is like a five-day-long party with the most diverse guest-list imaginable. Wafting about the luxurious venue that the Fashion Design Council of India (FDCI) has conjured up in Pragati Maidan are socialites preening in frothy souffle frocks and vertiginous heels as they compliment one another's success at dieting, stylist dandies in immaculately miscoordinated get-ups, tall models stalking past in sunglasses and big handbags and the sudden crush of shouting cameramen and TV journalists that signals the cornering of an occasional Bollywood star. All of it is nearly enough to make you forget the real stars: the clothes.

And there are a whole lot of those to marvel at in the fashion week's eleventh season. While at its inception in '02, there were 52 designers showcasing their work, this edition has an impressive tally of 82, including 10 accessory designers and 15 young rising fashion designers. With Manish Arora and Rajesh Pratap Singh's latest dazzling outings at the prestigious Paris Fashion Week last month, as well as Anamika Khanna's earlier in spring, a lot of foreign interest has been drubbed up in the Indian fashion scene. That's translated into an impressive list of buyers, agents and even fashion tastemakers from Europe and America.

As executive director, FDCI, Sumeet Nair, puts it, "I can unequivocally say that qualitatively, we have the best set of trade representatives this year: buyers, agents, the influentsia, the opinionmakers. Also, we'd never had foreign PR and sales agents before and they're especially powerful." They're a great facilitator for Indian newcomers to the international fashion arena; plugged in as they are into buyer tastes and the reigning fashion trends of New York, Milan, London and Paris. Adds Nair, "They have a multiplier effect. One sales agent translates into 50 or 60 new buyers!"

With such a discerning, well-heeled crowd at the fashion week, it's easy to see why the FDCI has gone to such lengths to ensure they're well-entertained between shows. They can recharge with shiatsu massages and salon visits, feed on smoked salmon or amuse themselves at the Chivas VIP lounge, which pumps out raucous club music and tipsy socialites throughout the day.

While most spectators were merely bemused, one funkily attired buyer with gay ribbons woven through her hair stared with mounting mortification as each model swooped past. The richly textured tunics and capes of Payal Jain's Black Earth collection, heavy on greys and browns, shown on day two, were a rather more fetching elegy to environmental destruction.

Suneet Varma, on the other hand, turned his gaze to the East, citing "Kabuki paintings and the haunting Memoirs of a Geisha" as the inspirations behind his form-fitting, metallic toned jackets, coats and breeches which were embellished with oriental applique motifs. Kavita Bhartia glammed up the gypsy look with scarves and gold cuffs setting off sweeping, luxurious silk skirts.

Hooting and pouncing photographers livened up the Gauri & Nainika and Namrata Joshipura show, which had actress Amisha Patel simpering in the front row. Namrata's collection had high-collared, short-sleeved dresses in muted colours shimmering in metallic sequins. And Gauri & Nainika did what they do best: yet another collection of dreamily draped, romantic dresses in jewel tones, to keep up with global fashion trends. The showstopper was Bipasha Basu, striding out beaming into the blitz of flashes, clad in a lavish peach-and-black lace gown.

A rarer flock of celebrities showed up for the Rohit Bal show, which had the hall bursting at the seams: sarod playing brothers Amaan and Ayan Ali, crossdressing hairdresser Sylvie and management guru Arindam Chaudhuri with his trademark ponytail and Swarovski crystal spectacles. The show was spectacular and lavish. As Bal himself proclaims, "The collection is dramatic and for the most part unwearable." The highlights were clingy armour-like corsets, glimmering shifts, dramatically flounced and rippled skirts in metal-toned gota fabric.

While experienced designers have each struck upon a successful formula they keep rejigging, it's the new crop that's eager to move away from kurtis and saris, to experiment with fabrics and push new non-Indian silhouettes.

"As designers, we've changed, we've moved towards non-Indian references," says 23-year-old Prashant Verma, trained at Alexander McQueen, Galliano and Dior, whose collection is inspired by the youthful destructive rage of James Dean. Thumbing through his collection of delicate hand-dyed bandages draped into classic Hollywood gowns, he remarks, "We're catering to global citizens for whom fashion is not defined by cultural identity."

FDCI czarina Rathi Vinay Jha says fabric, not innovation, is the Indian USP, "We're known for our quality, hand-worked weaves, printing, and embroidery. The craft skills that embellish and add value." It's up to the younger crop to make a garment's worth be measured by the quality of its design, rather than its weight in sequins and ornamentation. 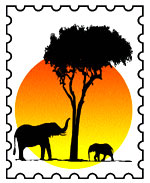