Ole McDonald Had A Cow 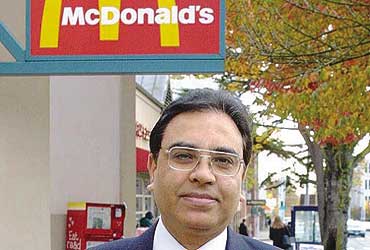 outlookindia.com
-0001-11-30T00:00:00+0553
Harish Bharti bethinks himself a modern-day Robin Hood, taking money from big corporations and distributing it among their powerless, gullible "victims". But in his latest avatar, the lawyer is more akin to David, knocking down the mighty Goliath of the global food market, McDonald's, and gladly watching them eat humble pie.

Perhaps McDonald's hadn't before come across a lawyer as diligent and committed as Bharti. "Taking on McDonald's seemed a crazy idea," he reminisces. But Bharti courageously filed a class action lawsuit in the name of Hindus and 15 million vegetarians in a California court and another in Washington state against McDonald's, in May 2001. His charge: McDonald's had deliberately misled its vegetarian patrons in using beef tallow in its French fries and hash browns long after making a widely-publicised pledge to cook them in vegetable oil.

The lawsuit ultimately led McDonald's to admit it used beef extract, not tallow. The ruling in the twin legal action early March declared it compulsory for McDonald's to disclose the ingredients comprising its products, establish a vegetarian advisory panel to oversee relevant dietary restrictions and guidelines and pay a huge $10 million in compensation to vegetarian and Hindu organisations across the US.

"We are working on a list of organisations that promote Hinduism," Bharti says, adding, "Drawing up that list is the easy part. The tough part was bringing McDonald's to its knees. It is known to be the most arrogant corporation in the world and one that doesn't take criticism kindly."

His personal experience goaded Bharti into filing the suit. A vegetarian himself, Bharti says he felt humiliated when he took Dr Weetraganand, a physician-turned-swami friend from India, to a McDonald's restaurant in Seattle for some French fries. "I thought that was the only vegetarian item he could eat," Bharti explains, adding with anguish, "I was a host to the swami and I became responsible for feeding him something he would rather die than eat."

Taking on the might of the multimillion-dollar fast-food chain, supported as it is by a battery of highly-paid lawyers, was indeed daunting: "There is always concern at the back of your mind but this did not deter me." Many in the legal community discouraged him, believing it both foolhardy and perilous to confront McDonald's. But his wife Anoop provided him the crucial moral support. "If I didn't have her support, I wouldn't have been able to take these guys on. She's like an angel," he gushes.

Many say the $10-million compensation's nothing but Bharti's happy: "Ten years on, no one will remember the money. But this apology and disclosure will change the way the food industry treats its customers. McDonald's is the leader in the industry and everyone else will have to follow."

Bharti helped frame the apology, soon to be published in papers across the US. Its text reads: "McDonald's sincerely apologises to Hindus, vegetarians and others for failing to provide the kind of information they needed to make informed dietary decisions at our US restaurants." Acknowledging that in its switch to vegetable oil in the early '90s "mistakes were made" in communicating to the public details of ingredients in its fries and hash browns, the apology will admit these included instances where the potato products sold at US restaurants were improperly labelled as "vegetarian". Preens Bharti, "In the last 100 years, this is the

first big food corporation to apologise, admit wrongdoing and pay millions in compensation. I'm proud of that. I wouldn't trade more money for an apology." (Incidentally, McDonald's also assured customers that all chips sold at its Indian outlets "do not contain any beef or animal extracts of whatsoever kind".)

Among those prompt in lauding his efforts was Union minister Maneka Gandhi, herself a fighter of many a vegan cause. She sent an e-mail congratulating Bharti for providing "a body blow to that Satanic empire!" These days, the lawyer is revelling in his success. "What gives me the most satisfaction is that when you win a case like this, you make changes in society which are substantial."

And to think the do-gooder could have been lost to the legal community had he not listened, believe it or not, to his astrologers. Bharti confesses, "I wanted to be a swami but was told by astrologers and swamis alike that I should work out my karmic debt by living within society and after doing this, think about becoming a swami." Before making a decisive choice about his career, Bharti studied the Vedas for seven years in Punjab with Swami R. Vaidyanathan, a nuclear scientist-turned-swami. So, why the legal profession? A big factor was that he shared his birthday with Mahatma Gandhi. "I too was born on October 2 and, like Gandhiji, I too am a lawyer."

Bharti moved to Seattle from Punjab, where he was successfully practising law, in January 1983. Here he soon made a name for himself as a "legal eagle". Claiming his profession is the most effective way to battle injustices in society, he says belligerently, "I like going after mighty corporations."

Bharti is now prosecuting a class-action lawsuit against Boeing on behalf of several thousand Asian-American engineers. And he's fighting the case gratis, hoping to win and get Boeing to foot his bill. If he does not win? "I don't get paid," he says.