Aged mammoth SBI's waking up to the future, ready to give the Johnny-cum-latelies a run for their money 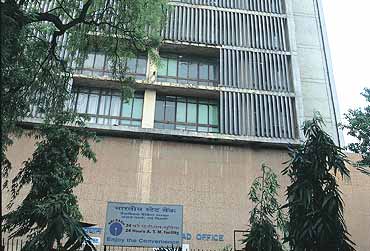 outlookindia.com
-0001-11-30T00:00:00+0553
The Bank has size. There are a total of 298 commercial banks in the country, with 66,410 offices. The Bank owns 20 per cent of these. It has 13,592 branches, along with its seven associates. The Bank has reach. It's three-and-a-half times the size of the next biggest bank, and bigger still than the next five banks put together. The Bank has dominance. It has a 26 per cent share of the total banking business in India.

Imagine when this giant's network is completely connected. A customer could then walk into a branch in, say, Kanyakumari and access his Delhi account, withdraw cash, transfer money, invest in funds, buy insurance or government securities or any other savings product. In fact, plans are already afoot to convert some branches into financial 'supershoppes'. And the Bank's investing more than Rs 600 crore in technology over the next two-three years to interconnect more than 3,000 branches. For the Bank, size and technology could prove to be a lethal combination.

The Bank's chairman, A.K. Purwar, knows the importance of offering more solutions to customers and simultaneously ramping up technology. In an interview to group magazine Outlook Money, Purwar says: "We want to be the number one in everything that we do." He has already changed the focus of the Bank from corporate to retail, and is looking to advance around 50 per cent of its assets to individual consumers from the 15 per cent currently. All of this is remarkable considering that sometime ago, it looked like the Bank would end up like an also-ran on the banking scene. After all, the lethargic, seemingly-bureaucratic monolith was competing with those who were known to take quick decisions.

The pilot phase of the core banking solutions will be rolled in August, and by March 2004, the Bank expects more than 100 branches to run on this platform. By March 2005, the Bank is working towards integrating and networking more than 3,500 branches across India. By contrast, newer private sector banks like ICICI and HDFC have only around 400-500 branches that are fully networked.

The Bank is also supplementing its brick-and-mortar presence through a network of ATMs, which will enable 24-hour banking for customers. It has already installed 1,600 ATMs across 460 cities which are in the process of being fully networked. It also plans to add another 1,500 ATMs by March 2004, which will make it the only bank with more than 3,000 ATMs, nearly twice more than the nearest competitors.

Not content with networking alone, Purwar's also looking at harnessing the reach of the Bank to cross-sell various products and services. Says Purwar: "We want to cross-sell various insurance products through all the branches across the length and breadth of the country." For example, it plans to sell life insurance and mutual fund products across the counter in the next three-four years. In fact, the Bank has already begun selling the insurance products of its subsidiary, SBI Life, in 400 branches.

If that sounds a little optimistic, look at what the Bank has already achieved. It entered the credit card scene only five years ago, when it appeared that the business had reached its saturation point. But as of today, it has issued 12 lakh cards—the third highest in the country.In the next two to three years, the Bank wants to become the number one credit-card issuer in the country, surpassing the 18 lakh cards issued by Citibank. And its card subsidiary, SBI Cards and Payments, has achieved its first ever net profit of Rs 16.57 crore this fiscal year.

Five years ago, when the Bank forayed into home loans, it seemed like it was too late an entrant. It had to contend with new competition from its psu peers as well as foreign banks, which entered housing loans at about the same time. And at best it seemed that the Bank's home loan business could be an also-ran, in particular since its 26 per cent subsidiary, SBI Home Finance, came a cropper. Today, the Bank is the number two player (well, ICICI too claims this position) in housing loans with outstanding loans to the tune of Rs 12,153 crore after HDFC Bank's Rs 15,459 crore.

The Bank wants to do to cars, small businesses, agriculture, and individual financing what it has done to housing finance and credit cards. It wants to increase its retail advances to international standards of 50 per cent of assets from the current 15 per cent of assets. The Bank has targeted new customers; for instance, it has introduced customer specific retail advance products like Teacher Plus, Police Plus, Lawyer Plus and Doctor Plus to help professionals get finance to expand businesses or buy equipments. For the agricultural sector, it introduced Dairy Plus to finance milk producers (for buying milch animals and milking machines) and small farmers (for buying cows and buffaloes).

For car financing, it recently tied up with the country's biggest car company, Maruti Udyog, to finance the latter's cars. Moreover, to make housing and car finance products more attractive, the Bank has offered group life insurance at a concessional rate to cover loans outstanding in the case of death, free SBI credit cards and also a free personal accident insurance cover.

The Bank will require additional skilled manpower to sell the various products on offer. Currently, it has over two lakh employees. Some of them could enter the retail initiative as and when the technological upgradations help release the workforce. The Bank has already chalked out plans to impart training to its staff through the SBI Training Centre. Says Purwar: "We are encouraging our staff to undergo training. Our centre is fully equipped to provide training in an organised manner."

Many of the new initiatives of the Bank will require tremendous investments in infrastructure, in putting systems in place and training. But here's where the Bank could dip into its reserves to generate enough resources to invest in the future. Over the last two years, the Bank has doubled its net profits to Rs 3,105 crore, and it's estimated that there are huge unrealised gains in its investment portfolio, thanks to the falling interest rates. Its quality of assets, so vital to the banking business, has been improving with non-performing assets shrinking from 6.41 per cent to 4.5 per cent in the last two years. The lower provisioning required and improving profitability should leave the Bank with enough on its books to finance future growth.

For the moment, it is distancing itself from its old ways and charting new territories. A few years from now people will be asking whether the Bank's aggressive retail initiative is increasing the indebtedness of the average Indian or helping him in wealth creation, whether it will add to the NPAs or increase the profitability. And whether it can remain efficient despite the high-growth blueprint. But for now, it can be safely said, the Bank is moving forward. And taking on competition head-on.