The Indians' capacity to adjust and overcome is driving its society 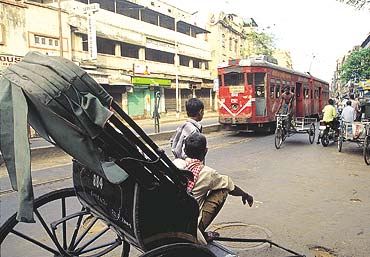 outlookindia.com
-0001-11-30T00:00:00+05:53
Although it has been over 50 years, I shall never forget my first impressions about India. I was 22 when I landed in Calcutta one day in 1953. We were on our honeymoon, but it was really the beginning of my love affair with India. On that first trip, we discovered the country in a magnificent way, travelling in the "OK Tata" trucks—travelling this way on the roads of India is really the best way to discover this country. What struck me at first was its immensity. In Europe, we are used to small countries. But India is a continent in itself. With every 150 kilometres you travel you can change languages, religions, food. Suddenly you discover a mosaic of people, of trees, of colours. To me, that's the most extraordinary thing about India—to see such a mosaic in one country.

At that time, people in Europe, or even in America, knew little about India, and cared even less. Even some 20-odd years later, for example, when I approached my publishers with a book on how India became independent, they laughed at me. Their response to the book I wanted to write with Larry Collins on the fabulous character of Mahatma Gandhi, who could unite so many different countries that were India and lead it to independence, was discouraging, to say the least. They said: why do you want to write a book about India? The writer of bestsellers like O Jerusalem and Is Paris Burning? should write a book about China, not about India.

But I didn't care. I decided to write the book even if we did not sell one copy. As it turned out, Freedom at Midnight was read by 50 million readers. It opened the history of India, I am proud to say, to the rest of the world. In the summer of 1976 all the bookstores of Europe were full of not only Freedom at Midnight but other books about India like the memoirs of Gandhiji, or albums on India. Fifteen years later, it was the same story: I went to see my publisher to say that I now wanted to write a book on the heroic community of the city of Calcutta, to show the world that people can overcome everything with a smile, with the power to share what little they have. My publishers once again laughed and said nobody is going to read a book about a basti in Calcutta. They were wrong again. The City of Joy sold more than nine million copies. It has become a cult book in the western world and in Japan.

Like Calcutta's slum communities, I have always regarded the dabbawallahs of Mumbai as a symbol of the genius of Indian people. To me, a country that can produce an extraordinary entrepreneurship like Mumbai's dabbawallahs will always be on top of the world. Of course, things are changing very fast, but this Indian genius that can create an organisation like the dabbawallahs is bound to find its way into modern enterprise like computers. It's a capacity not merely to adjust to adversity, but to invent the means to overcome it. I have seen this again and again in my years of research in India.

The world is also discovering this capacity of India to reinvent itself. For instance, a prime time TV show that ran this summer in France was the story of the Tatas. Millions of people watched this fascinating saga as an example of what India can do to change itself and enter the modern world. There are other signs of how perceptions on India are changing, especially in France. Take the TV programmes now showing on the travel channel here. Every night at prime time you have millions of French people watching programmes on different parts of India. Yesterday, there was a beautiful programme on travelling from Calcutta to Benares. Most French people are familiar with musicians like Zakir Hussain. A bestseller in France this summer is Vikas Swarup's Q&A. The French edition has a marvellous title—The Fabulous Adventures of An Unlucky Indian Who Became a Billionaire.

And that, to me, is really how the world sees India now. Take Lakshmi Mittal, for instance. He has been monopolising the front page of every newspaper in France and Europe for the last few months. There may be some hostility from investors, but for the average French person, there is only admiration when they see his face in the papers or read about his daughter's marriage in France. They are amazed that India can produce an industrialist like Mittal. 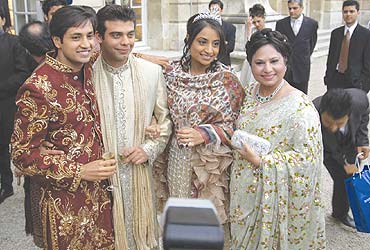 Indian wedding: The wedding of L.N. Mittal’s daughter made front page news in most newspapers in Europe

As a result of this new interest in India, people are now visiting not only the tourist spots like Jaipur and Jaisalmer, but are going to Bangalore, Gurgaon, Hyderabad, even Calcutta—and not just to see the homes of Mother Teresa but the new industries that are coming up.

But there are two Indias today. The India of the Maruti and Sumo wallahs, of all those energetic businessmen who travel the world, the India which is shining. And my concern is that the India that is not shining, the India of children who never go to school, where people never go to sleep with a full belly—that India must not increase. I am always telling my Indian friends: don't let the gap increase between you and the other India that is not winning. That is very important because we don't want this huge mass of people not to get a share of the country's increasing prosperity. Why should people have to stand in a queue for four hours a day for a jugful of drinking water when, at the same time, millions of dollars are being invested in new technologies and hundreds of industries are coming up?

The way forward, I firmly believe, is through education. Take the literacy programme I have taken up in which women in 2,000 villages are taught to read and write. The impact has been quite dramatic: in these families where the women are now literate, the number of children in each family has fallen from four to one. And this in only five years. Education can change so much. I have started schemes of microcredit for the really underprivileged in Bengal—not assisting them but really just restoring their pride. It's like a pump: you give them a small amount of money, they do some business, start earning and repay.

But nothing can be fully achieved unless corruption is rooted out from all sectors of society. Like everywhere else in the world, progress needs a reliable, trustworthy system in order to fully develop.

I am anxious that all my Indian brothers and sisters can benefit from the country's prosperity. I know this is difficult to achieve. On my part, I am doing my little bit. For the last 25 years, half of my royalties and all the donations from my readers have gone towards humanitarian actions in Calcutta and other parts of Bengal. I am proud to say that among other development programmes, I have contributed to cure 10 lakh TB patients, to rescue from the slums of Calcutta some 10,000 children suffering from leprosy, to dig 540 borewells for drinking water in very poor villages; and started a fleet of four hospital boats in the Ganges delta that brings medical supplies to 10 lakh villagers living in 54 islands. This is my repayment for the love and everything else that I have received from India.

(As told to Sheela Reddy.)

'I Bet Many Times India Would Take Off. It Has'