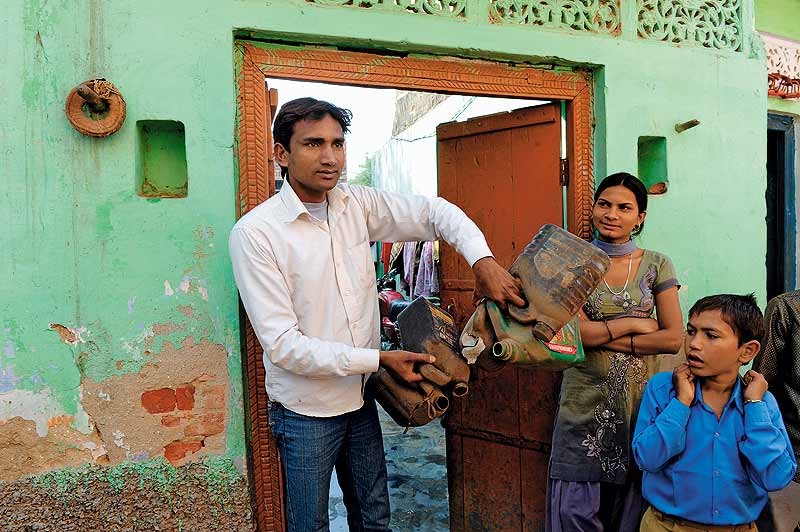 Dharamvir Chaudhary’s fair price shop in Kot Kasim, Rajasthan, is deserted. A year ago the tehsil played host to an experiment by the government: residents were asked to buy kerosene—a fuel most of India’s poor use to cook and light lamps—at market price (Rs 50 a litre) from shops like Dharamvir’s. People were promised that the subsidy (Rs 35 a litre) would arrive in their bank accounts, provided they bought kerosene at market prices. The fair price shop was supposed to get the usual commission, 15 paise per litre.

Some 15,500 people rushed to open bank accounts. In January 2012, thousands purchased kerosene at market price, three times the subsidised rate, and waited for the balance. For many, it never came. Daily-wage labourer Bachan Singh says he spent Rs 1,000 on kerosene between January and April but his account at Rajasthan Grameen Bank didn’t ever get the subsidy amount. He started buying wood fuel instead. “We suffer from smoke, extra effort and higher prices, but have no choice.” Since the project began, Dharamvir says, kerosene sales have dwindled and he wants to stop stocking it.

Ashutosh Pednekar, district collector of Alwar, says kerosene sales through fair price shops dipped dramatically this year—a sign that families with duplicate ration cards were weeded out. “It also shows dealers can’t siphon off kerosene to generator- or tractor-owners any more,” he says. Maybe, but residents lament that they cannot afford to buy it minus the subsidy. They’d rather buy diesel or wood. And they accuse officials of ignoring their complaints about the missing money. Pednekar admits delays, saying the project slowed while being assessed: “Money is now in the state. It will reach people soon.”

PDS shopkeepers say they would rather not stock kerosene under the new system. “Last month, I was forced to buy a drum of kerosene,” says Dharamvir. He, in turn, persuaded people to buy it at market price—just to get rid of it. In March 2012, 100 of the 350 people registered with him bought kerosene, by November only 39 did.

Patram, from Pur village, bought higher-priced kerosene a few times before giving up on the subsidy. “Our ration card is in my father’s name, but the bank account in mine. No official seems to know what to do about this,” he says. Pednekar says that to sort out the mess, banks are being convinced to extend their coverage so that people don’t have to travel long distances for money. Smart cards are also being talked of.

Quick calculations show a fair price store could siphon off Rs 2,000 worth of kerosene in a month under the old system. Today’s 15 paise a litre commission is no match. “It’s true PDS stores may need more incentive; we’ve already given Rs 5,000 to upgrade infrastructure,” says Pednekar. Critics of the new system say a universal PDS is the best option. But New Delhi is convinced that direct cash transfers work. On paper it’s fool-proof. On ground, it’s uphill from step one.