Hansie Cronje was a captain who inspired players to play for him, not just with him 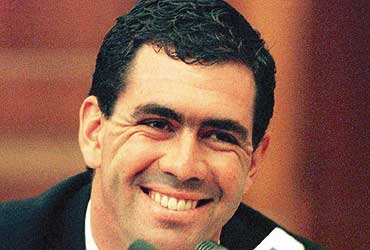 outlookindia.com
-0001-11-30T00:00:00+05:53
It still hasn't sunk in that I am writing an obituary of my friend, and captain, Hansie Cronje. Two days have passed since my phone rang, conveying the shocking news of a plane crash in the Eastern Cape and the chance that the former national cricket captain of South Africa was a passenger. Soon, the story was unfolding and details confirmed that indeed a young life had ended in the most tragic circumstances.

We spoke last week about the problems that had besieged South African cricket in the past few months, and for the first time in many months he sounded like the Hansie I had known for so many years. We spent almost an hour on the phone, and as the conversation turned to the challenges and issues that faced cricket in SA, his voice became animated as he recounted his vast experience and their relevance for today's problems. At no stage did he suggest that he knew everything or imply that he could do things better, but he sounded excited to be involved in some small way in the sport that he loved and which consumed his life.

My first recollections of Wessel Johannes Cronje goes back to the South African domestic night cricket, in a match between my Western province and his Orange Free State (OFS). We were the big province and were expected to deal quite comfortably with the OFS. We batted first and placed a competitive score on the board and were pretty confident that we had the firepower to defend it. One of the openers on the OFS side was a young man who by then was well known in SA as he had captained school teams with distinction and was earmarked to go on to great heights in SA cricket. Although our quick bowlers gave him a real working over, it became clear that this was not only a very good player, but also an extremely determined man. Needless to say, a Cronje half-century defeated us, and a fierce rivalry between the two of us began and continued for many years.

They say in sport that you try your hardest when you are competing against a respected friend, and this was particularly true for Hansie. In every provincial match I was always pushing myself for the perfect delivery while he was making sure that he concentrated a little harder when I had ball in hand. He was a very good player, without being a great player, but any shortcomings in technique were compensated for by a steely determination, almost a stubbornness, that elevated him to a level above his ability. I took great pleasure in one particular dismissal during a match in Bloemfontein that enabled us to win the match, but I reckon that was scant reward because he won many more of the battles than I. The common factor was that he remained the same man in victory and defeat—a true gentleman.

He went on to captain South Africa and I had the honour of serving as deputy. He was without doubt the best captain that I played with or against. He had the unique ability to get the best out of each player who played for him. And that was the key—you played for him, not with him. And not because he made you play for him, but rather that you wanted to play for him. When he needed to be tough on a player, he was and when you needed a softer approach and an understanding of things that were beyond cricket, he could do just as well. He was the perfect captain—as our fledgling rainbow nation started out on its journey—in circumstances that no other international captain had endured. Hansie was the perfect man to take SA to the top and he did it with commitment and desire that empowered all around him.

His career ended almost as tragically as his life as he became involved in the underworld of match betting and the selling of information on international matches. The cricket world was looking for a culprit and they found him in the SA cricket captain.The torment that he had to endure through the next few months must have been too heavy a weight to bear as everyday legal proceedings were placed in public domain. Nobody denied his guilt, least of all him, but to have the trial telecast live must have been soul-destroying for this proud man. All throughout, he remained a gentleman, and I believe that he took the names of many more guilty men to his grave.

I spent a few hours with him one night, discussing the issue and I left convinced that Hansie never fixed a match. You see, you don't win 81 per cent of the ODIs in which you are a captain by throwing every other game.

On Saturday morning, on the slopes of a mountain, South African cricket lost an ex-captain. I lost a friend. A friend who encouraged me to trust in my ability when my confidence wavered, to play for my country as if my life depended on it and who taught me that while pursuing your dreams, you can still just be a good bloke.