Off On A Bicycle

A truck with SP may save the government and the N-deal for now. But will the tie bind the Congress? 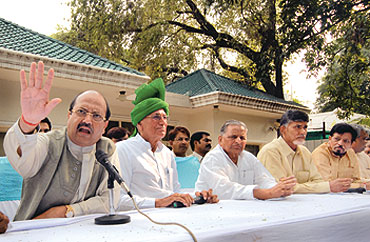 outlookindia.com
-0001-11-30T00:00:00+0553
If politics is the art of making the impossible possible, Prime Minister Manmohan Singh seems to have pulled it off. Faced with an uncompromising Left, he worked, almost single-handedly—if Left, UNPA and Congress sources are to be believed—to find support for his nuclear deal from an unlikely quarter, the 39-member Samajwadi Party. In the process, the good doctor proved that the cerebral can also be political, that behind that tentative demeanour, there is steely resolve. 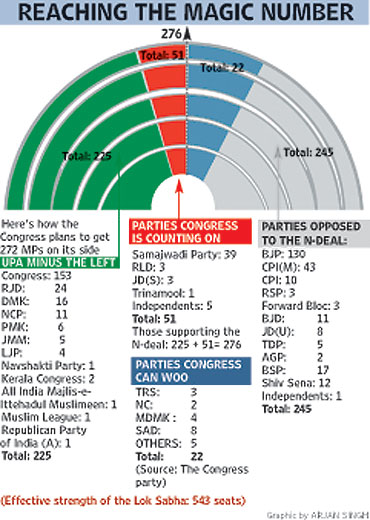 Four years ago, Samajwadi Party MP Amar Singh was the "uninvited" guest at the UPA celebrations at Congress president Sonia Gandhi's residence. But on May 22, at a celebratory dinner to mark the occasion of the UPA's fourth anniversary, he was an honoured guest, for whom a place had been reserved at the PM's high table. When he arrived 40 minutes late, the PM—who had reached the dessert stage of the meal—rose and went across to greet him. The exchange that followed was momentous. "I hold Prime Minister Manmohan Singh in high esteem. I have great respect for him," said Amar Singh. Then, as if to remove any doubt, he added, "And this is not recent, it is from a long time." The PM's response was equally cordial, if unexpected. "The respect is mutual," he said, his voice betraying no sense of irony. "In politics, there are no permanent foes. On national issues...there should be a serious attempt to forge a national consensus among like-minded political parties."

That conversation evidently set the stage for 'the beginning of a beautiful friendship'. A friendship that, unlikely though it may have seemed sometime ago, is now poised to bring the UPA closer to achieving what had seemed impossible till recently: prolonging the life of its government while making it possible to take forward the Indo-US nuclear deal.

With the Left parties giving the government an ultimatum that they would withdraw support if it pressed ahead with the deal, it had seemed as though it was curtains for the 123 Agreement—unless the government wished to face an early election in the times of dangerously high inflation. Congress spokespersons and UPA allies alike spoke in one voice—the deal should go forward but not at the cost of an early election or friendship with the Left parties. Even a pro-deal minister believed to be close to both the Congress president and the PM said as recently as the last week of June: "I am very clear—without Left support, there can be no deal." 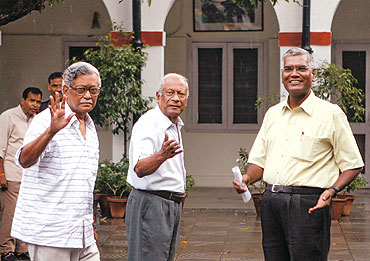 Three men and a no: CPI leaders Gurudas Dasgupta, A.B. Bardhan and D. Raja prior to the meeting with Congress in New Delhi

Talk of pressing the SP into service had been around for some weeks, but most Congress functionaries did not believe it could become a serious option to its relationship with the Left, troubled and problematic though it was. Especially as the nuclear deal was not seen as a vote-winner.

The Congress' reservations about the SP revolved around the reliability of that party as a partner as well as Amar Singh's capacity to extract his pound of flesh. There is already speculation in the capital that the SP has demanded, in addition to an electoral alliance in UP and dropping of cases against SP supremo Mulayam Singh and son Akhilesh, key portfolios such as power and petroleum at the Centre. While the first two demands have reportedly been accepted, the Congress will find it difficult to accept the third. Doing business with the SP is fraught with danger, as everyone from V.P. Singh to Mayawati will testify.

But these reservations were swept aside this week and then, suddenly, everything changed. With the window of opportunity to push ahead with the deal beginning to close, the PM once again pressed his point, stressing that it was not just his but the country's credibility at stake. If India desisted from taking the next step—going to the iaea's board of governors to finalise the India-specific Safeguards Agreement—it would be seen internationally as "an unreliable partner". And finally when the PM threw the brahmastra—reportedly threatened to resign, saying that his position was untenable—the party reluctantly fell in line. "It's an attempt by the Congress to reach out in the national interest," party spokesperson Abhishek Singhvi explained to Outlook, "to implement an agreement which it has always considered to be vitally necessary for public interest. It's a process of engagement and negotiation." And then, in an oblique concession to the Left, he added, "It is not an act of insult or defiance of anyone but something where we strained every sinew to take our allies within and without with us."

Of course, another reason why the Congress chose this point in time to give in to the PM was that the operative situation has changed since last year. "If we had taken this position a year ago," a party functionary told Outlook, "we would have been open to the criticism that we were incapable of providing stability and doing coalition politics. Now we are so close to the polls, that argument no longer holds." He also points out how the last few months have seen the Congress coping only with bad news. The party's defeat in the Karnataka assembly elections followed the electoral debacle in Gujarat. Then came the rising inflation and the growing cost of essential items of daily use which threatened to wipe out any memories of the government's impressive record in the social sector. "However much we blame spiralling prices on the international situation," says the party functionary "it is difficult to explain it to the people, especially as steps could have been taken last year when indications came in that food prices would rise. We allowed our foodstock buffers to dwindle and our ability to intervene in the markets was curtailed because we didn't want to check growth."

Earlier, the party had thought that it would win the assembly elections in Madhya Pradesh, Rajasthan, Chhattisgarh and Mizoram slated for later this year, setting the stage for the Lok Sabha polls next year. Now the reports coming in from those states are mixed. The only option, says this Congressman, was something that might make the government look "strong" and distract attention from the economy. "We are all wondering now," he says, "whether this N-bomb will wipe out the impact of the inflation bomb. If the deal goes through and there is a March election, that's the best scenario. However, even if we fail to get it through but are at least seen to be pushing ahead with it, we will go down all guns blazing. We can then tell the people: we put the national interest above the party's interest."

Of course, the Left leaders are hardly convinced by the Congress' reasons explaining its change of heart. They see the party's move as a "betrayal" for which they are blaming not just the prime minister but the Congress president as well. For the Left, the Congress decision means that for the first time since 1996—when the United Front government was in power for two years—its role in national politics will be severely curtailed. Even in the NDA years—1998-2004—it was a major opposition player. Today, it is left once again with trying to figure out who its main enemy is—the BJP or the Congress.

Simultaneously, the imminent collapse of the United National Progressive Alliance (UNPA) once the SP extends support to Congress reduces the Left's manoeuvrability. As things stand, the UNPA seems set to split up—the Indian National Lok Dal and the Asom Gana Parishad will gravitate towards the NDA; Babulal Marandi's breakaway JMM group will likely return to the BJP; the National Conference is on unsure footing in Kashmir. The TDP alone will tie up with the Left. The SP's decision to go with the Congress, therefore, has effectively snuffed hopes of a credible Third Front. A senior TDP MP told Outlook: "The SP owed it to us to talk to all of us in the UNPA before taking a unilateral decision, especially as the Congress is our principal rival in the states where we exist. We had been hoping that the UNPA, along with the Left parties, would be able to win about 120 seats and we could then form a UF-style government with Congress backing. Now all that's off."

Indeed, it was largely because of this anger that the UNPA meeting on July 3 ended in a postponement of any decision by three days. It gave the impression that the other partners were still being consulted; in fact, it bought SP more time to bargain with the Congress. Candid about the SP's expectations, an MP from the party, who is also a member in its core group, told Outlook: "We don't want an early election and we need to have an electoral alliance in UP for the Lok Sabha polls to contain the BSP. So, we will back the government." But while the SP's principal objective is to forge an electoral alliance in UP, Amar Singh and SP supremo Mulayam Singh Yadav are bargaining for more—dropping of cases against them (see Fortune Favours...The Favoured), and perhaps even a role at the Centre. 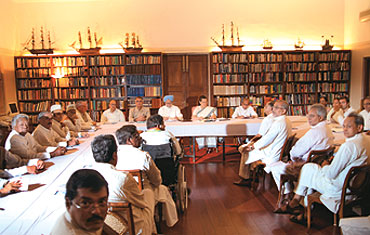 Of course, the SP also decided to postpone its decision as it wanted to wait till the Left actually withdrew support. Should it not come to pass, the SP could be left without any friends—no Left, no UNPA and no Congress either.

And what does a deal with SP mean for the Congress, apart from the possibility that it might be able to do the deal? Party sources say that a Congress-SP-RLD alliance in UP could bring in 45-50 seats and the break with the Left could make way for a Congress-Trinamool alliance in West Bengal. Given the Left Front's plummeting graph in that state, such an alliance could bring in 20-odd seats. Taken together—and provided the SP and TC don't bolt their stables after the elections, it could put the UPA back in the reckoning in 2009.

A Pilgrimage To The Shrine Of Reason