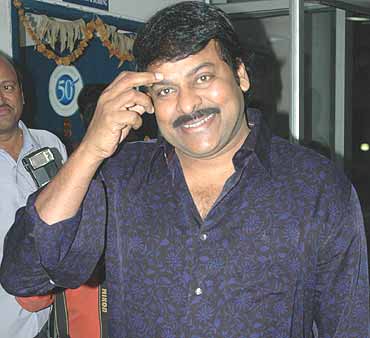 A fortnight ago, the actor held a press briefing to which sundry editors were invited. He was still playing coy, only going so far as to say that he needed 2-3 months before making any announcement. It was left to brother-in-law Allu Aravind to drum up the drama. "We are on the platform, but that does not mean we will board any train. We will board a train that takes us to our destination," he ominously announced.

The actor's supporters have been bandying about 'Mana Desam' (Our Land) as a possible name for their party with the rising sun as its symbol. While Chiranjeevi is no stranger to politics—he's been wooed by almost every party in the state, the TDP, Congress, CPI, CPI(M)—it is the recent "clarion call" of his own Kapu community that has set the ball rolling. A veteran film-maker who's directed Chiranjeevi in some early hits says the megastar is not keen on the caste tag since Kapus along with associate castes constitute a meagre 10 per cent of the state population. Besides, Kapus are predominant only in five districts—East and West Godavari, Krishna, Guntur and Prakasam. When N.T. Rama Rao made his stunning political entry in 1982, it was Telugu pride that was his slogan. It was much later that the Kamma caste tag attached itself to his TDP.