Of Dust, Of Light

That vaguely purposeful man in that dank room deserves it all 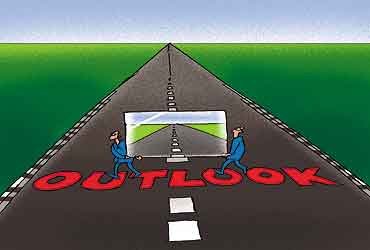 In a way, my first two encounters with the idea of Outlook pretty much adumbrated what the magazine was going to become. The first, with Deepak Shourie, in a swish bar—where he categorically declared he was readying to pulverise a leading publication, whose name I cannot now remember (sorry, Aroon, too difficult to resist!)—the first encounter was all about cool and swank and confidence. The second, in a dusty room of the crumbling, government-owned Lodhi Hotel—where illicit fornicators found refuge on hot afternoons—the second, with Vinod Mehta, was all about earthiness and self-deprecation and a sense of adventure.

In that spare room—a hotel bedroom converted into an office—on two plain tables, emptiness separating them, sat the two men. The air was rank, the curtains mouldering, and the light weak. When you walked in from the glare of the veranda it all looked even worse. Predictably, even I—casual "kamikaze" artist—did not immediately say yes. The two men in that dusty room were like the left and right of Indian politics. They also represented the content versus commerce polarity. The commerce man was all bristle and polish and purpose. The content man was, well, vaguely content—slumped in his chair, issuing few proclamations, stirring little.

Making them the two pillars of a new publication was a visionary act. Or an incendiary one. Somewhat like a coalition government of the Left and the BJP. Apart from staving off self-destruction, this axis also had the task of taking on the Congress: India Today, the behemoth, which for 15 years had reported, rewritten, managed, manoeuvred, stormed, tiptoed and ridden the wind to become the masters of the great Indian middlescape. As I signed on, after a second meeting—a drab Chinese lunch, where the content man came alive to the tinkle of cutlery and social-literary gossip—as I signed on, a sense of elation began to fill me. This was going to be the best kind of battle. David versus Goliath. Sri Lanka versus Australia—hopefully circa 1996. Impossibly tough odds, worthy adversary, no one willing to give you a ghost of a chance.

I knew a few things about the big boy. I had been with India Today—for a long five years—and understood its redoubtable metabolism. The virtues were many, all built around the principle of solidity. Rigour, caution, credibility, conservatism, the willingness to spend on news, generous salaries, high polish, a wonderful air of editorial superiority. This was not an animal that would roll over and die at the first sign of a challenge. This was not an animal you wanted to fight on its own turf.

When I signed up at the Lodhi hotel in the May of 1995, the team was still single digit and everything about the proposed publication—name, periodicity, thrust, tone, design—was under examination. Over the weeks and months some excellent calls were made. The smartest perhaps was the setting up of a new arena. The weekly. India Today, weirdly, was a fortnightly—perhaps the only example in the world of a leading news publication being on such a bizarre news cycle. The next—related to the first—was to intuitively understand that our triumph would lie in being nimble. India Today was an elephant—no doubt a very surefooted one—but not capable of dazzling moves and pirouettes of the imagination. It was great for reassurance but perhaps not for delight.

For all this, the content man was drawn from the very mould. Around his vaguely purposeful air a motley team began to coalesce. It was most heartening to see—an experience I underwent a second time while launching Tehelka, the paper—that the best journalists were still attracted by the idea of good and clean journalism. Not money, not brand names, just the promise of journalism.

Of course none of this strategy or sagacity could have been possibly visible to anyone—onlooker or participant. If anything—except for the commerce man—we looked like a ragtag campaign designed to gladden the hearts of the opposition. As the weeks rolled by in the summer of 1995, like a burgeoning harem we began to colonise room after room down the corridor (editors, reporters, subs, photographers, designers, illustrators, coming in from newspapers, magazines, television stations, and some out-of-workers). Sprawled on chairs, sofas, beds—in musty room after musty room—the gathering army lived amid a clamour of beer-and-biryani plans that created an air of collegiate chaos.

So it went on month after month. May, June, July...and then suddenly in August a tremor of purpose passed through the ranks. On the commerce man’s urging a prototype was put out: 16 pages, politics, features, essay. It was meant to showcase—to advertiser and reader—the excitement to come. It was, to put it mildly, an unmitigated disaster. The most common query we received was: isn’t 16 pages too little for a magazine trying to take on India Today? The dummy comprehensively cured us of the notion of editorial preparation. Everyone slumped back into beer-and-biryani, till we were suddenly carted off to a derelict market in Safdarjung Enclave, and expansively marched up and down two floors and a bunker. So it wasn’t a rumour—there would be a magazine at the end of all this after all. The rich man underwriting this carnival was holding his nerve.

Without another dummy run, with the hiccup of a week’s postponement—something to do with the inauspicious alignment of the stars—we eventually launched on October 11. The issue was finally reported on the run, edited on the run and designed on the run. For all the groundwork we had done, we could well have assembled not five months but a week ago. And yet the content man—more than the rest of us put together—justified his big reputation for creating buzz. A couple of stories—divined by him—got around. We were in business.

The triumph of any contender is to always look bigger than he is. When the aesthetic Cassius Clay took on the brute Sonny Liston he talked up such a storm in advance that Liston didn’t know what to expect when he stepped into the ring. The truth is, for a long time, in real terms—size of circulation, revenues—we were much, much smaller than we seemed. By assuming the air of heavyweight contenders, we had created the illusion of a size we did not really possess. It proved very useful. We worked with a cavalier confidence, and slowly the magazine began to acquire a distinct character, and the readers began to respond.

Many will take the credit for it, but in the end the magazine was what Vinod wanted it to be, who Vinod was. Every publication is finally only its editor. Of course it helped that many of us—quite different in backgrounds and temperament—felt the same way. As a collective, we believed in the idea of journalism. There were no other obvious agendas, political or financial. There was great delight in the story—in the picture, in the design, in the piquant controversy, in the magazine put together well.To a large extent this purity of calling was owed to Vinod.He had his failings: primarily an abstracted manner that created the most elusive of attention spans (he only came fully alive to the tinkle of cutlery and gossip). But in who he was, he was priceless. In an era of illiterate, coopted editors, he was one of a vanishing breed—a civilised editor, not consumed by bigotry, pettiness or delusions of grandeur. An editor who still read books; an editor who still valued the written word for itself, not as a link chain that led to the salons of the rich, the powerful, and the glamourous.

In a way, the vague purposefulness of the first meeting in a dusty room had held good. In a way the DNA of the magazine was firmly established in those early days.

The fact is vague purposefulness is the hallmark of liberals in media. And that is precisely what we were. A slightly elitist mush of left-of-centre sentiment. Believers in the social contract, believers in the underdog, believers in the whole souffle of secularism, liberalism, Indo-Pak peace, read the book, grow the tree, save the dolphin. At the same time committed with equal excitement to juicy Bollywood and cricket scams, political spats, fatuous debates, and entertaining morsels from anywhere and everywhere. All of it, even the high intent, was carried with a certain lightness—a tone and a posture that allowed self-criticism, dissent, talent and creativity to flourish. We may not have been the best, but there were worse things in Indian media at the time—dyed in intractable shades of khaki and red, allowing of neither objectivity nor joy.

All these open spaces led to many good things in the early years. The first big urban sex survey; superb special issues on Partition, on 50 years of Independence, and on the turn of the millennium; some great photo spreads; the marvellously incendiary essays of Arundhati Roy; and exciting exposes, prime among them match-fixing in cricket. No publication can be memorable without characters; no publication of character can be created without a memorable cast of characters. We had our share. Talkers, drinkers, louche theorists, chronic charmers, disgruntled journeymen, Oxonian highfliers, large picture artists, small detail virtuosos, eternal plotters, eternal complainers, eternal celebrants, unstoppable bulldozers. Anyone from those years can easily slot the cast of characters. All of them—in their own crazy ways—helped shape the tissue and tone of the magazine. If I look carefully a little bit of each of them lives on in the smooth pages.

No celebration can have meaning without a strand of sadness. For me there are two abiding ones. The accident that took away the best of Paddy from himself and from us. He became a friend in the early days of Lodhi hotel and there was much to befriend in him. He was of the ground and deeply connected to what should always remain the true fundamentals of journalism in India (for instance I knew he was one person who would have heartily approved of the desperate battle Tehelka waged for years against a virulent state). It can be safely said that Outlook’s political anchorage would have been far more solid had Paddy remained at the helm. Then there is the sorrow of Irfan. We lived through the nightmare of the quiet illustrator’s sudden disappearance, the ensuing hunt, and that steaming afternoon when some of us drove to Ghazipur to identify a decomposed body recovered from the bushes. Killed in a random act of car theft. Yes, those were his high leather boots.

By the time it was time for me to move on—March 2000, for more recklessly perfect, perfectly reckless endeavours—the magazine had transcended the illusion of being a contender to becoming a true one. Since then it has clearly gone from strength to strength—fatter, glossier, more expensive.Inexorably, the cycle of time has redistributed distinction and dereliction.Now as you drive past where it stood, the Lodhi Hotel is gone. But 10 years later, the idea that was borned amid beer-and-biryani in its musty corridors is a firm fixture on the Indian landscape. Let there be no doubt that the vaguely purposeful man in the dusty room deserves all the scotch—amid a symphony of cutlery and gossip—that he can possibly hold. To him I say, in deep salute: you are priceless, but make some place, there’s a better weekly looking for room.

(Formerly managing editor of Outlook, Tarun Tejpal is the editor-in-chief of Tehelka, and the author of The Alchemy of Desire.)