Of Cheques And Balances

As national icon, fame and fortune are his. Still, M.S. Dhoni makes a dash for academics. 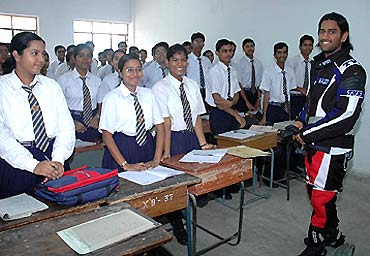 "The reason is very simple," Dhoni grins, as he talks about having enrolled himself for a graduate course at Ranchi's St. Xavier's College. "I want to be at least a graduate." For him, it's a degree of respectability, something that only education can confer. And Dhoni is unwilling to go through life without it. "When I have children and when they go to school and say that my father is an undergraduate, it won't be nice," he says.

Perhaps it's his small-town origins that have led him to consider college. Son of a migrant from Kumaon who started a new life in Ranchi as an unskilled worker, Dhoni was taught about the value of education. Yet, studies were not of overriding importance to him in Ranchi's DAV school, because cricket consumed much of his time. He wasn't, anyway, the type who leapt to their feet to answer questions. He studied when he had to, before exams. "In 10th I got 66 per cent, in 12th 56 per cent—it's up to you to judge how good or bad I was!" Dhoni smiles. "I started playing cricket, my class attendance declined, and it got very tough to catch up."