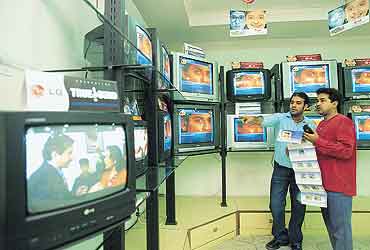 outlookindia.com
-0001-11-30T00:00:00+0553
The consumer durables and electronics segments had never had it this good. This year's pre-Diwali bonanza has been like never before. Sales shot through the roof. In practically every product area—from washing machines to colour TVs to refrigerators—growth during the September-October months was robust and in double-digit multiples. And, to top it all, the forthcoming marriage season holds more promise for them. Most companies recorded a turnover of Rs 200-250 crore in October itself, which was by far the highest for any single month.

Among the top beneficiaries of the festival boom were the two leading Korean giants, Samsung and LG. While LG clocked a near-unbelievable turnover of Rs 900 crore (nearly 25 per cent of its Jan-Oct sales) in the September-October period, Samsung's was an equally impressive Rs 320 crore in just the month of October (a sixth of its Jan-Oct total). In fact, Samsung witnessed a 50 per cent jump in CTV sales in October and recorded its highest-ever turnovers in refrigerators, washing machines and microwave ovens. In comparison, LG's sales jumped by 54 per cent over September-October last year, and its consumer electronics and appliances sectors grew by 63 per cent and 35 per cent, respectively.

Obviously, the companies are ecstatic. Explains Rajeev Karwal, MD, Electrolux Kelvinator: "The sales of high-end products were pretty good this season because there was a great move by consumers to replace their old appliances with new ones, especially in the refrigerator segment. The demand for low-end ones usually picks up because of marriages but with that season yet to come, low prices drove rural demand to a great extent."

In addition, say company managers, the boom was helped by factors like a stable economy, relative calm on the political front, and attractive financing options—mostly interest-free. All this was coupled with significant price reductions and festival offers by the companies. LG, for instance, gave away Rs 37 crore worth of gifts under its 'Pataka Ghumao...' offer and spent Rs 62 crore on promotions.

According to the Consumer Electronics and TV Manufacturers Association (CETMA), almost all categories of consumer electronics registered a growth of 25-30 per cent in October this year on a month-on-month basis, with the refrigerator and CTV segments growing by a little more. In fact, CTVs proved to be a total sell-out category. Over 12 lakh CTVs were sold during October (the figure for the same month last year was only 8.3 lakh). The best part was that the majority was the more expensive flat-screen TVs. To cite an example, LG sold over five lakh CTVs during the two-month season, which translated into a whopping growth of 189 per cent over the same period last year.

In the case of refrigerators, sales zoomed by over 20 per cent this October. In fact, Electrolux—the third-largest with a marketshare of 15 per cent—saw an over 50 per cent growth in sales in the frost-free category during the month. For LG, the growth was 46 per cent. However, the traditional low-end direct cool machines didn't move that fast as frost-free became the flavour of the season. Another product which did well was washing machines. CETMA estimates indicate that this segment grew by 20-25 per cent in October.

Generally, the October-March period is a hectic one for consumer electronics companies. But almost all of them were caught off-guard due to the volumes that peaked in a single month itself. However, a few analysts feel that not too much should be read into this boom because it was purely "incidental" as all the major festivals—normally spread over 2-3 months—came in October this year. Explains CETMA secretary general Suresh Khanna: "Last year, these sales were divided over three months as the festivals were spread from September to November.This year it all congregated in October."

Despite this coincidence, the companies are now gearing up for the next possible boom which'll be during the marriage season, also round the corner. However, no one is willing to hazard a guess about the volumes. Almost all of them are keeping their fingers crossed—hoping that the consumer will continue to buy on an event-based impulse, rather than a need-based one.