Maity has tamed water. And for long. Calcutta will see his 42nd solo next week. 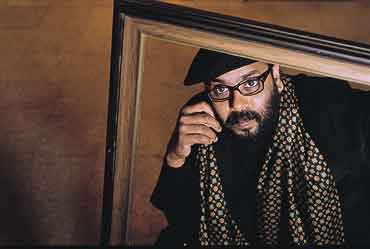 outlookindia.com
-0001-11-30T00:00:00+0553
Think of what Paresh Maity does as the artistic equivalent of tightrope walking without a safety net. Something that demands preternatural confidence and rare talent as basic inputs. Watercolour is a fiendishly unforgiving medium to work in. There is simply no margin for error. One slip, one false move, is all it takes to send a work into the dustbin, which is why most watercolour artists like to work small, for instance with paintings a foot across.

Paresh Maity routinely works in watercolours more than twenty times that size. He doesn't pretend that the medium is easy. "Water can go crazy; controlling it is very difficult," says the artist. He points at a painting of the Nile: "Look at this pyramid. You know how hard it is to draw a triangle with watercolours—wet on wet?"

That's why people like Chennai-based gallery owner Sharan Apparao rate his work so highly. "To paint something that's three by six feet in watercolours requires tremendous control over the medium, and there is no doubt that Paresh Maity is one of the best," she explains.

Maity is prolific too. On February 11, Calcutta's CIMA gallery will inaugurate his biggest exhibition. It will also be his 42nd solo show. That's a lot of work, though for Maity, who lives in Delhi, this need not be the hard part: "Sometimes I do not even draw; I just paint. I might do ten or twelve paintings in a day. Execution does not take time, but cooking up a painting takes tremendous creative effort."

Water doesn't merely define his medium. It's not an uncommon theme in Maity's paintings, and he says this reflects his roots in Tamluk, a small town 80 kilometres from Calcutta. The Bay of Bengal wasn't far away, and the Rupnarayan River ran through the town. "A boat is the only form of transport that is never static. It is always in motion, even when it is anchored, it has a lot of 'life'. That is why I always have both water and boats in my paintings. I love them both," he goes on.

High output artists work very hard, and Maity may soon have launched more boats than Helen of Troy. As he says, "I have not rested for years. I work constantly. When I sleep, I dream paintings. At social functions I look at people. I watch their faces, every emotion and expression and I keep recording it in my mind. It has been like this since I was young."

His friend, dancer Geeta Chandran, who along with her husband has known Maity for over two decades agrees: "He has a manic passion about painting. Even if he comes over to eat dosas for breakfast, he starts drawing on any paper he finds."

That's strictly preliminary work, since Maity loves the grain and texture of handmade Indian paper. It's hard to get locally, though, and he buys it in England for up to £85 for an eight-by-four foot sheet. "It's so thick that it is almost like leather. You cannot roll it," he says.

And the passion Chandran speaks of seems to flow nicely onto that paper. As she adds, "We love his energy and spirited colouring. He gave us a painting called Desire, which continues to inspire me to this day."

Which sits well with the consistency that has been a hallmark of Maity's oeuvre. Art dealer and Paresh Maity specialist Shobha Bhatia, who owns Gallerie Ganesha in Delhi, first met the artist as a young student. She says there was a maturity in his work as early as February 1990, when she held a Maity solo show. "To this day, there are some qualities about him that have not changed." 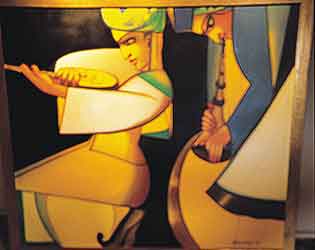 But consistency lays artists open to the criticism of predictability. Maity doesn't have the ability to surprise the art world the way artists like Sudarshan Shetty or Jitish Kallat, who like to explore new languages of expression, do. This can leave some critics underwhelmed, and in turn constrain genuine appreciation.But as Apparao explains, "It really isn't fair to compare artists whose minds are working in such completely different areas. The basic parameters are so different."

So though Maity has worked in oils, acrylic and charcoal, it is as a watercolour artist that he continues to be best known. But even if the medium is constant (unlike those boats), he is always seeking the new. Most of this comes through his travels. Maity does not necessarily paint in the city he lives in, preferring instead to work in situ. In the last few years, this has meant Digha, Kodaikanal, Goa and Venice. "I am on the move at least eight months of the year. A senior artist recently told me I should be recognised by the ministry of tourism!" says Maity.

"But I stay on the move because I cannot bear to be stagnant, neither in a place nor in any style. There is always a new element in my paintings each time and within every theme."

And there's the tightrope walking. Katayun Saklat, who owns Gallery Katayun in Calcutta describes Maity's way of approaching a large painting of the Vivekananda Setu (a bridge across the Hoogly river) that had been commissioned by ITC: "It was a tight deadline. He woke up early in the morning and started work. Midway he left. I asked him, 'Where are you going—you haven't finished!' He said, 'I know what size this will be. I am going to the framers so the frame will be ready in time.' He came back and completed his painting of the bridge by night, which was far more difficult than painting it by day."

Saklat just has to add what is perhaps the classic Maity anecdote, one that might taint most other artists with arrogance: "He has oodles of confidence. Once we were walking around in London, and just decided to enter a competition held by the Royal Watercolour Society. Paresh said, 'I'll participate and win'"