A young band does the Europe circuit. And they live to tell the tale. 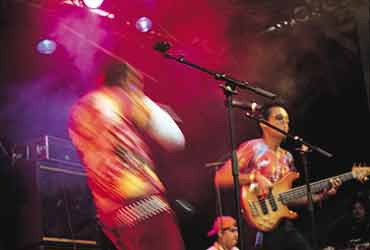 What are Sufiana and a dhol doing on a hard rock stage? Orange Street will tell you, once they’ve stopped kicking out the jams. The Delhi-based rockers are playing live in Sweden. And the cautiously headbanging (this is well behaved Scandinavia, remember?) crowd is cheering. They like it. Hey, hey my, my, they LIKE THIS!

The positive response to Orange Street’s music in Europe last month may have been spontaneous. I, travelling with the band on a continental rollercoaster, was witness to this affinity budding in strange places. But this story really began over a decade ago, when a young man in Allahabad decided there were better things he could do with life than grow his hair and play guitar in a part of India not exactly known for a high concentration of rock music fans. Amit Saigal never got around to cutting his hair but he started a magazine, Rock Street Journal, and an event, the Levi’s Great Indian Rock (GIR) festival.

Today, GIR has become a must-attend for fans of a diverse set of musicians, from Pondicherry’s shredding nu-metal band Medicis to the gentler sounds of Shillong’s legendary Lou Majaw. Saigal’s other innovation was to encourage bands to stop relying on cover versions of rock classics and to play their own compositions instead. Freed from the yoke of having to play The Doors’ Roadhouse Blues well beyond the point of nausea, bands like Orange Street began evolving their own sound, one that rocked hard, but at the same time paid its dues to an Indian heritage. The European tour is completely new ground for Orange Street. Only Hindustani classical singer Imran Khan has been abroad before.

Our drive from Stockholm to Borlange, where the band will be playing at the Love and Peace festival, covers some of the prettiest stretches I have ever seen, a perfect setting for a Shahrukh-Rani duet. Instead, lead guitarist Donnie passes me Orange Street’s new album, Dharma. The third track, More Pia, impresses me the most. The band has achieved some original fusion of Sufi and hard rock. Khan sings Bulle Shah’s sufi poetry, cleverly juxtaposed with the gravelly voice of lead singer Baan.

At Borlange, we’ve just missed major acts like Money Brother, Eldkvarn, Broder Daniel and Cre8, but made it in time to catch Motorhead and Hanoi Rocks, who are jamming together for the first time after a gap of over 10 years. And what a spectacle it is. Motorhead performs to a capacity crowd at around midnight.

The next day the nervous energy in Orange Street is so high that none of them even notice the emptiness around. An English band which is to play before them takes the stage. Some 50 people gather around when the English band do their sound check, which rises to about 100 when they at last begin their gig. Some signs of improvement, I tell myself.

Orange Street has been allotted one hour, which starts to moderate applause with the first number. By the end of the third song, the front rows have begun to sway to the music. Khansaab and Golu get a loud round of applause for their short solos. The crowd goes wild at the band’s version of Pink Floyd’s The Wall, the only cover in the set. I begin to sense a band-audience bonding now.The crowd has grown to 200, though the energy levels seemed to dissipate towards the end.

Still, at dinner later, everybody is talking about Orange Street as the surprise entry.There is certainly a buzz around the band.Some bands are keen to come to India and perform at gir. I see a glint in Amit’s eyes; he has smelt blood here. We party and drink ourselves silly all night. Tomorrow, we are driving back to Stockholm for two more gigs.

When we get there, though, alas we find that both gigs have been cancelled due to bad weather. Instead, we get to meet Steve Roney. Steve visited India in 1961 for the first of many times. Musician, cultural czar, talent promoter and the father of Sweden’s most famous film star, Shanti Roney, Steve runs an alternative cultural forum, Multi-Culti, which among many other activities helps promote young artists. Steve promptly gets Baan and Imran a recording assignment with a studio to record for a world music album they are producing. And the best part: both net a tidy 1,000 kroner. We drive 500 km south to reach Gothenburg only to find ourselves rained out yet again. Next stop: Oslo, Norway. The band rocks at an Oslo club, before moving on to Tonsberg, a breathtakingly beautiful venue for a music festival. The Slottsfjell Festival is held on the meadows around an old Norwegian castle. Though the band doesn’t play at prime time, the response is good. As at Borlange, people in the audience suggest more Indian elements in the mix.

We’re now at the Cargo, an East London club, and Baan is singing his heart out. The band is playing for the second time in 24 hours, though the previous time was hundreds of miles away in Tallinn, Estonia, for the Sundance Music Festival. There, to our amazement, a white stretch limousine was waiting for us at the airport. In rock star style, we arrived at the festival in the limo. And the band performed to a record crowd.

Back in London, the Cargo gig was part of a 10-day festival, The Little Chilly, organised by Viram Jasani. Jasani imports Indian talent, somewhat indiscriminately, as we were to discover at the Nottingham mela. The band quickly finished their act before an audience that was far more interested in seeing the Nottingham-Dashmesh Musical Choir beat the dhol... and Baby Happy and Baby Honey gyrate to Chaiyya-Chaiyya.

The good news at the end of the tour: There is a distinct possibility that a major record label will release Dharma in the United Kingdom and Australia.

Next year, Levi’s-Great Indian Rock will promote a different band on this circuit. But this moment is Orange Street’s. They may not have thrown their shirts at the crowd, rocker style, but they have not, by any reckoning, lost their shirts either.