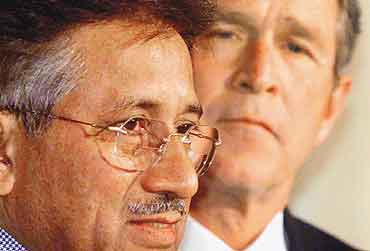 Should Musharraf succumb to US pressure, it wouldn't be the first instance of his acquiescing to Washington. Following the 9/11 attacks, the Musharraf administration had allowed American nuclear experts, grouped under a US Liaison Committee, to secretly spend millions of dollars to safeguard around 50 nuclear weapons in Pakistan's arsenal. Diplomatic sources say the committee meets every two months and is helping Pakistan develop state-of-the-art security, including secret authorisation codes for the arsenal. "Although the US wants to prevent Pakistani nuclear materials from falling into the wrong hands, it can't go over the edge of the Nuclear Non-Proliferation Treaty (NPT) which prevents a direct involvement with any country's nuclear weapons," one of them said.

Diplomatic sources say the American intelligence community believes Pakistan continues to develop and expand its nuclear weapons capability. It possesses between 600-800 kg of weapons-grade highly enriched uranium (HEU); and 1.7-13 kg of separated plutonium. These quantities are sufficient to produce 40-50 nuclear bombs or warheads which with their fissile cores are stored separately from non-nuclear components. Since Musharraf insists on not compromising Pakistan's minimum nuclear deterrence, the Bush administration has expressed its desire for the joint Pak-US monitoring.

Against the backdrop of Dr Khan's confessions, the Bush administration fears a Pakistani nuclear weapon or fissile material could fall into the wrong hands. These sources say that Gen Musharraf's repeated assertions that Pakistan's nuclear assets are 100 per cent secure have already been proved wrong, prompting Washington to demand the installation of NWCS in Pakistan which would bolster security. The Command and Control (C2) system comprises telecommunications lines between command posts, as also early warning information systems involving satellites and radars for detecting enemy launch and millions of lines of computer code for the filtering and correlation of data.

In offering assistance, the US has asked Pakistan that its nuclear weapons be disassembled, with their components stored in separate vaults or locations; that the procedures for accessing these components and assembling them involve several individuals from different parts of the government; and that it should be a fundamental principle that no one person gains access to an assembled nuclear weapon, or all the components for a complete nuclear weapon. But the Pakistani side is understood to have informed the Americans that the country's nuclear weapons are not kept in deployed form. "The bombs are in one location; their delivery systems in another, mating them would take two to three days," the Americans were reportedly told.

In fact, a senior American official told Reuters on February 16 in Washington: "The United States is working with Pakistan to protect its nuclear technology from falling into the hands of extremists. We have had discussions with Islamabad on the need (for the regime there) to safeguard its technology and its nuclear material. We are confident they are taking the necessary steps." 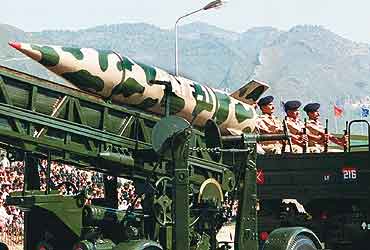 Approached for comments, a Foreign Office spokesman expressed his ignorance about any such American demands, adding that Washington did offer foolproof security arrangements for Pakistan's nuclear installations after Afghanistan was attacked in 2001, but Musharraf turned it down. He also confirmed a US offer to Islamabad to train Pakistani experts for security and protection of the nuclear assets, but said Islamabad wasn't bound to accede to any such demands.

This spokesman recalled Musharraf's interview in The Financial Times last fortnight in which he categorically asserted that Pakistan would never allow foreign inspectors to monitor its nuclear installations. Musharraf told the newspaper, "Why should Pakistan allow anybody to inspect? We are not hiding anything.... What is the need of any inspection? I believe in the army dictum that a commander is responsible for all that happens or does not happen in his command—and to that extent the president is responsible for all that happens in the country."

Responding to the American demand for signing the CTBT, the spokesman said, "Pakistan's nuclear weapons are for deterrence and Islamabad would prefer signing a no-war pact with India rather than sign the CTBT." He further said that, in contrast to India's stand, Pakistan had endorsed the CTBT but reserved its judgement about signing it. He explained, "Since India opposes the treaty, Pakistan maintains it wouldn't sign as long as New Delhi refused to do so. Pakistan can't unilaterally accept obligations which tend to compromise its nuclear programme."

Musharraf has been claiming he would not allow foreign inspection of the country's nuclear installations. But Khan's confession has weakened his ability to withstand the US pressure. There's also a feeling that Washington could twist his arms through threats of imposing sanctions or holding back economic assistance promised to Islamabad.