No map mentions the place. You need to visit it to believe it exists. 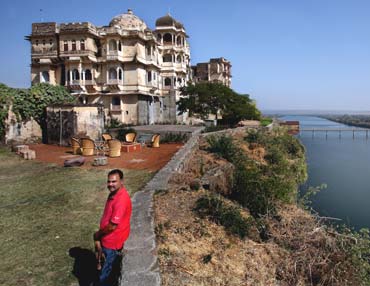 outlookindia.com
-0001-11-30T00:00:00+0553
Is there anything left to discover in Rajasthan, or has every last mahal, qila, kund and chhatri been photographed and written about to the point of boredom? A chapter in a book written 200 years ago sparks the hope that something rather amazing still lies undiscovered—a place described by the author as one of Rajasthan’s most romantic castles, though it comes with the decidedly unromantic name of Bhainsrorgarh. But after that lyrical 19th-century account, Bhainsrorgarh is inexplicably missing from guidebooks, maps, brochures and tales of the ‘Royal Rajasthan’ circuit. So we set out in search of it.

Not easy. Even the taxi drivers at Kota, said to be the nearest town, have never heard of it. After a fruitless hour driving around Kota, searching in vain for signposts, we begin to fear we’ve come on a wild goose chase, that our journey will begin and end in this grimy industrial town with a guided tour of its famous coaching colleges.

Then someone suggests we take the road heading southwest of Kota, and our quest for this forgotten jewel of Rajasthan begins to look even more unpromising—parched, dusty terrain, littered with shattered shards of Kota stone, the only crop this land yields. Forty minutes into our journey, a sinister sight presents itself, and we begin to understand why this corner of Rajasthan has fallen off the map. The towers of the Rawatbhata nuclear plant loom on the horizon, enveloped in the early morning haze.

A few minutes later, the road takes a sharp turn and there is a startling change of scene. Perched on the edge of a cliff rising above the translucent green waters of the Chambal stands Bhainsrorgarh, its battlements, turrets and cupolas dramatically silhouetted against the orange glow of the rising sun. The road continues over a bridge across the Chambal and climbs up the hill, to reveal an entire village hidden within the ramparts of the fort. The bells of the morning arati are just beginning to ring out as we reach the gates of the castle. We’ve travelled one hour from Kota and a few centuries back in time.

Little has changed since Col James Tod, the British political agent in Rajasthan, came here in the 1820s, and declared that if he could choose one fiefdom in the state, he’d pick Bhainsrorgarh. His Annals and Antiquities of Rajasthan still remains your best guide to Bhainsrorgarh and its environs. There are pages of poetic description of the fort’s spectacular location, its surrounding forests teeming with tigers, its lush fields and orchards, the "unrivalled" temples of Baroli, and the warm hospitality of his hosts. It’s all still there—except for the tigers. 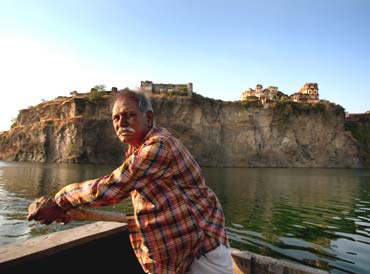 What’s new are five enchanting suites in the castle, recently refurbished for tourists. And what they offer is a rare, authentic experience—not of pompous, self-conscious, ‘royal Rajasthan’, but of the life of the rural gentry, whose savoir vivre shuns unnecessary frills and luxuries, but celebrates the good life in its own way. Bhainsrorgarh was never a pleasure palace—it was built as a rugged fighting fort. It boasts no sheesh mahals, marble halls or delicate jaali screens, but solid granite pillars framing deep verandahs, airy, light-filled rooms, and a profusion of jharokhas that give you magical vistas of the surrounding countryside. With the broad, deep river in front, a vertical cliff below, and the rocky hills of Mewar behind, you can immediately see why this fort has remained impregnable throughout its history.

The owners of Bhainsrorgarh, Rawat Shiv Charan Singh and his son Rajveer, are reluctant to alter the original character of their fort, with its comfortably shabby ambience, to cater to what tourists might expect of a "heritage" property. There are no turbaned retainers here, only eager-to-please village boys still figuring out how to place the knives and forks. No folk dancers are brought in in the evenings. The old stables overhanging the cliff are left in picturesque dilapidation, so too are the haunting ruins of a long-collapsed wing of the castle. Their USP, says Rajveer, is that Bhainsrorgarh offers the warmth and thoughtful comforts of a family home that has been continuously occupied since it was built in 1741, when it was granted as a jagir to his ancestors by the Maharana of Udaipur. 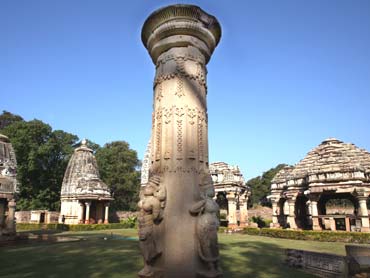 Spires of piety The Baroli temples, dating from the 9th-11th centuries, are another forgotten treasure in the neighbourhood

It’s an attitude towards hospitality that not only keeps Rajveer in constant, though discreet, attendance on his guests, it also results in superb meals, prepared by the ladies of the house. The emphasis is on local cuisine, made from produce grown on their own land. We develop an addiction to Mewari dhoklas—made of corn, shaped like little teacups, drenched with ghee and served with delectable lal maas and safed maas. We feast on baajre-ki-roti and home-made achaars. And we discover that those staples of Rajasthani cuisine, baati and gatte-ki-sabzi, can be melt-in-the-mouth light if made by an expert hand.

You can digest these sumptuous meals lazing on the castle’s rooftop pavilion, sipping mahua liqueur, as you watch crocodiles sunning themselves on the riverbanks. Or take a boat across to the guava orchards to pick fruit off the trees; hike through the reserved forest around the fort, all the way to a Bhil village beside a lake; stroll in the gardens which lead down to the riverside chhatris, or head to another forgotten treasure in the neighbourhood—the Baroli temple complex, dating from the 9th-11th centuries.

"To describe its stupendous and diversified architecture is impossible," wrote Col Tod, who then went on to fill eleven pages describing the "unrivalled taste and beauty" of Baroli’s sculpture and architecture. He wasn’t exaggerating. The Baroli sculptures, colossal in size, exquisite in detail, and hewn from a lustrous white stone, are heart-stoppingly beautiful. Historians ascribe the temple complex, dedicated to Shiva, to the Pratihara dynasty. Local lore, however, holds it was built by a Hun king, whose territory included the prosperous village of Bhainsror, established much earlier by a trader named Bhainsa Sah and a Banjara named Rora (finally, an explanation for the fort’s tongue-twister name).

Some years ago, Baroli’s treasures—and its isolation—caught the attention of a notorious Jaipur art dealer named Vaman Narayan Ghiya, who prised some of its finest sculptures off the temple walls, using tyre jacks. The good news is that painstaking detective work by the Rajasthan police has led to some of them being recovered from Europe. Ghiya is now behind bars, and the sculptures may soon be back in Baroli—an aptly fairytale ending for a story told to us in a fairytale castle.

Bhainsrorgarh is an hour’s drive from Kota. For details of stay, contact rajveersingh@bhainsrorgarh.com.