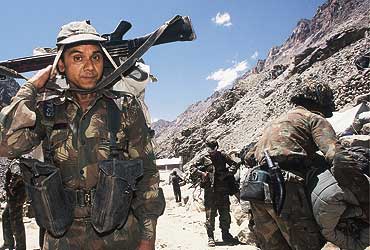 outlookindia.com
-0001-11-30T00:00:00+0553
For five days after he returned from Nepal, India’s Chief of Army Staff (COAS) General Sundarajan Padmanabhan had been meeting his principal staff officers at the army headquarters, New Delhi, to chalk out strategies India must employ in dealing with Pakistan in the light of the heightened tension and war hysteria following the May 14 massacre in Kaluchak. After intense deliberations, the conclusion the army top brass reached was that an all-out war would not achieve the immediate objective of curbing terrorism. At least, not yet.

Laying it out in clear terms, a senior serving general told Outlook: "The December-January mobilisation of the armed forces was the clearest signal to Pakistan that India meant business but once time went by, the effectiveness of the massive deployment wore off. After nearly six months of deployment, any tactical surprise we may have had was also lost. Therefore, we came to the view that a full-fledged war at the moment is out of question."

In separate briefings to Outlook in Delhi and at the 15 Corps in Srinagar, top army officers spelt out their reservations against launching a full-scale war. Chief among the restraining factors has been the lack of any clear directive from the political leadership about the objective such a war might achieve and the realisation that the cost of sending 1.1 million troops into a war without focus would be too high and "not commensurate" with the end result.

Already, the cost of deployment on the borders since December has been estimated at Rs 4,000 crore. Additionally, the wear and tear of equipment and the erosion of troop morale has begun to worry the army top brass. Asks a general: "Apart from putting the troops through untold hardships in the heat of the Rajasthan desert, what have we achieved in mobilising such a large number of troops?"

A full-fledged offensive may also not bring an end to cross-border terrorism in Kashmir, say senior officers. Moreover, political and diplomatic assessments suggest that India’s image of a restrained, mature country will be tarnished if it initiated hostilities across the Line of Control (LoC) and the International Border (IB). In that, it would lose much of its diplomatic advantage. Finally, the army was told that the primary objective as of now was to hold peaceful and fair elections in Jammu and Kashmir. "Having been told that elections are the first priority, we had to readjust our focus on internal security in J&K," a senior officer at Srinagar’s 15 Corps headquarters told Outlook.

So was the talk of war just rhetoric? At one level, yes, since war, in the conventional sense, was never the first option. The army brass says it understands the compulsions of the political leadership, but within the given constraints it wanted precise directives and these did not emerge. "One day the signal is, be ready for all-out war. Within 24 hours, we’re told to explore the option of a limited war. Such indecisiveness hampers our plans," a top army official said.

Take, for example, Prime Minister Atal Behari Vajpayee’s statements during his three-day tour of J&K. Addressing the jawans at Kupwara, close to the LoC, he said: "The time has come for decisive action," adding, "My visit here is a message in itself." This gave the impression that India was preparing for war. The very next day, addressing a press conference in Srinagar, he said, "The skies are clear of war clouds for now," but warned that lightning could strike any time. "I hope that lightning will not fall."

Having factored in these politico-military concerns, the army headquarters decided that notwithstanding the restiveness within the ranks over the "high-alert" deployment for the past six months, it was prudent to advise the government against a full-fledged war. Accordingly, the army has begun to redraw its strategy. As a first step, several of the infantry units stationed along the IB in Punjab and Rajasthan will now be redeployed in J&K both for offensive and defensive purposes. The armoured strength and mechanised infantry will, however, stay deployed in the plains, say army sources.

Since the plan at the moment is to concentrate on ensuring violence-free polls in J&K, additional troops will be required to plug the loopholes in the counter-insurgency grid. They will thus be engaged in internal security in the run-up to the polls slated for September-October. The army is certain that more and more militants would try to infiltrate in J&K as elections draw near.

As a senior official in the Srinagar-based 15 Corps told Outlook, "Infiltration in our area has just started and two encounters have already taken place. Where infiltration once took place in bands of 10 to 15, it is now restricted to groups of two to five individuals. This is partly because increased patrolling of the LoC has made it harder for larger groups to slip across, with sensitive spots being closely monitored." Information with the army and the intelligence agencies in Srinagar suggests that there are about 2,000-2,500 militants in training camps in PoK, some of whom could well be absconding Al Qaeda or Taliban members. Of these, some 800 to 850 are said to be located in "launching pads" just across the LoC, armed and waiting to slip in once the snows melt.

In the event of a "surgical strike" (see Limited Means) becoming the favoured course, it is these 36-odd camps and launching pads that will be the primary targets. While intelligence agencies have identified 123 such camps in Pakistan and PoK, only 36 are believed to be currently "active". For example, in the Jungle Mangal camp, some 40 km from the LoC, 80 to 100 militants are waiting to be "launched". Domel, which is only 15 km inside PoK and co-located with a Pakistani army unit, houses some 60 to 70 militants. In Kel, again in close proximity to a Pakistani army unit, there are 30 to 40 militants. Chakathi, where a Pakistani army post was burnt down in Indian firing last week, had 150 to 200 jehadis while another 40 to 50 militants are based in Tobet.

All this, says a senior general, narrows the focus from war in all theatres to an intensified vigil in J&K. "Many people think that a full-scale war with Pakistan is a picnic. But it is serious business. It is one thing for politicians to say that the army must teach Pakistan a lesson but quite another to do just that," he says.

In the Jammu area that comes under the 16 Corps, daily exchange of fire between Indian and Pakistani forces across the LoC has escalated sharply since May 14, the day of the Kaluchak strike. Tracers are being fired every day and on May 23, firing across the IB resulted in massive damage to three villages near Hiranagar, a couple of hours’ drive from Jammu. With the snows melting, the LoC here has become active in the last one week, with massive shelling on May 21 in the Uri sector, resulting in at least four civilian deaths. Army officials say that although firing is a regular feature, this time the intensity is higher than in previous years.

The current shift in strategy is thus twofold: increase the deployment of troops along the LoC, and inside J&K. The objective is to provide additional strength to the forces on the border and beef up the security in what is called the "depth area" in the rear. By doing so, the army wants to ensure that militants already inside J&K cannot repeat Kaluchak. On the 740-km-long LoC itself, the deployment is intense. Says a commanding officer posted along the LoC: "The level of deployment is very high and will continue to remain so for the foreseeable future so that Pakistan continues to get the signal that we mean business."

A full-blown war, however, is being considered a remote possibility as of now even by retired generals and strategic experts. Says Lt Gen (retd) D.B. Shekatkar, a former commander of the crucial 8 Mountain Division, engaged in counter-insurgency operations in J&K, "In the current scenario, the biggest challenge is to prevent an all-out war. It is in fact the last option. Since our first objective is to eliminate terrorism, we should make the terrorists and their sponsors pay a heavy price for their actions." Agrees Lt Gen (retd) Vijay Oberoi, a former vice-chief: "I hope we are not the ones to start the war. We should punish them (the jehadis), raid and hammer their camps. If the other side escalates the conflict, the onus will be on them." Adds Air Marshal (retd) S.K. Kulkarni, director of the Pune-based Centre for Advanced Strategic Studies: "Though a limited war can’t be ruled out, it’s doubtful it will escalate into an all-out war."

International and diplomatic pressures have, of course, been playing a big part in the flip-flop of the political establishment. For the US, an India-Pakistan war would impact its anti-terrorism campaign against the Al Qaeda. The UK and the European Commission see a skirmish in the subcontinent escalating into a nuclear conflict and are therefore exerting pressure on both countries to desist from war.

At a meeting with the Unified Command in J&K, comprising the army, the state police and the paramilitary forces, Vajpayee was told that the situation along the LoC was under control and could be tackled effectively with the current strategy being employed. Later the same day, on May 23, the Cabinet Committee on Security (CCS) endorsed the army’s view of a full-fledged war not being necessary at the moment. "The plan as of now is to have a calibrated, well-thought out response to the situation that will include both military and diplomatic aspects," a senior army general told Outlook.

Much, thus, depends on Musharraf delivering on his May 22 promise that "Pakistan’s soil will not be allowed to be used by terrorists". If he fails to match his words with deeds—as Vajpayee said in Srinagar—India may have to rethink its strategy again. And a full-scale war may well be part of it.

Nitin A. Gokhale in New Delhi and Bhavdeep Kang in Srinagar