Will Radical Islam hijack what has been a democratic Spring? 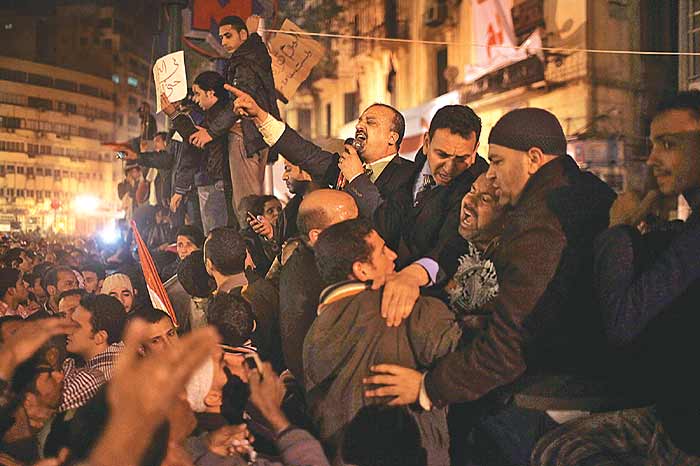 Am I allowed to wear a necktie? I was a 17-year-old Muslim growing up in England in the early 1990s, and questions like this dominated my daily life. Born and raised in London, I was British. But my parents were from India and I looked different: brown skin, black hair. At the same time, thousands of blond, blue-eyed Europeans were being killed for being Muslim in Bosnia.

During that teenage identity crisis, an older friend I had met at a mosque gave me a magazine with a picture of an Egyptian imam from the 1940s, wearing a tie and jacket, albeit with a traditional fez! All the imams I had seen in London mosques wore flowing Arabian robes. On television, representatives of the “Islamic Republic of Iran” refused to wear ties and Saudi kings never wore western clothes.

Looking at that picture of a kindly, smiling schoolteacher, I could not know how deeply he would influence so many of us. Even today, few outside the Arab world would know of him, yet Hassan al-Banna may just be the most influential Arab of the past century. I began to read his writings: he spoke out against British and European influences on Muslim life in Egypt; he sought to return Muslims to a form of puritanical Islam, free from the influences of secularism; his own life was an example of resistance, rebellion and activism. His legacy was the Muslim Brotherhood, the precursor of virtually every Islamist movement in the Middle East today. It is the most enduring and effective political force in the Arab world.

For five years, I became a fervent Islamist, moving up the ladder of increasingly radical organisations. All strands of this movement descend from the teachings of Al-Banna. He fought against the British in Palestine, trained a paramilitary organisation and his members killed Egypt’s prime minister in 1948. In response, the Egyptian state had him assassinated a few months later.

Yet I learned, through bitter experience, that Islamism is far from unitary or coherent. In the end, I quit what’s called “the Islamic movement” because I found it too controlling of my life—but also because I no longer wanted to be in a perpetual state of confrontation with the west. Yet it took me several years of travel and study in the Middle East before my mind was free of Islamist influences. I remain a follower of Islam, the religion, but not of Islamism, the political ideology.

Because I was once a part of this global movement—whose primary goal has been the creation of Islamic governments—and then established the world’s first counter-radical think-tank, Quilliam, in London to oppose their ideology, I have been following the Arab uprisings with more than a passing interest.

There is a widespread fear in the west that Islamists will seek to hijack the revolutions. On February 12, the morning after the Mubarak regime fell and the largely secular, youthful revolutionaries celebrated on the streets of Egypt with fireworks, music and dance, the leader of the Muslim Brotherhood was quick to note that this was the date on which Al-Banna was assassinated in 1949 (secular liberals retorted by noting that February 11 was the date on which Nelson Mandela was released from prison). Where some saw hope for a free and secular Egypt, the Brotherhood saw the hand of God and an opening for an Islamic state.

In coming months, not only in Egypt but in other countries across the region, the war of ideas between liberal secularists and Islamists will rage about their visions for how to succeed the fallen, secular dictatorships.

What struck the world about the Arab uprisings was that burning of US and Israeli flags was not a central display. The protesters wanted focus on national issues.

But exactly what does an Islamic state look like? What does it mean, in real terms, for the countries of the Arab Spring, such as Egypt, Libya or Tunisia?

I went to Egypt after the revolution to put these questions to leaders of the Muslim Brotherhood. Many had served prison sentences for their cause. I spoke with old-school hardliners within the Brotherhood, such as 83-year-old former leader Mehdi Akef. I also spoke with the renowned liberal Abdel Moneim Abou el-Fotouh (now an independent presidential candidate in Egypt). I met with younger members of the Brotherhood and its parliamentarians such as Mohammed el-Beltagy.

I asked each of them, “What is an Islamic state?”. The answers differed widely. For Akef, it was about Shariah becoming state law; for Abou el-Fotouh, it was vaguely about social justice; for Beltagy, it was responding to the needs of the people. For younger members, it was a liberal state reflective of Islamic values. When pressed, however, none of them could articulate what this new society might look like.

In some ways, this is good news because it means some Islamists are open to persuasion and influence. In other ways, I thought, it was this very intellectual inconsistency that had led me to leave the Islamic movement; this incoherent and muddled worldview for which they expected me and other members to give their lives. Like Marxists, they had all sorts of criticism of state and society, but when pressed to provide policies for alleviating poverty in Egypt, they had no answers. To my mind, they were clutching at straws, because Islam has no specific prescription for government. 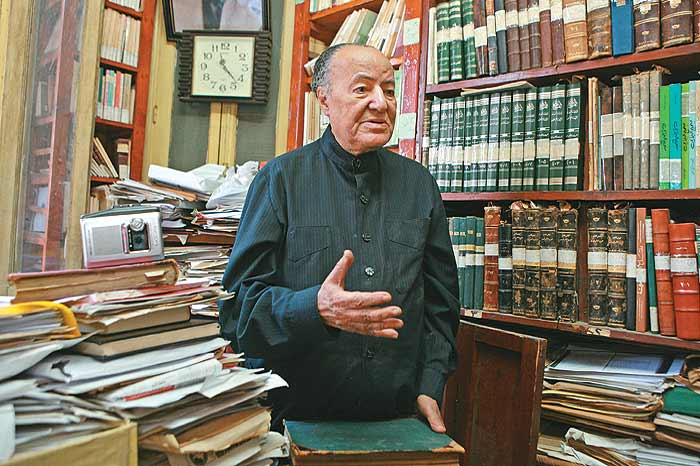 In Hassan al-Banna’s emotional response to the British empire, and his desire to differentiate his ideas from capitalism and communism, he helped birth a modern ideology, ‘Islamism’, which tried to politicise Islam. But he found very little in that ancient religion that spoke to the economic and political needs of a modern world. Abou el-Fotouh and other leaders of the Brotherhood insisted that the Brotherhood believed in human rights, and therefore the west had no cause for concern about Brotherhood-led governments. In some ways, this was their response to being imprisoned under Mubarak in harsh, inhuman conditions, as thousands of them were. But I knew that Abou el-Fotouh was not transparent on this. In the same breath as his advocacy of human rights, he said to me that if the Egyptian Parliament passed Islam-based laws that called for amputating thieves’ hands, stoning adulterers, or beheading murderers, then what was wrong with that?

And he was the liberal. To his credit, unlike the others, he engaged me in conversation to challenge his views. I raised with Abou el-Fotouh the 800-year-old debate within Islam about what is called the maqasid, or aims, of the Shariah, which are to preserve life, property, religious freedom, family and knowledge. The Shariah is not about stoning and killing, I argued, but about upholding the preservation of these five things. As early as the 1350s, the prominent imam Abu Ishaq al-Shatibi had articulated this argument, essentially saying that any society that preserved these five things was, in effect, an Islamic society.

What stops today’s Arab Islamists from taking this approach to an Islamic state instead of outdated, cruel punishments and the denial of rights to women?

I know from my time inside the Muslim Brotherhood that it spent five decades trying to survive, to escape the crackdowns of military dictatorships in the Arab world. Its members have not had the time and leisure to think and develop in the real world. Where they have had opportunities for both, as in Turkey for example, they have tended to become centrists and realists.

Islamism and the meaning of an Islamic state, therefore, is a work in progress. Islam is rich enough to offer alternative readings of scripture to undermine the claim of the hardliners that Shariah must necessarily mean barbaric punishments. Indeed, most Muslim-majority nations have moved beyond such practices.

While the Brotherhood might be deeply divided on almost every question of the day, there is one question on which it has an almost unified, hostile response: Israel. Across the Islamist spectrum in Egypt, I heard no conciliatory language toward the Jewish neighbour.

This dark cloud is a real cause for concern. Egypt, like other Arab nations, continues to feel humiliated by perceived Israeli injustices. Unless there is a palpable movement to grant justice to the Palestinians and bring about an end to Israeli occupation, the urgent need to push for Israel’s integration among Arab nations cannot hope to begin. With the strong likelihood now that Islamists will assume positions of power in Arab countries, there is a real chance of greater conflict, and thus further radicalisation, in the region. The conflict with Israel does not only rile Islamists, but liberals too.

In the lively mix of Egyptian and Arab public figures is Hassan al-Banna’s younger brother, Gamal. I met the 90-year-old Gamal two years ago. Those of us who left Islamist movements see in him something of ourselves: the ability to think freely and to defy the diktats of the Islamist movement. But even Gamal, a thorough liberal on everything from gender equality to religious pluralism, spoke out in support of suicide bombers who attack Israelis. He is not alone in abandoning reason and logic and embracing emotion and anger when it comes to the conflict of Arabs and Jews.

Ending that conflict, or at least the violent solutions to it, is the real challenge. The world was struck by Arab uprisings in which the burning of American or Israeli flags was not a central display; instead, the protesters focused on internal, national problems. And that is how they must continue. Given time, the Islamists, too, can be steered toward a Turkey-style combination of Islam and secular democracy. But the journey risks being derailed by a flaring up of the Arab-Israeli conflict, turning young minds away from seeking answers to pressing questions of development and democracy and toward war and vengeance.

Ed Husain, Sr fellow for Middle East studies at the Council on Foreign Relations, author of The Islamist