Now, Is That Malevolence?

A group of men's right activists claim the feminist agenda has pushed ahead so far that men are now the worst victims. 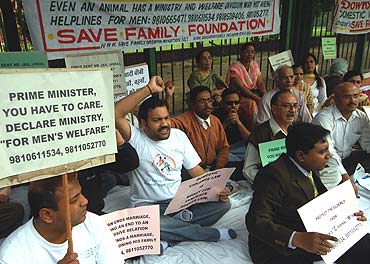 In Defence Of Men's Rights...

On August 26 this year, International Women's Equality Day, yet another demonstration was under way at Jantar Mantar, the centre of gravity for social protest in the nation's capital. No one driving by would have spared the protesters a second glance, except that the bunch shouting slogans-- "Hai Hai", "Down Down"-- was an incongruous one: software engineers, corporate managers, officers of the merchant navy and marketing execs. More incredible were the signs they were carrying: 'Stop Legal Terrorism. Stop Husband Suicides', and 'Protect the Elderly from the NCW', NCW being not the National Commission for Women but 'National Criminal Wives'. On Women's Equality Day, the centrestage belonged to one of the most unexpected byproducts of the women's rights movement: a movement for men's rights.

Spearheading it is Save Indian Family Foundation (SIFF), a front organisation, formed in 2005, the year the Domestic Violence Act came into force for a nationwide group of some 8,000 men. SIFF and their affiliates have a novel view of women’s equality in India -- that the feminist agenda has pushed ahead so far that men are now the worst victims.