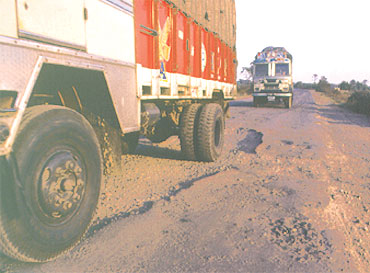 outlookindia.com
-0001-11-30T00:00:00+0553
Roads, as much as any other form of geological life, are inevitably subject to wear and tear. Just six years ago, the Delhi-Jaipur highway symbolised India's aspiration to join the league of developed nations with smooth grey runways that made cruising at over 100 km or more a reality. Today, the potholes in the same stretch are symptomatic of the many problems plaguing our ambitious programme to upgrade 33,000 km of highways, slivers of tarmac that could fuel the movement of people, commerce and the great Indian dream.

We are not there yet—by a long stretch. There have also been immense setbacks. Now, in his second innings, Prime Minister Manmohan Singh seems determined to reverse the downtrend. No more is he willing to take the flak for letting ministers from among the UPA's political allies hijack crucial infrastructure projects—the opposition to inducting former minister of transport T.R. Baalu, who belongs to ally DMK, into this government's cabinet is a clear indication.

The government says it plans to hit the ground running. To start with, the Rs 40,000-crore infrastructure stimulus will provide easy funds for public-private partnership (PPP) projects. With contracts for around 1,000 km of roads to be awarded this year, there's a push to clarify terms governing the award of PPP contracts. The National Highways Authority of India (NHAI)—mandated with the task of overseeing the highway programme—will now award contracts only after all the legal clearances and most of the land acquisitions have been completed. There's also talk of restructuring NHAI; proposals include having a fixed tenure for the chairman.

Of course, there are immediate concerns. The highway programme has been one of the major casualties of the global slowdown, hit simultaneously by high interest rates and the flight of foreign capital. With contractors struggling to raise funds as interest rates rose from 8 per cent in 2006-07 to the present 13-14 per cent, many projects have fallen behind schedule. In the case of new projects, questions are being raised about their viability unlike a few years back when there was optimism about a quantum jump in highway traffic.

"Unless the stimulus package ensures that the interest rate remains consistent for the next two to three years, it won't attract bidders, who are cautious," says M. Murali, director general, National Highways Builders Federation. But the faultlines run deeper. Many closely associated with the highway sector point out that the programme had started going off track from mid-2006. Is it fair then to blame only the global slowdown for all of the sector's woes? It's a classic case of too much bureaucratic and political micro-management derailing matters.

On the political front, T.R. Baalu's hamhanded attempts to oversee NHAI's day-to-day functioning saw a change of three chairmen in two years. In one case, the minister changed his mind about the chairman's ability after just two months. Questions were raised about NHAI's functioning and a restructuring was ordered. Expectedly, many investors got put off. As Vinayak Chatterjee of infrastructure consultancy Feedback Ventures puts it, "The industry continued to express anguish and unhappiness at the political leadership of the ministry."

Alongside Baalu, bureaucrats in the transport ministry and the Planning Commission are also being blamed for creating irritants in the system of awarding contracts, including in the model concession agreement for PPP projects. The outcome is self-evident: attempts to push over Rs 50,000 crore worth of projects in 2007-08 met with failure, unlike in the previous two years when companies had started offering 'negative grant' or anticipated revenue to the government ahead of even starting a road project. Similarly in 2008-09, hardly 15 of the 60 projects earmarked could be awarded to contractors. Many of these projects are now being given out on annuity basis, under which the contractor gets a fixed return on investment for up to 12 to 15 years without any risk on investment. 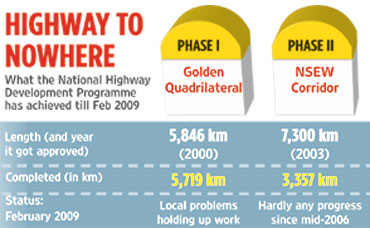 Besides the persistent problem of land acquisition, a major hurdle has been the government's stringent criteria in recent years for domestic companies, leading to their tying up with foreign companies just in name. "As foreign players share none of the work commitment, there is no technical or financial support—leading to major delays," former NHAI chairman Santosh Nautiyal points out. NHAI is also finding it difficult to get enough technical expertise on board, leading to outsourcing—one of the major reasons for slippage in quality.

This situation is in sharp contrast to what prevailed when the NDA government launched its ambitious highway programme. The 5,846-km Golden Quadrilateral (GQ) project launched in 2000 saw over 95 per cent contracts being awarded within two years. Barring 127 km pending completion for so many years, GQ has definitely improved connectivity between the four major metros. Similarly, the North-South and East-West corridors (totalling 7,300 km, launched in 2003) saw 15 per cent of the contracts being awarded in the first year before the UPA government took over in 2004. Despite the change in government, over 85 per cent of the contracts had been awarded for this corridor by March 2006. Thereafter, there has been tardy progress in the award of contracts.

What went wrong? Road transport secretary Brahm Dutt blames it on the switch from direct government spending to the PPP mode to fund a more ambitious programme to link all towns with highways within 50 km. More importantly, Dutt admits, "In the earlier phases, the mode and investment decisions were left to NHAI." Observers, however, attribute the slowdown to the discord between the ministry and the Planning Commission, the latter being blamed for all the flaws that have crept into the system. The bone of contention is the model concession agreement introduced in 2006-end, clarifying funding norms and return on investments in PPP projects.

This has been tweaked many times. The man behind the change in thinking—Planning Commission advisor (infrastructure) Gajendra Haldea—feels only bankable projects on offer will get more takers. Unfortunately, "excessive over-engineering has led to high costs (from Rs 6 crore per km in 2006 to Rs 11 crore per km due to changed road specifications), which in turn make the projects unviable. Either these costs have to be rationalised or the user must be asked to pay a higher toll," says Haldea.

There are also differences over the functioning and role of NHAI, which is blamed for the rise in corruption and shoddy maintenance of roads. NHAI officials, however, cite too much bureaucratic interference and lack of adequate technical manpower for the decline in quality of work. Central Administrative Tribunal (CAT) vice-chairman and former road transport secretary L.K. Joshi feels NHAI is currently working with its hands tied. "Both the ministry and the Planning Commission have not stood behind the NHAI or given it autonomy. They have instead interfered in its work. It has been reduced to the status of an office of the ministry of transport," says Joshi.

While many are keen to grant NHAI more autonomy with accountability, it remains to be seen whether the government will play ball. In the interim, Dutt supports "the NHAI proposal for a change in policy to allow it freedom to choose the mode of project delivery depending on the viability of the project". There's too much at stake. The key to equitable socio-economic development lies in improving road connectivity, not just to ports and industrial hubs but also to the hinterland. That, needless to say, helps create more jobs.