Not An Inch In Jerusalem, And Yet... 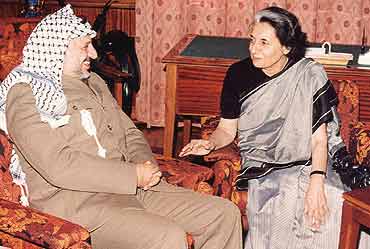 outlookindia.com
-0001-11-30T00:00:00+0553
I had met Yasser Arafat a few times when I was in the Prime Minister's Office of Indira Gandhi and Rajiv Gandhi. But it was during my 30 months of stay in Gaza as a United Nations Special Representative to the Occupied Palestinian Territory in the late '90s that I came to know him well. Though I was working for the UN, he frequently asked me about India and the Congress party with which he had had close ties for a long time. He had great affection for Indira Gandhi. He wanted to help India in various ways, including in its relations with Pakistan. Arafat was once reported to have conveyed his readiness to help Mrs Gandhi rally the Muslim vote for her in Indian elections, an offer she politely but firmly declined. Mrs Gandhi was extremely concerned at Arafat's plight during Israel's siege of Beirut in 1982-83, and had offered help through the International Red Cross. Arafat was looking forward to a visit by Sonia Gandhi in the Occupied Territory at his invitation. But the visit could not materialise due to scheduling problems.

The best time to meet Arafat was around midnight. He was at his freshest then. His wife, Suha, often complained that her little daughter never got to see her papa. For a head of state, Arafat lived in a very modest house in downtown Gaza. He had no interests outside his work. The ordinary Palestinians felt that Arafat, who married very late in life, should have remained single; they said Arafat's first and only true love was Palestine, but added, approvingly, that he had always been fond of 'healthy' women.

At the time of writing this piece, Arafat's condition seems precarious. His departure from the scene, through permanent incapacitation or death, will leave an immense vacuum in the body politic of Palestine and a huge void in the hearts of the Palestinian people. But the transition to the post-Arafat Palestinian institutions will largely be smooth. And it certainly will be non-violent. Mahmoud Abbas, better known as Abu Mazen, who has been the executive secretary of the central committee of the Palestine Liberation Organisation (PLO) for many years, will take over as its chairman. Ahmed Qurei, widely known as Abu Ala, will probably continue to remain the prime minister. Mohammed Dahlan, a former security chief, will also play an important and constructive role. Abu Ala and Abu Mazen, both moderate leaders, should be able to carry out their respective functions without much difficulty unless Israel expresses too much joy at seeing them succeed Arafat to these positions.

Yet their task will be far from easy, unable as they will be to wield the clout Arafat did. They will only be too well aware of their limitations but, mature politicians as they are, they should manage to work together. If Israel will allow that to happen, the Palestinians will hold elections in a few months and democratically elect their leadership. After all, Arafat was one of the very few genuinely democratically elected leaders in the Arab world. In fact, the Palestinians are the most secular and democratically inclined Arab people whom, alas, the Israelis managed to radicalise in the past few years.

As the Hindus say, every person is born for a specific purpose. Once the mission, however modest, has been dealt with, the person leaves the world. Perhaps Arafat had already accomplished what he was born to achieve, namely, make the cause of Palestinian independence a cause in itself and not a pawn in intra-Arab quarrels—which was how the Arab governments treated the problem for many years. He received a hero's welcome at the time he returned to Gaza in 1994, a year after the conclusion of the Oslo accords. While he remained the single most popular Palestinian leader, his popularity waned subsequently. The most important reason for the erosion of his popular appeal was his inability to deliver the promise of an independent Palestine with Jerusalem as its capital, and for the continuous siege in which Gaza and other occupied territories were held by Israel.

But there were other reasons as well. More than anything else, people complained about corruption in the upper echelons of the Palestinian Authority. Most of the revenues collected by PA was credited to the account of the finance ministry, but Arafat kept control over some of the money which, he said, he needed to help the victims of the freedom struggle. I was once approached by a member of the elite Force 17, tasked to ensure Arafat's security, for help for medical treatment in Cairo. I mentioned this to Arafat, who thanked me for bringing the matter to his attention and ordered the money to be given to the soldier. The treasury official handed over the money, but after duly collecting his own cut!

The younger generation was getting impatient with Arafat's style of functioning. While they all hated Israel, they envied its democracy even though Israel's own Arab population complained about being treated as second-class citizens. The Sharon government's persistent propaganda to marginalise Arafat contributed to feelings of disaffection. This produced two contradictory results. One section in his own Fatah party became frustrated with all negotiations with Israel and took to violent methods, forming the Qassam brigades and competing with the Hamas and Islamic Jihad groups in suicide bombings. The other section demanded transparency and democratic elections. The main difficulty in organising elections was the total destruction by Israel of all infrastructure in occupied territories, rendering the conduct of elections almost an impossible task.

The collective leadership that will replace Arafat would be anxious first to establish their legitimacy and then resume negotiations with Israel. Israeli Prime Minister Ariel Sharon is determined to get Israel out of Gaza primarily to cut losses. Whatever his motives, evacuation of a part of the occupied territory can be regarded only as a positive development by the Palestinians. The international community, including India, welcomes the withdrawal, provided it is the first step in eventual, total evacuation from all occupied land. Sharon has been honest in expressing the rationale behind the Gaza disengagement plan. According to his calculation, the withdrawal from Gaza will be the first and last withdrawal from occupied territories. The peace process would then be frozen. It has been a master stroke of Sharon's. A man who was responsible for the massacre of hundreds of Palestinian refugees in the camps of Sabra and Shatilla is now being projected as a moderate in view of the strong anti-Gaza withdrawal protests orchestrated by his own Likud party.

If Israel plays its cards properly—which means not playing any at all—a collective leadership, consisting of representatives of the principal political persuasions, is likely to emerge. It could include Hamas and Islamic Jihad in some form. These extremist movements have a substantial following, not so much for their terrorist activities as for their charitable work, especially in the Gaza Strip where more than 50 per cent of the population is unemployed. If and when negotiations between the two sides resume, it should surprise no one if Arafat's absence is felt by one or the other side. Even Israel would realise there would be no one of Arafat's stature and influence to take tough, unpopular decisions. Israel's propaganda notwithstanding, Arafat was a realist and had become a moderate in his later years. Oslo and other subsequent agreements, like Israel's peace treaty with Jordan, would have been impossible but for Arafat's pragmatism.

As and when Arafat is declared dead, India would certainly want to send a high-level delegation to his funeral. He was the head of a state which India, along with more than 100 other countries, recognises. The venue of his burial itself is a thorny issue. Arafat had expressed his desire to be buried in Jerusalem but Israel seems determined not to allow that. At the time of writing, Palestine leaders have reportedly decided to bury Arafat at his sandbagged West Bank headquarters in Ramallah and turn into a shrine. It is, however, possible that the ceremonial part of the funeral might take place in Jordan or Egypt where Arafat first started his armed struggle against Israel 40 years ago.

An era would come to an end with Arafat. Thomas Friedman is wrong when he writes in The New York Times that "Arafat's historical impact will be as lasting as a footprint on sand."

(The author was India's Ambassador and Under-Secretary General in the UN from 1986-99 and Special Representative to the Occupied Palestinian Territory between 1997 and 1999.)