Not A Love Story

It does, seemingly, have a real story to tell and a pertinent point to make but in the end is an opportunity lost 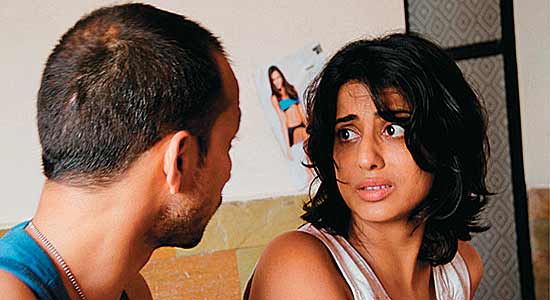 Not A Love Story, like most recent RGV films, is all about odd camera angles. Inspired straight from the murder of Mumbai TV producer Neeraj Grover, for which Kannada actress Maria Susairaj’s boyfriend Emile Jerome Mathew was convicted, it does, seemingly, have a real story to tell and a pertinent point to make. The film is about how ambition, possessiveness and jealousy can draw human beings toward perversity. But the main theme takes a backseat as the camera slides over the bodies and between the legs of the characters, turning NALS into cinema of titillation in which the filmmaker as well as viewer become voyeurs. Mahie Gill is the small-town girl who wants to strike it big in tinseltown. She has an obsessive boyfriend in Deepak Dobriyal, who discovers a lover (Ajay Gehi) in her apartment and kills him in a fit of rage. The murder is played out in a terse, clinical way and the background score gets too noisy and irritating, as does the constant referencing to Rangeela. Gill, who has a nice earthy appeal, looks uncomfortable playing hip and Dobriyal, who otherwise acts wonderfully with his eyes, also goes a little too over the top for comfort. NALS is an opportunity lost.