That final leap of faith: dropping out, tuning in with India 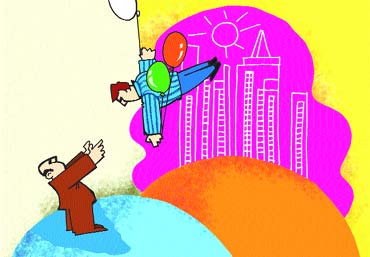 "Swati called me early, 7 am. We talked, as we do on Saturday mornings, of our life: where we are headed, what our priorities are...and in the talking, we make sense of this confusing, whirling rollercoaster of a world....

Now I am alone, staring at these objects scattered around me: bed, dresser, lamp, photographs, the open doorway, the carpet, the wall hanging. And they make no sense to me. WHAT AM I DOING HERE? Everything is meaningless: getting up, brushing, eating breakfast, stepping out. We have got to act for today, not for when we retire. Is it as simple a switch as this? What are we afraid of?"

We had met our financial and professional goals, and were respected in our fields of work. Swati was working with one of the largest architecture and design firms in the world. I was on a fast-track career, and loved my job. At 33, I was heading a $100 million business spread across Europe.

Earlier, during our life in the US, the regular NRI gatherings would have the usual conversations about what ailed India. And we had all the ‘answers’. "The problem with India is...", was how most sentences would begin. Magic wands being swished around, thousands of miles away, safe. On our visits to India, we would grumble about the airports and the garbage and the traffic. Yes, we enjoyed the family company and the smells of India, but it was a relief to get back to the calm and peace of our cocooned lives.

Pretty soon though, these pontifications had started feeling stale. One particular experience was telling. We had just moved home to a new town in Connecticut, sometime in the early ’90s. There was a flyer in the mailbox— "Cleaning the park this Saturday, come in your junk clothes. Beer after." The mailbox would invariably be stuffed with messages like this, which we would promptly trash. Who had the time, and weren’t these the responsibility of the government anyway? But we had just moved in, and wanted to meet the neighbours.

So, for purely selfish reasons, we went. There was a group leader who gave out instructions, pitchforks and gunny bags. We worked cheerfully till noon, and had the promised beer after. Interesting experience, nothing extraordinary though.

Until Monday morning, when I reached the station to take the 6.35 commuter train to Manhattan. And saw, standing there in a suit, reading the Wall Street Journal, the group leader of our park clean-up operation. We talked. Turned out he was a banker like me. Just another regular citizen, not a tree-hugger or NGO leader. His volunteering for the local community was something he had created time for, and took very seriously. He told me that there were others like him—on the school board, on the city budget committee, and so on. These acts of local engagement were related to the larger complicated ideas of democracy and government. I thought about my life in India—in all the years there, I had not lifted a finger to volunteer for anything. Not that I didn’t want to, just that I didn’t think it was expected of me.

Swati and I realised that—like most middle-class Indians—we knew very little about democracy and politics and government, besides the convenient cardboard caricatures we carried around with us. Democracy in India was like cricket—a spectator sport. We began to glimpse the massive shift required in our minds to make democracy truly work in India. We felt the gnawing urge to learn about all this, to return to India and actually make a difference.

Most decisions in life are driven by more than one reason. And reason alone is not enough—the actual decision, that final leap-of-faith, is ultimately all emotional energy.

On the personal front, we had all four of our parents in Bangalore, all—touch wood—in good health. And getting along reasonably well with each other, imagine that!

Swati and I were keen that our children got to know their grandparents. For her, because she had never met either of her grandfathers; they died before she was born. For me, because my relationship with my mother’s father had been very special to me.

When we mention the family issue to people, most of them nod, "Yes, in America, life is very selfish and money-minded" or, "Children need to have Indian values."

Neither of these statements is true for us. Our experiences in the US, both at university and work, broke many myths that we had held about that country. We have wonderful friendships with many Americans who care about their families and friends as much as, if not more than, most Indians we know. We saw civic conscience and hard work as an almost universal aspect of American life.

The question of Indian values is a tricky one. We loved life in the West, New York and London are even now among our favourite cities in the world. However, we are clear that our identity is Indian, while our worldview is more cosmopolitan. We wanted our children too to have a similar sense of identity and rooting. And we felt fortunate that they had the opportunity to build an inter-generational link with their grandparents.

The move to London was driven partly by career, but also because it brought us halfway home. A few months after the diary entry, one of our close friends who lived in Chicago stopped over on her way back from Delhi. She had terrible news: both her parents had been diagnosed with terminal cancer and given barely a few months to live. She was devastated. And yet, she was constrained because her husband—also a friend—had just started an MBA, and she needed her job for the paycheck, insurance, bills. She left on Friday.

Swati and I spent the weekend talking about their situation. We told ourselves, "What are we waiting for? There are never going to be any signposts saying ‘Important moment coming up, be prepared to turn’. We just have to make the leap." All the trappings—the benefits, the insurance, the business-class trips, the paid-for movers—felt like traps.

And so, on Monday morning, we quit. That’s what it came to, all the introspection and debate over the previous weeks and months. My bank made me feel good, they refused to accept the resignation, flew in someone from New York to dissuade me. "Whom are you joining, and how much are they paying you?" he asked. (It’s standard banking practice, jumping ship for fat bonuses.) I laughed, "No, I’m not leaving for another bank. I’m leaving for another life."

I finally left that Friday. I will never forget that evening, as I left our office at the Strand. It was late, I left by the side entrance, a London cabbie pulled up and the leaves swirled in a quiet ballet. "Late day at work?" he asked me as he pulled away.

"Nope, I just quit," I smiled at him in the rearview mirror, and watched his mouth drop. I felt like a thousand balloons had been tied to me.

Ramanathan is founder/coordinator of Janagraha, a Bangalore-based organisation involved in civic issues

Ah, It All Comes Out Right In The End