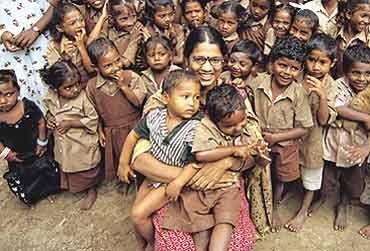 While the tsunami stimulated the charity hormones of many, few made it a long-term cause. Few dropped anchor. One of those who did was Revathi Radhakrishnan. The filmmaker, journalist and activist landed in Nagapattinam as a volunteer and worked ten days. On January 7, ’05, she had a chance encounter with Malliga and her baby Lakshmi at the local bus-stand. The mother was begging and the child was sick. Revathi wondered why someone was begging when food and relief was in excess of requirements. Malliga was an Aadiyan, an itinerant community, which considers begging and selling plastic wares as its kulathozhil (caste occupation). Malliga led Revathi to the larger Aadiyan group of 43 families who were all huddled in a park since no official relief camp gave them room.

Seven years ago, the Aadiyans had ‘settled’ in MGR Nagar along the sea. The tsunami had swallowed all their kuccha houses. Since their pre-tsunami life wasn’t fixed, the administration quickly decided that the Aadiyans were not ‘tsunami-affected’. Revathi also realised that only one in five of the community had been to school. By March, Revathi and a group of independent volunteers tried to put about 40 Aadiyan kids into local schools.

"Only seven kids with previous school experience were admitted. But they were abused and ridiculed. Other children made fun of their dry-brown hair...they were even made to sit separately. In such a hostile atmosphere, the children could hardly learn," says Revathi. The Aadiyans have ration cards and voting rights but no community certificate. The government refuses to classify them as a Scheduled Tribe; in fact, they refuse to classify them as anything. "Their inability to pursue education owes mainly to not having a community certificate and hence no reservation," reasons Revathi. "We are now lobbying to...