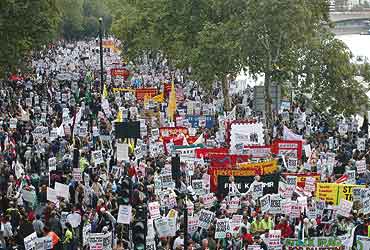 Prime Minister Tony Blair could not have been entirely pleased to hear Bill Clinton tell the Labour Party conference in Blackpool that Blair would be "central" to any decision over war on Iraq. It was another certificate of world statesmanship to Blair, this one delivered with the best of Clintonian charm. World statesman, yes, but not quite leader of all of Britain. Before Blair can hope to deliver Germany, France and Russia to action that would satisfy US President George W. Bush, he must deliver Britain.

Blair has looked a long way from doing that over recent days. The gung-ho echoes of Bush have faded in the face of rising opposition at home. "I know the worry over Iraq," Blair acknowledged at Blackpool. "They fear it's being done for the wrong motives. They fear us acting alone." Blair promised the UN route more firmly than ever before, though he left it open what it could be—or be made to be. But there is a new restraint in Blair's language and tone, largely forced on him by opposition from within his own party, and yes, by just plain people like you and me.

A thousand people a minute filed by 10 Downing Street for four hours and 40 minutes in the biggest anti-war rally London has ever seen. Not the kind of rally a leader can ignore, not even with Blair's majority and elections four years away. When more than a quarter of a million Brits gather to give up a sunny Saturday, another Brit certainly knows what that means.

The rally from the Embankment by the Thames to Hyde Park succeeded before it began. You had first a long march backwards just to join the rally. Those who joined around the middle waited two-and-a-half hours before they could begin marching; there were just too many people joining in the front. And many who joined the march were students and office workers with no clear political leanings. The spontaneity of the attendance...