No Tablet For Stone 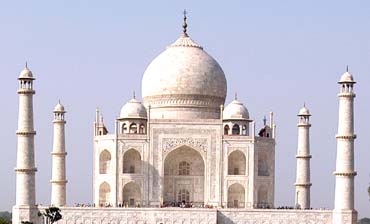 outlookindia.com
-0001-11-30T00:00:00+0553
The Taj has been under siege from man-made elements for a long time, and in the last two decades, various prescriptions have been suggested to save it from the ravages of industrial pollution. The latest, though, has flummoxed even our normally sedate historians and conservationists. The Archaeological Survey of India's (ASI) latest beauty tip for the 17th century monument and one of the 'seven wonders' of the world is to subject it to a mudpack treatment!

Last week, historian and Taj Mahal expert R. Nath lashed out against the plan to use fuller's earth or Multani mitti as mudpack for the monument. He told Outlook: "It's a bleaching agent comprising hydrated aluminum silicates that contain magnesium, sodium and calcium within their structures to absorb impurities like oils, fats, tallow and petroleum-based residues. But there is no history of its use on stones or marble surfaces anywhere else in the world, not even places like Greece and Italy. As a bleaching agent, it will make the surface of the Taj uneven and harm the marble, exposing it to dirt and fungus." He wonders why the ASI doesn't stick to the traditional conservation manual and says he will move a PIL if the proposal gets the go-ahead.

This is not the first time the mud pack has been tried on the Taj. Six years ago, the ASI had tried it and, initially, the Taj had got a shiny coat. But it soon began to yellow. Experts believe such short-term measures will eventually hasten the process of decay of the monument.

Instead, they point out that the ASI, as well as the Centre and state governments, must effectively address the real issues of pollution. If 10 years ago, the iron foundries, the glass and leather industry, marble mining and the Mathura Refinery were identified as the culprits, the famed monument now faces new threats. Take vehicular pollution. In 1985, there were only 40,000 vehicles in Agra. Today, the number has shot up to close to four lakh. In addition, three busy national highways criss-cross the city, adding to the pollution. Also chronic power shortage—on an average there is a power cut of at least 4-5 hours a day—has meant the widespread use of polluting generators running on diesel.

Factor in also the damage caused by mining to the 10,400 sq km Taj Trapezium (covering the districts of Agra, Mathura, Ferozabad and Bharatpur) that was demarcated by the Central Pollution Control Board as an ecologically sensitive zone, the rampant real estate development and the ever-shrinking Yamuna and the nightmare is complete. The green cover on the Braj hills which provide an ecological cover to the entire region is also fast disappearing. Around 18,000 acres of land have become barren, largely due to extensive mining for stone, according to a recent study done by IIT Rourkee. Says Raghav Mittal, a former IITian who is now part of the Braj Foundation which has undertaken extensive work in the area, "If the green cover on the hills disappears, the Taj too gets affected."

For the last two decades, environmentalists have been battling industry in an attempt to save the Taj. The Supreme Court, in 1993, had constituted a high-powered committee to study the various factors contributing to pollution in Agra. Specific recommendations were made by the committee but these were ignored. As for the original culprits, experts say there are reasons to believe that the Mathura Refinery (see box) wouldn't have undertaken corrective measures had not the Supreme Court made it binding on the PSU. Back in 1996, the SC had ordered that major industrial units around the area should either instal pollution control devices or shut down. According to Agra Iron Foundries Association president, Amar Mittal, as many as 100 iron foundries switched to the more expensive gas-based substitutes. "Nearly Rs 100 crore have been spent by the foundries to make the switch," says Mittal.

The Taj attracts two million tourists a year now. This number is only bound to increase after the frenzied smsing spree last month to vote for the seven wonders of the world (over 45 million around the world voted for the Taj). The Taj, justifiably, made the grade. But a big question mark hangs over what is being done to save the monument. The ASI's proposed mudpack solution is as cosmetic and myopic as things can get.