After Arcelor, will Tata Steel fall prey to NRI claws? 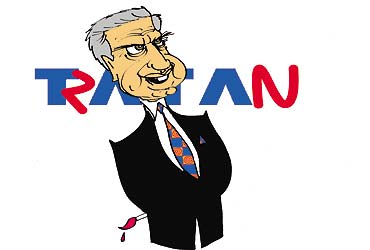 outlookindia.com
-0001-11-30T00:00:00+0553
With Caution The repercussions of the mega merger between two of the world’s largest steel companies were felt as far as India. Just a few days after the birth of Arcelor-Mittal this year, India’s largest private steelmaker, Tata Steel, too made an announcement. Tata Sons, the holding company for most of the Tata group firms, declared its intention to increase promoters’ stake in Tata Steel. Everyone was sure that the move was prompted by the emergence of a new predator on the global arena—the London-based NRI billionaire, L.N. Mittal, whose unending and cold aggression was responsible for the deal with the Luxembourg-based Arcelor.

Immediately, Tata Steel denied its decision was a pre-emptive one, forced by fears that it may be the next target for Mittal, who has been on the prowl in Asia. But observers were certain the House of Tatas was readying itself to protect its turf. "The steel business is an emotional one for the Tatas. The tenacity and persuasive powers that Mittal displayed in acquiring Arcelor would have set the cat among the pigeons everywhere. The Tatas too have realised that once Mittal Steel sets its sights on a specific takeover target, it’s impossible to hold it off," says a Mumbai- based investment banker.

At the Tata Steel annual general meeting this July, Ratan Tata, the group chairman, hinted as much. "From a promoter’s standpoint, the company (should) continue to be held by major shareholders who will act in the company’s interest," he told his shareholders. Just in case someone missed the big point, he added that raising the promoters’ stake in Tata group companies, including Tata Steel, was preferable to inviting strategic investors. As the Arcelor-Mittal deal had proved, even a powerful firm like Arcelor could be forced to join hands with a strategic investor. Although Arcelor opposed the hostile bid, the European firm had to ink an agreement with Mittal Steel after most of the former’s shareholders backed it.

To be sure, China and India will be the next focus areas for Mittal-Arcelor. This is reflected clearly in Mittal’s past record. Initially, he took over the smaller steel firms in East Europe, Latin America and the Carribean. In 2005, he took over International Steel Group, an agglomeration of ailing mills brought together by businessman Wilbur Ross. Thus, Mittal Steel became the world’s largest steel company.

After that came the Arcelor deal, which enabled Mittal to establish himself in two of the most developed regions—West Europe and America. But to become a truly global player, Mittal has to crack the Asian market. Reason: steel demand is galloping at a furious pace in Asia, while it’s coming down in the so-called developed markets. In 2005, the US witnessed a 15.4 per cent fall in steel consumption, and the fall in EU was 11.7 per cent. However, the growth was a massive 25.9 per cent in China and an impressive 7-8 per cent in India.

Mittal’s China card was revealed when he purchased a 36.7 per cent stake in the country’s eighth largest steelmaker, Valin Steel Tube & Wire Co in July 2005. He’s scouting for more opportunities. "Mittal’s first priority will be to strengthen his presence in China, which accounts for more than a fifth of the global demand. But domestic players know that India can’t be too far behind in his scheme of things," predicts Shahina Mukadam, head of research, IDBI.

India may well be Mittal’s Plan B, in case the China strategy falls through. For, even during the Valin deal, the steel tycoon realised that the Chinese regulators weren’t willing to hand over management control in its domestic firms to outsiders. Mittal’s plea for a 50 per cent stake was rejected and the original promoter, Valin Group, has a higher 37.7 per cent stake. But Mittal is always keen to get an upper hand. (Even in Arcelor-Mittal, where he doesn’t have the majority on the board, experts agree that a board-room coup is in the offing.) 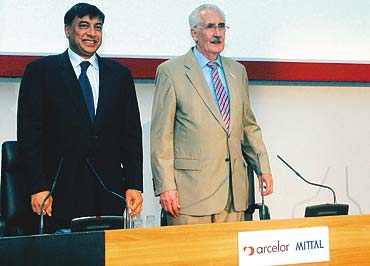 So, if China stalls his ambition, Mittal is likely to turn to India. Already, he has announced his plan to set up a 12 million tpa capacity plant with a proposed investment of Rs 40,000 crore in Jharkhand. However, the proposal has hit roadblocks with the new chief minister, Madhu Koda, saying he will revisit all MoUs (including Mittal’s) signed by the previous regime. Thus, the NRI may have little option but to pursue an acquisition-led strategy. With a production of five million tonnes a year and being the most cost-efficient manufacturer, Tata Steel seems an ideal target.

For any promoter, the best way to prevent possible predatory attempts is to increase his/her holdings. "The Tata group has generous cashflows, and Tata Sons is looking to shore up its stakes, not just in Tata Steel but other group firms to thwart possible hostile bids," explains Sandeep Nanda, head of research, Sharekhan, an online trading firm. At a recent Tata Tea shareholders’ meet in Calcutta, Ratan Tata reiterated the need to increase promoters’ holdings across group firms. He observed that promoters’ stakes in group firms was unusually low and needed a correction, and added that it should ideally be close to 51 per cent. (Currently, it’s 26.88 per cent in Tata Steel, 33.65 per cent in Tata Motor, and 28.45 per cent in Tata Chemicals.)

The efforts to increase Tata Sons’ stakes in family jewels can also be seen as part of Ratan Tata’s succession planning. He retires from his post as chairman of Tata Sons by end-2007, and Noel Tata, his half-brother, is widely tipped to be the next successor. But Noel is possibly in the same boat as Ratan was when he took over the group’s mantle in 1991. Like Ratan in 1991, Noel has little experience in business. While Ratan’s acumen was then limited to running an ailing Nelco, Noel runs a smallish retail firm, Trent, along with his wife, Simone.

Like in the case of Ratan in 1991, Noel faces huge challenges, albeit with a few minor differences. Ratan’s problem in 1991 were internal, and stemmed from the fact that the Tata group was dominated by powerful old guards—like Tata Steel’s Rusi Modi and Tata Chemicals’ Darbari Seth. Noel’s troubles will come from outsiders—tycoons like Mittal who’re waiting for a chance to gobble the Tata group companies. Ratan succeeded in getting rid of the old-time stalwarts, but only because he was backed by the late patriarch, J.R.D. Tata. If Noel has to keep the group intact, he too will need Ratan’s help.

Post retirement, Ratan can still be involved in the group’s affairs if Tata Sons manages to own nearly majority stakes in the various operational arms. In that case, he’ll continue to have a considerable say since the various Tata trusts own about 65 per cent of Tata Sons and Ratan will continue to control the trusts even after he gives up Tata Sons’ chairmanship. Only then will he be able to save, and expand the Tata empire.