Fortunately, two weeks later, it seems that the Indian economy will ride out the tsunami effect. A detailed assessment of what'll happen in two areas—tourism and marine exports.

outlookindia.com
-0001-11-30T00:00:00+0553
The weltering water walls that hit the coasts of several countries in South and Southeast Asia poured their sorrows onto an unsuspecting populace. Apart from spreading death and destruction, they shattered hopes, crushed dreams and dismembered optimism. The first instinct was to imagine a similar impact on several economies, including India’s. Fortunately, two weeks later, it seems that the Indian economy will ride out the tsunami effect.

Marine foods, which constitute nearly 3 per cent of India’s annual exports, may be hit marginally. Tourism and, hence, civil aviation, may continue to boom in case India is able to send the right messages to global travellers. And the cost of relief and reconstruction, predicts India’s FM P. Chidambaram, can easily be absorbed. (Although RBI governor Y.S.R. Reddy did admit "there’ll be some fiscal impact".) We present a detailed assessment of what’ll happen in two areas—tourism and marine exports. 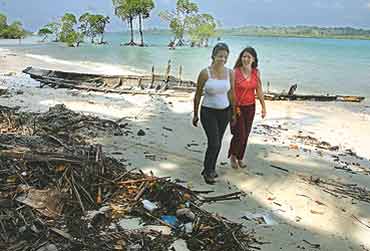 First, the bad news. Already, 20-40 per cent cancellations have taken place in the case of both foreign and domestic tourists. The fear factor, coupled with the emotion that one cannot party or holiday in a destination (however safe) which has witnessed massive destruction, is bound to hit the travel trade in the region. So, it seems the 2004 jackpot—when over 3 million tourists arrived in India—is over. Hotels and tour operators have also begun to water down their projections for 2005.

Still, the Indian tourism industry has a lot of resilience. It comes out when you speak to friends and tour operators based in the affected states. One Chennai-based friend reassuringly said that all was fine, and then mentioned that hotels in the beach town of Mahabalipuram, an hour’s drive from Chennai, had already started aggressive marketing themselves. Everyone associated with the sector is desperately asking people "not to spread panic" and that "it could have been worse". Don’t forget that not a single foreigner lost his or her life in India. And that too during peak season. This may sound a triviality considering that the local toll has crossed the 15,000 mark, but for an industry that bears the brunt of every disaster, it qualifies as good news.

On the positive side, besides the Andamans, which was just coming up as a popular destination, only the east coast has been affected. And this part was never the hot spot for coastal tourism. Explains Uttam Dave, ceo, InterGlobe Hotels, "The east coast has a total of just 200 to 300 rooms while on the west coast, Goa itself has several thousand." In addition, Kerala is no longer a predominantly beach destination. Most of its tourist spots like the backwaters of Alappuzha and upcountry areas like Munnar have not been affected by the tsunami. Subhash Goyal, chairman of Stic Travels, is quick to point out that the deputy chef de mission in the US embassy has just returned from Kerala’s backwaters without facing any problems. He adds that 400 charters were booked to arrive in Goa between October 2004 and March 2005 and not a single one has been cancelled.

Such issues, feels Amitabh Kant, joint secretary, ministry of tourism, need to be communicated on an urgent basis. "There is a lot of ignorance regarding the geography of the area. India is being clubbed together with other tsunami-affected countries. But, unlike Thailand and Indonesia, where tourist locations have been completely demolished, India is safe. This needs to be told to the world." The ministry is shooting e-mails and faxes to foreign tour operators as well as to its embassies telling them that the tsunami has mostly affected the fishing communities and that not one tourist has lost his or her life here. Kant says they have to aggressively promote India now, as the fallout of such a tragedy is normally seen a month later.

Another silver lining is that India does not rely heavily on coastal tourism; Rajasthan and the golden triangle (Delhi-Agra-Jaipur) contribute a lot to inbound tourism and, but of course, mainland sites have remained unaffected by the tidal waves. A few travel agents claim that groups scheduled to travel to worst-affected places like Colombo have been diverted to Goa and Kochi. But outbound travel from India is a different story. The most desirable destinations for nearly 80 per cent of outbound Indians are Thailand, Singapore and Malaysia—and all three have been hit by the tsunami. Operators feel they will now have to push alternative destinations like Turkey and Abu Dhabi.

Since the tsunami came towards the end of the calendar year, it hasn’t harmed the sector’s year-end financials. In 2004, tourist arrivals grew over 26 per cent compared to the previous year. Earnings grew by nearly 40 per cent during the same period. According to Ankur Bhatia, managing director of global reservation system Amadeus, domestic air travel grew 24 per cent while international air travel grew 18 per cent.So, if things go well, feel some optimists, tourist arrivals may cross the 4 million mark by March 2005. But then, the fact is that January-February, being peak season, contribute significantly to the financials of any year and given the mood and the cancellations so far, the good run of 2004 might not continue into the new year. The only hope: the industry is determined to fight the aftershocks.