It’s dense, self-indulgent but not unintelligent or thoughtless. Should have pitched this as subversive arthouse cinema, not a Bollywood film 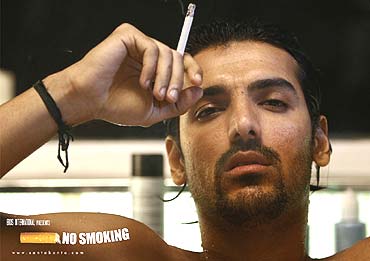 In No Smoking, the cigarette is a metaphor of free will and choice. The film is a trenchant critique of totalitarianism, repression and moral policing. It’s dense, self-indulgent but not unintelligent or thoughtless. Kashyap does not tell the story straight but grapples with provocative ideas, creates an alienating, claustrophobic world. Even the automated, deadpan characters are not ‘human’, more personifications. What happens when a cool but obnoxious smoker K (a perfectly cast John) gets into a rehab programme of Shri Shri Guru Ghantaal Baba Bengali Sealdahwale (Rawal)? Kashyap uses images to comment on fundamentalism: the Nazi concentration camps, the prisoned souls, the relentless surveillance of people, their chopped fingers, the eventual evaporation of compromised souls.

No Smoking is stylishly shot with great background tracks and quirky black humour. K asks his wife what she wants for the anniversary. Divorce, she says. "Itna budget nahin hai" comes K’s pat answer. The clever film references (the Bob Fosse cabaret, Ram Shyam look-alikes, the mix of Chaplin and Ektaa Kapoor) are fun but also detract. So do the in-jokes: Ranvir is called Abbas Tyrewala (Kashyap’s writer-director friend) with the line "Pakhi pakhi re (Ae Ajnabi)" in the background (Pakhi is the name of Abbas’s wife). The biggest failure: marketing strategy. If only they had pitched this as subversive arthouse cinema, not a Bollywood film complete with the sexy Bipasha-John promo number, Phoonk de!