If there's life outside the urban North jungle, Outlook missed it 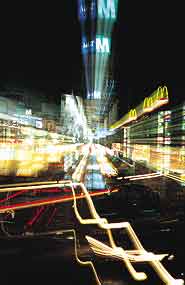 Someone who was at IT told me, when I asked her why they didn’t carry more stories on rural India, "India Today is not interested in anything without an urban angle, because its readers are in the cities."

I get heated up by talk like this, and it’s with difficulty that I keep from swearing in print. I spent the last decade in rural India —in Bihar, Kerala, Tamil Nadu and Karnataka—and it hasn’t been wasted time. One great insight I gained is there are not two Indias, urban and rural, but at least three: metropolis, small-town and village. ‘National’ magazines like Outlook cater solely to the first; they give denizens of the second a voyeuristic thrill; and they ignore the third.

Last month, I was on a Pune-Lonavla train and was talking to a smart young man in the "marriage function" business. I asked him what was growing in the fields outside. He said he didn’t know, without any shame. He had his eyes set on the big towns, he didn’t care what the local harvest was. Neither do the so-called national magazines. Their take on rural India is the same as the foreign media’s take on India as a whole: disaster news. Why is it that the South gets less space in Outlook? Because things are going on relatively well here. When there are starvation deaths, or tsunami strikes, or the Shankaracharya is arrested, Outlook gives it a cover. How long is it since there was a story on the tsunami victims’ rehabilitation? Is it not news because Tamil Nadu has been handling the rehabilitation competently?

Why are there so many Delhi Diaries, and few from Chennai or Bangalore? I’d go even further: Why not a Gooty, Gadag, or Gummidipundi Diary? These are interesting places, and what happens in them matters, even though the putative diarists may not have as much opportunity to drop names. I have been tempted to write a Coorg Diary and send it in, but my experience of national journals does not lead me to suppose it will even be acknowledged. If you’re not in Delhi or Mumbai, you have no business being in journalism.

Rural health policy is prescribed by city-based doctors, rural education policy by city-based babus and educationists. There are experienced and intelligent doctors and teachers who have spent whole lives in the villages. But the presumption is that if you work there, it’s because you have failed to make it in the city. And journals like Outlook go to the same city-based experts for wisdom even on a story with a rural angle. I guess it’s easier to get them on the phone.

My six-month-old car has been giving a lot of trouble, its engine "jerking and missing" constantly. The dealer in Mysore does not seem to know what the trouble is. Apparently, it’s over-designed. It meets "Euro-II emission norms", which is fine for Mumbai or Pune but takes no account of the market elsewhere being flooded with adulterated diesel. I e-mail the manufacturers about it and get no reply. Their toll-free number is not accessible from Coorg. Perhaps my e-mail perished en route. I once phoned my internet "provider" in Mysore, 100 km away, and they asked me, "Where is Coorg?"

Have we no right to exist? These are the same companies that buy space in magazines like Outlook to sell their wares. Outsourcing! Market forces! These mantras satisfy editorial—or increasingly advertorial—policy. "We can’t publish anything without an urban angle because the advertisers don’t like it." This is bunkum. There’s enough wealth in small-town and rural India. And do we all have to go the Times of India road, and sell our souls along with our space?

Sex surveys! The metrosexual male! The best colleges! How revealing can they be of national trends when the surveys and stories are confined to the metros? You’d think there was no sex in Gummidipundi. But there is, and there are even people who read Outlook there. Though I don’t know why.

So why do I read the blasted thing every week? For my sins, I took out a three-year subscription in 2003. The watch I was bribed with ran out of time some months ago, and so I hope will this animadvertorial policy.

(Nambisan wrote Bihar is in the Eyes of the Beholder)