No One's An Island 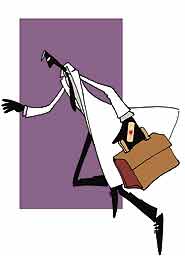 December 26, 2004: Indian navy doctor Commander Gopalan Parthasarathy was spending a relaxing weekend at home when the phone rang. It was 10.30 am and on the line was his breathless older brother informing him that a tsunami had lashed parts of Chennai. The conversation immediately brought Commander Parthasarathy to his feet. His hands turned clammy and he could barely speak. Then, he slowly enquired about the whereabouts of his mother and grandmother who lived on a beachfront property. There was no good news there either. His brother had not been able to contact them.

Seconds after concluding his conversation, Commander Parthasarathy turned on the TV set to catch the latest news. He then picked up the phone, silently praying he wouldn't have any problems contacting Chennai. After two hours of continuous dialling, he got through to his mother, who told him she was safe but his 82-year-old grandmother had been evacuated to an unknown destination. As the naval pathologist sat down to lunch, the phone rang again. This time the call was from naval officials at the hospital asking him to prepare immediately for deployment to Colombo.

This is what he had trained for and he felt duty-bound to help the people of Sri Lanka. By 2 pm, he had packed almost 750 kg of medication and, shortly thereafter, reached the airport with two paramedics who helped load his gear onto an Indian navy plane. At 7.30 the same evening, Parthasarathy and his team reached Colombo, heralding the world's largest ever relief operation.

The next morning, Parthasarathy was deployed with the Sri Lankan Army at Hambantota. Relief workers were finding it hard to cope with hundreds of bodies that had been deposited at the local hospital and morgue. Heavy rains in the area had further compounded their difficulties as it was now impossible to cremate the bodies.

Left with no choice, Parthasarathy prepared for mass burials. Bulldozers were pressed into action to dig huge pits near the beach. These graves were then lined with lime and bleach to slow down the decomposition of bodies so that they wouldn't contaminate the local water supply.

For the next few days, the Indian medical contingent teamed up with a group of Sri Lankan medical students who acted as their interpreters. They often travelled 250 km a day and worked long hours, but for Parthasarathy, the effort was certainly worth it: "There was a lot of appreciation for our work and people were very thankful."

"For example, there were some people in Hambantota. Most had lost their families but when they heard the army was pulling out bodies from the muddy and swampy waters, 40 of them volunteered to help pull out bodies, line them up and photograph them before they were buried. They didn't expect a single penny for what they did."

A lot of people from Colombo also drove down to help them. Among them were large batches of students who loaded vans with hundreds of coconuts and plied relief workers with sweet coconut water. "What I saw reinforced my belief in humanity. It taught me people are not bad and there is always a helping hand when we face these kinds of troubles."

Parthasarathy's experience also reinforced his faith in God. "Everywhere I went mosques and shrines were often the only structures standing. And it made me wonder why they were still intact when every other building around them had been destroyed. " He never felt guilty about leaving India, which itself had been ravaged by the tsunami: "I could trust that there would be somebody in India doing what I was doing in Sri Lanka. You have got to have that faith.

"That's what you've got to think. If my country can send people abroad, of course they can look after their own." Parthasarathy's spirit, his magnanimity and his selflessness were soon to become a shining example for millions across the world who showed unprecedented generosity in helping the people of Sri Lanka.

(The author is CNN's chief of bureau in New Delhi. Excerpted from Tsunami: 7 Hours That Shook the World, Harper Collins, 2005.)

When Angels Troop Down