No One Writes To The Prison Doc Anymore

A Jat playing bhadralok? Could it have been that he acted so well that we didn't even notice? 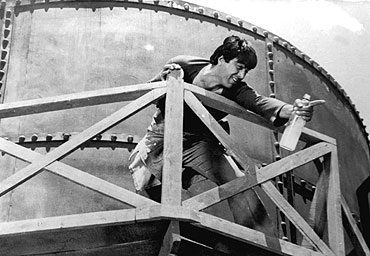 From Dil Bhi Tera, Hum Bhi Tere to Johnny Gaddar, Dharmendra acted in nearly two hundred and fifty films and never won a Filmfare Best Actor award despite being discovered in a Filmfare talent spotting competition. He won a consolation prize, a Lifetime Achievement award in 1997, but the magazine didn't give him one for an individual performance. This couldn't have been because he didn't star in successful films, or didn't turn in celebrated performances. Haqeeqat, Bandini, Phool aur Patthar, Satyakam, Chupke Chupke, Mera Gaon Mera Desh, Seeta aur Geeta and Sholay were outstandingly successful films, made by A-list directors and largely powered by Dharmendra's presence, but he never got the big prize. More interestingly, Dharmendra never got much credit for being an actor, when he was the most reliably good actor-hero in mainstream cinema from 1960 to 1975.

It's worth asking why. Some part of this lack of recognition had to do with the fact that Dharmendra acted in heroine-oriented films in the early part of his career. He was paired with major actresses like Nutan, Mala Sinha, Meena Kumari and Suchitra Sen who got the credit for the films they made together; Bandini, Anpadh, Phool aur Patthar and Mamta are good examples. He played the romantic foil and because he was so comfortable in his skin, so effortlessly the good-looking, honourable male lead, his audiences ended up thinking that his roles didn't require real performances. Then, in the early '70s, some of his signature performances came in multi-star films. In Chupke Chupke, while he carried the film, he shared screen time with Amitabh, Sharmila, Jaya Bhaduri and Om Prakash. Similarly his great comic turn in Sholay had to share attention with Sanjeev Kumar's eye-rolling histrionics, Bachchan's tragic end and, of course, with Amjad Khan's extraordinary debut as Gabbar Singh.

It's possible to find semi-plausible reasons, then, for Dharmendra being overlooked in the acting stakes, but these aren't good reasons. When you consider that Rajesh Khanna was celebrated for his performances in Anand and Namak Haraam, performances that are hard to watch today without giggling or cringing, when you think of the millions of movie-goers and critics who thought Sanjeev Kumar's kit bag of theatrical mannerisms made him Bombay cinema's greatest actor, when you recollect the endless variations on vigilantism that installed Bachchan in our memories as an acting Atlas, it's hard to believe that Dharmendra got so little credit for so much good work. Even Sunil Dutt, who was no one's idea of a great actor, got two Filmfare Best Actor awards in the early '60s. 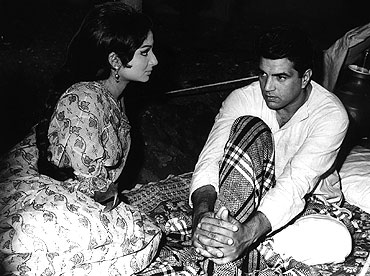 Essaying his best in Satyakam

The main reason why Dharmendra wasn't given his acting due was because he was good-looking in a conventional North Indian way. He was an early pioneer of male sex appeal in a cinematic tradition where the hero generally treated his body like an optional extra. It was the women that were sprayed into tight clothes: the men could be any shape they chose and generally were. Shammi Kapoor, Rajendra Kumar, Raj Kapoor in his middle period, Dev Anand and Rajesh Khanna kept their bodies all covered up and the world was a better place for it. Dharmendra was an early adopter of the bare-torsoed moment (Phool aur Patthar) and paradoxically, his rugged, clean-cut appeal worked against him as an actor.

The reason for this is that Hindi film critics tend to see actorly ability as a compensatory talent: thus histrionic ability is granted to actors who are either unconventionally attractive (Bachchan, Naseeruddin Shah) or positively plain (Sanjeev Kumar, Om Puri). Dharmendra, light-skinned, rugged, with the perfect Colgate smile, didn't fit the mould. Though no one would have mistaken him for Shashi Kapoor (who had desperately crooked teeth), they were both received as good-looking men who got by in films on account of an easy charm. So while Shashi was cute and Dharmendra was rugged, they were rated by their physical appeal rather than their ability to act. Which is a pity because while Shashi Kapoor genuinely couldn't act at all, Dharmendra was, for a dozen years, the outstanding actor-hero in Hindi cinema.

In the '60s, Dharmendra represented moral seriousness in Hindi cinema; in film after film, the characters he played tried to reconcile the conflicting demands of love, advancement and integrity. He specialised in playing the respectable professional. He was a jail doctor in Bandini, a barrister in Mamta, an engineer in Satyakam and Aadmi aur Insaan. In the mid- to late '60s, a time when Hindi cinema was marked by the hill-station hedonism of Shammi Kapoor, Dharmendra swam against the tide by carrying forward an older tradition of social realism and concern.

Bimal Roy had been the great master of that tradition; having acted in Bandini, it was fitting that Dharmendra joined forces with Hrishikesh Mukherjee (who had apprenticed as Bimal Roy's assistant director through the '50s) to make a series of middle-of-the-road films that wrestled with a particular dilemma: how was a man to lead an honourable life in a world made oppressive by traditional injustice and modern corruption?

The fascinating aspect of this phase of Dharmendra's career is that he became the vehicle for Bengali literary realism in Hindi cinema. Just as Guru Dutt's Sahib, Bibi aur Ghulam was a Bengali film in Hindustani drag, so too were Bandini, Anupama, Manjhli Didi and Satyakam. That a strapping Jat hunk managed to play the bhadralok protagonist with such intensity and conviction is an achievement for which Dharmendra gets too little credit. 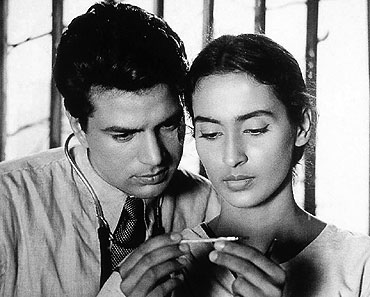 This part of his career peaked with Satyakam, made in 1969, the year Mrs Gandhi split the Congress and decisively inaugurated a post-Nehruvian era. Satyakam was Hrishikesh Mukherjee's best film and a landmark in the history of Hindi cinema. Dharmendra plays a civil engineer, Satyapriya, and it is arguably the most affecting and powerful performance by a male actor in that decade.

In Satyakam, the ideals of anti-colonial nationalism are lived by Satyapriya in everyday life, regardless of consequence. He marries Ranjana (Sharmila Tagore) who has been raped and made pregnant by a debauched prince and eventually destroys himself trying to reconcile his ideals with the dogmatic asceticism of his grandfather who had raised him and who refuses, till almost the very end, to accept his daughter-in-law's illegitimate son. Satyakam is at once the most rigorous examination of lived idealism in Hindi cinema and an elegy that mourns the death of republican innocence.

Satyakam is the necessary prelude to Zanjeer (1973), just as Dharmendra prefigures Amitabh. The great baton change in Indian cinema is not between Rajesh Khanna and Amitabh (Rajesh Khanna is a brief detour into the box-office potential of male whimsy and self-pity), it's between Dharmendra and Bachchan, between the self-sacrificing idealist who dies in the cause of a fairer, better world, and the disillusioned vigilante who visits vengeance on an irredeemably corrupt one.

The transitional phase between 1969 and 1973 was owned, in terms of stardom, by Rajesh Khanna, starting with Aradhana and ending with Namak Haraam. But Hrishikesh Mukherjee has a claim to being this period's pre-eminent director.

Between 1969 and 1973, Mukherjee sidelined Dharmendra to direct a series of successful films with the two main heroes of this time: Rajesh Khanna and Amitabh Bachchan, the reigning superstar and his successor. He made Anand, Bawarchi, Abhimaan and Namak Haraam. Looking for a firm foothold in the souffle cinema of the '60s, Mukherjee tried to slide past love stories and their tree-hugging conventions by making movies about all-male love. By framing Rajesh Khanna's awesome capacity for self-love in stories of male bonding with tragic resolutions (Anand, Namak Haraam), Mukherjee managed to transmute Khanna's narcissism into charm, his sickly appetite for suffering into twinkling endurance.

He tried to make Bachchan a Bengali hero as he had done with Dharmendra and it worked upto a point. Bachchan's babu moshai character in Anand was a critical and popular success. Three years later, when Mukherjee reprised the Khanna-Bachchan pairing in Namak Haraam, he moved away from the individual melodrama of Anand to a grittier social setting, industrial class conflict. The movie was a success but Bachchan's first outing as the Angry Young Man was just round the corner, and once Prakash Mehra's Zanjeer became a monster hit, the mainstream of Hindi cinema changed course, leaving Hrishikesh Mukherjee marooned in a low-budget tributary.

Dharmendra made an appearance in Mukherjee's Guddi, playing himself to the star-struck delight of the film's debutante, Jaya Bhaduri. Meanwhile, he held his own with a series of hits: Mera Gaon Mera Desh, Seeta aur Geeta and Yaadon ki Baraat. Then, ironically, he turned down the opportunity to make the film that sent Bachchan's career into orbit, Zanjeer.

As Prakash Mehra tells the story, Dharmendra had bought the script of Zanjeer from Salim-Javed. He gave it to Prakash Mehra to produce and agreed to play the main role. Then Dharmendra became busy producing a film to launch his brother's career, couldn't find the dates for Mehra and opted out of the film. The rest, as they say, is history.

1973 is a watershed in the history of the Hindi film for many reasons. It was the year the 'parallel' cinema was born, with the release of Ankur and Garam Hawa. It was the year of young love, flagged off by Bobby. But mainly it was the year that Salim-Javed, the authors of Bachchan's Angry Young Man persona, changed the nature of Hindi cinema for the next 20 years.

Like Mukherjee, Dharmendra was a casualty of this change. Not immediately: two of his best performances were still ahead of him. Hrishikesh Mukherjee gave him a comic opportunity in Chupke Chupke (1975), which he seized with both hands, playing with great brio a professor of botany, impersonating, for obscure reasons, a driver. It's hard to think of a role further removed from Satyapriya in Satyakam than that of Prof Parimal Tripathi, but Dharmendra had the range to carry both off with conviction.

Compared to Sholay, though, released in the same year, Chupke Chupke was a minnow. So it is Dharmendra's role as Veeru, Jai's (Bachchan's) buddy and Basanti's (Hema Malini's) lover, that we should consider his swan song. He was cast by Ramesh Sippy who had scored a hit with him and Hema Malini in Seeta aur Geeta. It was a remarkable performance: comic, romantic, fraternal, tough. Watching it today is a bit poignant because Dharmendra was never to star in anything worthwhile again. Though he continued to work as a hero till the end of the century, developing a tough new Garam Dharam persona along the way, the films he made were consistently appalling and by the time he went into semi-retirement in 2000, he was a B-grade movie star. It's one of the many ironies of his career that he did his worst work when he reverted to his roots and began playing the Jat hero, fighting feudal Thakur oppression in films like Ghulami, Yateem, Batwara and Kshatriya.

There are three styles for playing the hero in republican Hindi cinema: idealism, hedonism and cynicism. Historically, they don't succeed each other in perfect sequence, though one or the other style dominates particular periods. The dominant mode through the '50s and early '60s is idealism. Roughly around 1964, with Shammi Kapoor and his cohort, hedonism takes over. Dharmendra keeps the idealist tendency going till the end of the '60s, and after the feverish Rajesh Khanna interlude, cynicism sails in, with Bachchan in the van. If a Martian had been asked to cast the principled idealist and the two-fisted vigilante, there's no question that he'd have chosen Harivansh Rai Bachchan's tall, intense son as the former and the splendidly built Jat as the latter. It is a tribute to the Hindi film's inexhaustible ability to surprise that in real life, it happened the other way round.

(Mukul Kesavan's most recent book is The Ugliness of the Indian Male and Other Propositions, Black Kite, 2008.)