Tired of paying arbitrary 'tax' to extortionist ultras, the Naga public gives them a taste of their own medicine 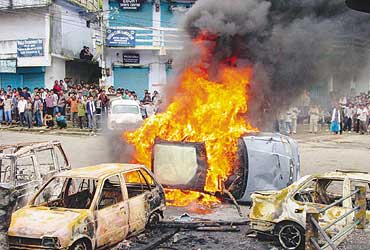 Last fortnight, Ao Senden, the apex body of the Ao tribe, which dominates Nagaland's Mokokchung district, passed a resolution in which it declared that nobody would pay 'tax' to any militant outfit. At least, not until the militant leadership arrived at an understanding with the people.

This move came in response to the violence triggered off by militants in Mokokchung town. Mob fury erupted on August 24 after two members of the Khaplang faction of the National Socialist Council of Nagaland (NSCN-K) fired in the air, ostensibly to celebrate the death of a member of the rival Isak-Muivah group. An angry crowd collected and the militants fired upon it, killing a school student. Incensed, the irate residents lynched the two militants, one a regional leader of the NSCN-K.