No Magic In These Wands

The cuts of the past seem to have bled deep. A rudderless Congress and its leaders hardly look the part for the big battles of 2009. 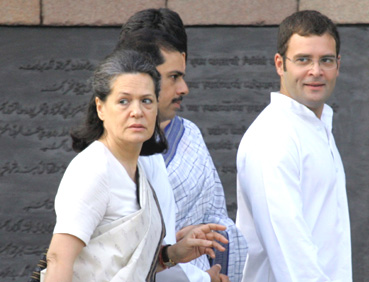 "Rehne ko ghar nahin/Saara jahan hamara hai (We don't have a house to live in, but the entire world is ours)."
—a Congress leader summing up the party's current predicament

Over the years, Congressmen have relied almost entirely on the charisma and drawing power of its leadership, particularly the Gandhis, to win elections. And, in 2004, when the Congress—with just eight seats more than the BJP— returned to power at the head of the UPA coalition, it seemed as though the Gandhi magic still worked. Now through Sonia Gandhi.

Cut to 2008 and with less than a year-and-a-half to go for the next general elections, there are serious doubts being raised, questions being asked: is the magic still there? The party's reliance on Sonia and Rahul Gandhi—almost to the exclusion of all else—failed it in Gujarat, just as it failed it in UP last year. And since 2004, in state elections, the party has only succeeded in wresting Haryana (2005) and Andhra Pradesh (2004) from the opposition while also retaining Assam (2006). In Orissa (2004), West Bengal (2006) and Gujarat (2007), the party failed to dislodge incumbent governments, and it lost Punjab and Himachal Pradesh (both in 2007). Clearly, a very ordinary record. Indeed, at a party conference in November '07, Sonia warned partymen that neither she nor Rahul had a "jaadu ki chhadi".

But if the supreme leader has a clear idea of the limitations of Dynasty, it is only beginning to dawn gradually on her party colleagues. As senior party leader Salman Khursheed explained to Outlook, "We need the Nehru-Gandhis to be in sustained leadership of the Congress, because they represent a pan-Indian vision and ideal, they act as a unifying force. That is a necessity, but it is not enough." Or as a central minister put it: "There is no question...we need the anchor of the dynasty. But how do we administer the party?"

Indeed, the over-dependence on the dynasty from the later years of Indira Gandhi has resulted in the party withering from within, even as the political map of India has been redrawn. The Congress' pan-Indian vision and its belief that it is—as one party leader phrased it—"a world unto itself" has been challenged by a mix of regional, caste and communal politics. From being an umbrella party, which represented all sections of society and all regions of the country, it now represents no one.

The Congress today, as conversations with a cross-section of its leaders reveals, neither knows how to set its house in order vis-a-vis the party organisation nor does it know how to respond to the challenge to its fading hegemony from regional, caste and communal politics.

Echoing the sentiments of many Congressmen, party spokesperson Shakeel Ahmed may say, "The Congress can never compromise on its basic principles, its belief in inclusive growth and peaceful coexistence of all communities. We have to carry all sections of society and cannot adopt a sectarian approach even if that means losing a few elections. This is a transitional phase; in the end people will realise that our way is right and return to us. There can be no short-cuts to success." Brave words but they offer few solutions.

In the last two decades, the party has tried many shortcuts, but with little success. For instance, in its effort to take on the BJP's Hindutva agenda, its own identity as a truly secular party has taken a knock on many occasions, unable as the party is to take an uncompromising stand for fear of losing Hindu votes. Simultaneously, there is a growing tendency to accept into the party fold disgruntled leaders from parties whose identity is the true opposite of the Congress—like the Shiv Sena's Narayan Rane in Maharashtra, or the BJP's Shankersinh Vaghela and more recently, that party's rebels in Gujarat—rather than working towards attracting new social groups.

Indeed, the problem today is that party strategists have not just failed to draw up a roadmap on how to deal with the new political challenges, it is also organisationally hollow from within. Strangely, in an era of personality politics, it has been unable to produce any leaders of its own who can take on the growing crop of aggressive regional leaders in other parties. 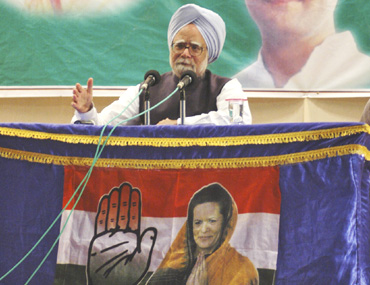 In fact, what was a murmur earlier is becoming a groundswell now: an increasing number of Congressmen are beginning to say that a system—such as the one that exists in the party today—actively discourages the grooming of new leaders, both because they could be a challenge to the dynasty but, more importantly, because they would diminish the clout of the cabal surrounding Sonia.

A Congress functionary says, "The main crisis in the party is that the internal democratic process, which used to throw up leaders, no longer exists. The state units are weakened beyond recognition. The centralised functioning of the party and the nomination culture have circumvented the democratic process. Whoever goes as the nominee of Delhi to the states naturally attracts animosity." Unfortunately for the Congress, though this is well-known, partymen are chary of pushing this line. A key central minister told Outlook: "It would be desirable if members of all party committees—from the block committee to the Congress Working Committee—were elected as it'll strengthen the party. The flip side is: this could increase the clout of the moneybags and demagogues. And will it lead to fragmentation of the party? To stop fragmentation, Mrs Gandhi has to assert her authority, but this means our state units are comatose. How does one strike a balance between a strong central leader and strong state units? That is the challenge."

Of course, there are some Congressmen who believe the party first needs to sort out its identity before strengthening the party organisation. "A big idea must precede organisation," says Khursheed. He points out that Indira Gandhi wasn't just a charismatic member of the Nehru-Gandhi family—she also pushed a political point of view, socialism, not welcome to the establishment at the time but she earned her spurs. Rajiv Gandhi, on his part, held out the promise of a new India—the "idea of digital India". In 2004, Sonia Gandhi introduced the idea of coalition politics or "consensus building"—something the Congress had shied away from—and won that election. In the last three years, she has spoken of growth with social justice, not merely as a slogan, he points out, but as concrete policy. "Unfortunately, the Congress has failed to encash that politically, so far," Khursheed says.

If that is the macro picture, a closer look at some key states is equally discouraging: in Uttar Pradesh, the Congress won only nine Lok Sabha seats of the 80 in the state in 2004; and 22 assembly seats in 2007. The party has sent a new PCC chief, Rita Joshi, to UP but it still looks like a Bahujan Samaj Party versus Samajwadi Party contest. In Bihar, last time the party won just three of the state's 40 seats and now with its ally, the RJD, also in decline, the Congress is still grappling with the question: should it go it alone in 2009? In Maharashtra, once a party citadel, it is currently dependent on partner NCP, its state unit riven and efforts even now on to try and replace CM Vilasrao Deshmukh with Union power minister Sushilkumar Shinde.

In Gujarat, the question is: after the recent washout in the state polls, can it hope to replicate its 2004 result when it won 12 of the state's 26 seats? In Karnataka, the party won eight of the state's 28 seats last time but the BJP is a growing force in the coastal belt. There's a state election this year, one whose results will impact next year's general polls. In Andhra Pradesh, the party won a whopping 29 out of 42 seats last time, but with anti-incumbency growing and a resurgent TDP on its way up and the Chiranjeevi wild card, not to mention the fact that state and general elections will be held together, the Congress can only lose seats.

There are clearly no easy answers. It's no longer enough to rely on Dynasty or the Lasting Idea—that of a Congress that goes back to Mahatma Gandhi. The time has also come for new ideas to address the challenges the party faces each day. As senior party leader Devendra Dwivedi puts it: "For the Congress to play its systemic role, it has to again become a transmission belt between the people of this country and the institutions of democracy." But how does one achieve that? That is the real challenge.