No Jokes On The Palm Leaf

For long Aiyar has promised to make this place a Dubai. Now, he blames brain drain. 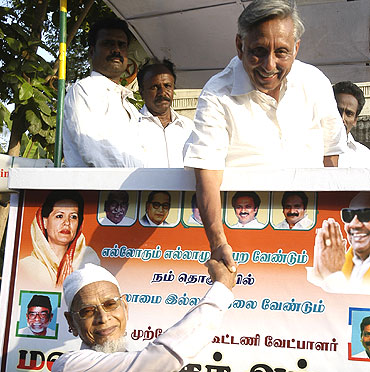 outlookindia.com
-0001-11-30T00:00:00+0553
Back in Delhi, I am told, Mani Shankar Aiyar is famous for his witty ripostes, sharp one-liners and punch lines that have audiences in splits. So I set out for Mayiladuthurai expecting to be vastly entertained. Only to find that in his constituency, the venerable Congress candidate cuts a very different figure. The starched white kurta-pyjama that the cabinet minister wears in Delhi has been replaced by the local garb of dhoti and shirt. And it's been a long time since Aiyar made a joke here, at least in public. That last joke was in 2003, when Jayalalitha, on the advice of her astrologers, gifted an elephant to the Guruvayur temple in Kerala. Aiyar found the image this conjured up irresistible. He remarked, no doubt in an allusion to Puratchi Thalaivi's elephantine proportions, that she could just as well have gifted herself to the temple. Alas, the queen was not amused, nor were her loyal supporters. Just a few days later, Aiyar was waylaid and attacked by AIADMK men near Nagapattinam, slippers were thrown at him in his own constituency, and his office ransacked.

That incident taught him a salutary lesson about the perils of shooting his mouth off. But another reason why Aiyar is uncharacteristically solemn and sober in his speeches in Mayiladuthurai is, quite simply, that his Tamil isn't fluent enough for him to pun or play on words. In fact, for locals, Aiyar's Tamil is itself something of a joke—they describe it as a bizarre mix of Brahmin Tamil and the halting Tamil spoken by foreigners. "It reminds us of Subramanian Swami," people in Mayiladuthurai tell me. "He's another one who speaks this kind of strange Tamil." Another thing the locals find strange is that Aiyar affixes his caste to his name. "Which politician does that in Tamil Nadu, especially if you have a Brahmin surname!" they say incredulously.

Mani Shankar Aiyar's mantra, ever since he first contested from Mayiladuthurai in 1991, has been: "I shall make Mayiladuthurai the Dubai of India!" Some may wonder why on earth Mayiladuthurai, a bastion of Tamil culture, would ever want to be Dubai. In this constituency stands the magnificent 12th century Chola temple of Darasuram in Kumbakonam. Here, too, is the ancient port city of Poompuhar, home of Kovalan and Kannagi, the protagonists of the great Tamil epic Silappadikaram. M.V. Pillai, author of the first Tamil novel, Prathaba Mudaliyar Chariththiram, written in 1857, hailed from here—he was the village munsif. Literacy and education levels have been high here for a long time.

No, Aiyar hasn't quite brought glittering Dubai-style shopping malls to Mayiladuthurai. But there's no denying that he has brought development to his constituency. The roads here are of a smoothness to rival Hema Malini's cheeks. The villages look prosperous and clean, with drinking water, electricity, toilets, community centres, even well-tended graveyards. I get a shock when I enter the toilet at the city bus stop. "I have to pay Rs 2 to take a leak here?" I ask incredulously. The man at the toilet door apologises: "I feel horrible having to do this." Must be a Dubai custom, imported to Mayiladuthurai.

Among Aiyar's other gifts to Mayiladuthurai are a gas plant, a thermal power plant, and yet another power plant fuelled by sugarcane waste. There's also an impressive Rs 20-crore stadium, better than any in Chennai, much used by local students. But there aren't enough employment opportunities for the local population. Many go abroad to seek their fortunes. "This brain drain is one of the reasons why this place hasn't yet become Dubai," Aiyar tells me, looking rather dejected. His characteristic ebullience is definitely missing. And with reason.

His opponent, O.S. Manian of the AIADMK, is a well-networked local man, who people say participates closely in their daily lives and problems. Manian emphatically points out that when more than 90 children died in a fire in a Kumbakonam school, he was right there to help and console, whereas Aiyar was unable to reach immediately. "When we local people approach Aiyar with a problem, he pushes us away, saying such local matters don't come under an MP's purview," complains Manikandan, who runs a small stall at the Mayiladuthurai town bus stop. Many others echo similar views.

But what seems to have made this election battle a really uphill one for Aiyar is the wave of public sentiment against Karunanidhi, whose DMK is the Congress party's alliance partner in Tamil Nadu. Karunanidhi's five-hour after-breakfast to pre-lunch "fast", with his first wife sitting at his feet and the second wife at his head—a scene aired repeatedly on Sun TV and Kalaignar TV—has earned him widespread ridicule. Aiyar has also been hit by the Congress's own stand on the Tamil Eelam issue—it is seen to be looking the other way while thousands of Eelam Tamils face death and disaster. After Rajiv Gandhi's assassination by the LTTE, local Tamils had distanced themselves from the Eelam cause. But that was 19 years ago, and now it's again an emotive issue for them. "So many Tamils are being killed in Eelam—what's Aiyar doing about that?" a municipal sweeper asks me heatedly.

Jayalalitha, meanwhile, has done an about-turn. "Support our alliance and I shall fight for a separate Eelam till my death" is her new trumpet call. Her election rallies show her at her histrionic best. Referring to the DMK taunt that she knows nothing about children or family, she turns to the crowd, arms stretched out, and pleads, "Aren't you my family? Aren't you my children?" The crowd roars back, "Yes! Yes!"

A popular AIADMK slogan in Mayiladuthurai these days mockingly asks: "arukku naadi paarkalaamaahat do the palm leaves say about Aiyar?)" The palm leaves refer to Mayiladuthurai's famous Vaitheeswaran Kovil, famous for its centuries-old palm leaves with astrological predictions written on them. You go there, give your name, and you will be shown a palm leaf on which your destiny is written. Even if your name is Obama, I'm told, you will find your palm leaf.

As I wait near a bus stop, baking in the sun, while the photographer goes in search of the shots he wants, three women approach me. They're middle-aged, heavily caked with powder and paint. "You want to come?" they ask. "Forget about my coming," I answer, "what do you think of the coming election?" "First attend to us, then we'll tell you about the election," they laugh. Unfortunately, just then, the photographer comes back and hurries me off to our meeting with Mani Shankar Aiyar.

"Write this in bold letters," Aiyar instructs me, as his parting shot: "Dubai is collapsing, but Mayiladuthurai is growing rapidly." I do not ask him if he has consulted the palm leaves.

(Charu Nivedita is a Tamil writer known for his irreverent, postmodern style. His bestselling novel Zero Degree, has been translated into English.)

Will It Rain Qorma?