National No Honour In Death

No Honour In Death

Pandya's family is angry, but the party forces it to keep mum 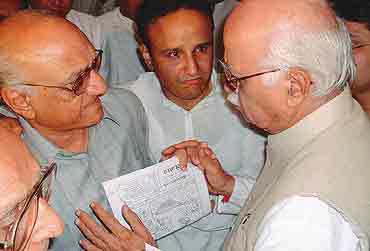 At the condolence meeting on April 7, Haren Pandya's family was extremely vocal. In the presence of deputy PM L.K. Advani, Pandya's father alleged that his son's murder was "politically motivated". He asked Advani why the BJP high command had handed over Gujarat to a Ravana.

Now, Vithalbhai Pandya and his family have suddenly chosen to be silent. They have been avoiding the press. Their outburst seems to have set the alarm bells ringing in the BJP. Clearly, there is pressure on the family. Jagruti, Pandya's widow, told Outlook: "We've said enough. Kindly excuse us."

Sources say it was the top brass that signalled, soon after Vitthalbhai's public outburst, that the party was not to be embarrassed. "A senior BJP leader from Gujarat was asked to get in touch with the family and assure them that justice will be done," says a party insider. It was also communicated that the family should not air their grief and grievances to the media.

What has really angered the family is the injustice meted out to them even after Pandya's death. Keshubhai referred to this...