How will the recent spate of attacks on African nationals affect ties with the continent? 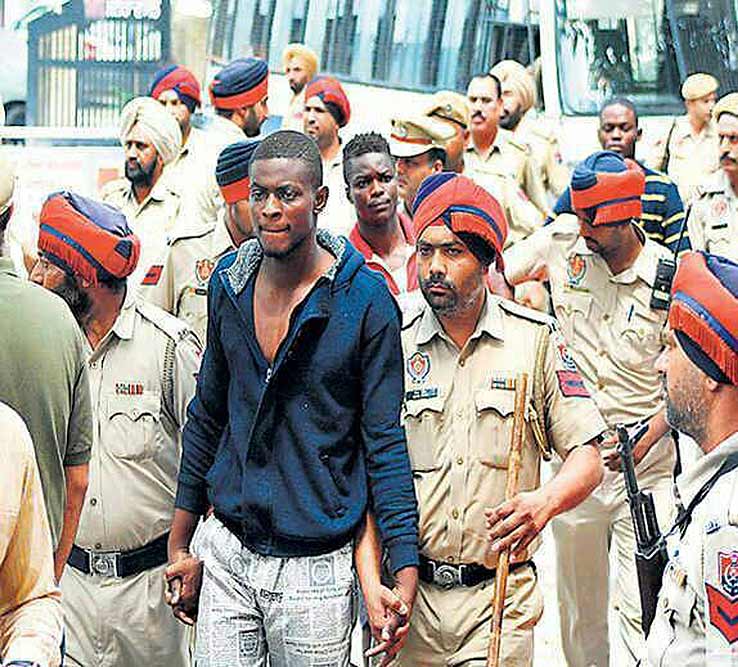 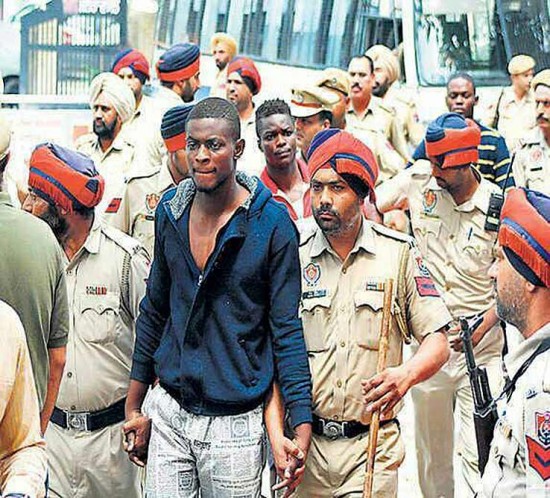 “Intolerance and racism is transforming Punjab into a hell for Black Africans.”

—kongotimes! after the arrests of 21 Congolese students

“We invite Africans wherever they are, either on the continent or in the diaspora, to boycott Indian products.”

“It is regrettable that those who inherited the legacy of Mahatma Gandhi should have turned the page so soon.”

That Indian society has a bias against the ‘dark-skinned’ is an everyday truth. What’s more worrying is its manifesting itself as racism, in attacks on and harassment of foreign nationals, specifically Africans studying or working in the country. Indeed, the increasing number of such incidents of late is now even threatening to undo India’s carefully crafted image of being a libe­ral, vibrant and pluralistic democracy.

Aware of the wide implications such incidents could have in Africa, South Block called a meeting of 20 African ambassadors in Delhi last week. This was after the Khirki Extension incident when the new state law minister Somnath Bharti, along with a number of his supporters, tried to storm a flat housing African nationals at midnight on suspicion that a “drug and prostitution racket” was being run from there.

The African envoys were naturally outraged (the Ugandan women had been publicly humiliated by the Aam Aadmi Party leader). Secretary (West) in the MEA, Dinkar Khullar, tried to smooth things over, admitting the inci­dent was “utterly condemnable” while giving assurances that an inquiry was on and that a special police cell was being formed in the capital to look into complaints by foreign nationals.

But this is hardly a corrective measure. A string of such incidents, not just the ones widely reported—like the confrontation that followed the death of a Nigerian in Goa in November and the one in Khirki Extension—points to serious consequences for Indo-African relations. One such incident back in June last year pushed ties between the Democratic Republic of Congo and India to a new low. This, after 21 Congolese students (all of them from Lovely Professional University, Jalan­dhar), were arrested by the local police. The police claim they were arrested for fighting with cops, but the incident was widely perceived as having “racist” connotations. According to the stude­nts, one of their own—Jeremy Kab­en­gele—had been abused by some Indian men in a car, which quickly degenerated into a fight between the two gro­ups. “But what explains the fact that not a single Indian was arrested?” asks Richie Lontulungu, president of the Congolese community in India.

The incident was widely reported back in the DRC and led to unpreceden­ted protests on the streets of Kinshasa. Indian shops in the capital were att­ac­ked and an Indian was injured in the protests. Things got so tense that the Congolese vice-minister for foreign aff­airs, Celestin Yakasende, sum­moned the Indian amb­assador to lodge a  strong protest. Their ambassador in India, mea­nwhile, was travelling to Jalandhar to get his countrymen rele­ased—which fin­ally happened after four days of det­ention (and not before the parents all­e­ged how the cops had ill-treated them.)

The killing of Simeon Uzoma Obodo in Goa, which spiralled out of control with another attack on an unnamed Nigerian national, reports of forceful evictions and the blatantly racist hoardings that came up quickly after (“Say no to Nigerians, Say no to drugs”) in the state took an even more radical turn. The Nigerian  consular official here, Jacob Nwadadia, even let out a dire warning: “Thousands of Indians living in Nigeria will be thrown out on the streets if the forcible eviction of Nig­erians in Goa does not stop.” 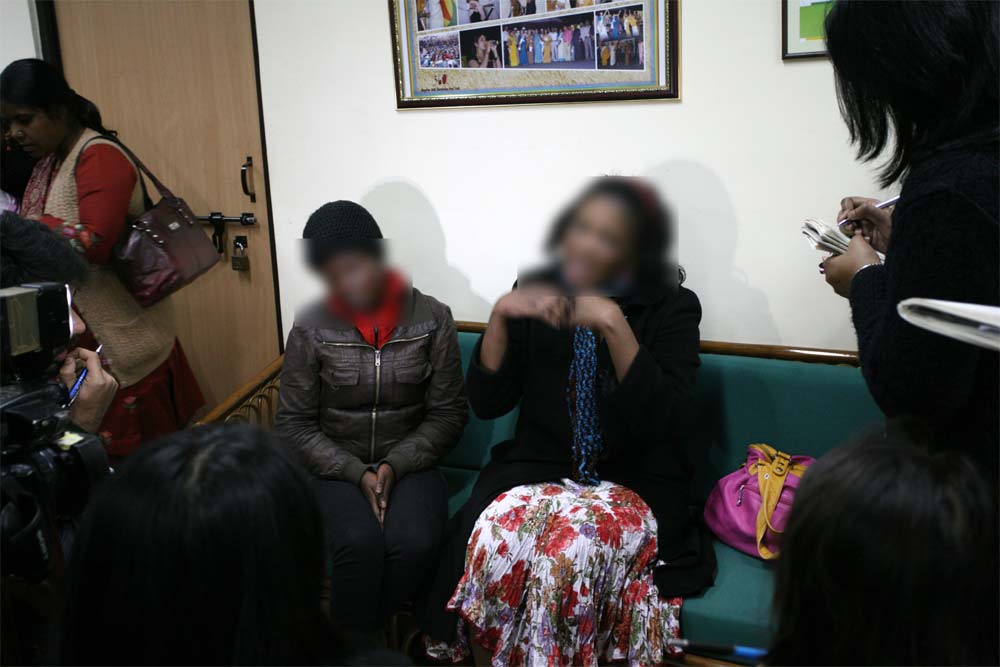 Ugandan women come to the NCW office to protest. (Photograph by Sanjay Rawat)

Lontulungu says parents at home are increasingly reluctant to send their children to India. “When they hear of these attacks, they begin to wonder what may happen to them,” he says. The increased media coverage of these incidents back in the continent now also threatens to bring down the inflow of African students into India. “Last year, we got around 1,000 students but I doubt we will cross that figure this year given all that has happened,” says Christophe Okito, president of the Association of African Students in India.

“...the first thing I always hear native Ugandans say is ‘I wish someone like Amin could come and chase them again.’”

While racist slurs are generally now seen as part of life in India, the recent Goa and Delhi incidents shocked Afri­c­ans more because of the involvement of government ministers. In Goa, tou­r­ism minister Dayanand Mandrekar described Nigerians as a “cancer” while it was Delhi’s law minister who led the midni­ght raid on African homes. Bangalore-based Timothy Wandoh from Chad is married to an Indian and has lived here for 10 years. He says, “The government too must reform its attitude. If not, Ind­ian interests in Africa will be seriously threatened. Many of those stu­dying here are the children of those who hold key positions.” He too was the victim of an attack following an argum­ent in the city and had to spend three months recuperating, because of which he lost his job as a French specialist with an IT firm. “Nobody’s been arrested despite my repeated complaints,” he says.

Meanwhile, Delhi’s policymakers are not too worried, feeling that India’s bon­afides in Africa are well-establis­hed. As retired diplomat Vivek Katju says, “Racial remarks and prejudices are prevalent in many countries against Africans...what is important is corrective measures being taken by the concerned government to prevent them.”

Many of our foreign policy mavens share this view. They talk about historical and cultural links and how leaders of many newly independent African nat­ions were part of Jawaharlal Nehru’s Non-Aligned Movement during the Cold War period. In recent years, they point to the different initiatives undertaken by India in African countries, setting up institutions, IT centres and other welfare projects, and also to the burgeoning bilateral trade which has jumped from $1 billion in 2001 to over $100 billion in less than a decade (the aim now is to raise trade volume to $150 billion by 2015). Moreover, India is now a very popular centre both for education and health, with a large number of Africans coming to get treated in Indian hospitals, which they say are much more efficient and less costlier than, say, those in South Africa.

Conversely, while doing business in Africa, Indians often show their ignor­ance about the continent and scant respect and knowledge about its diversity. “Indian businesses tend to see Africa as a single homogeneous entity and not as a continent with 54 indepen­dently recognised countries,” says Abhilash Puljal, a consultant who helps investors look at Africa among other areas to set up business.

However, the lack of knowledge about the continent is not only among the Indian business community, it is also reflected in the general attitude Indians have towards Africans, much of which is now raising some heat in the African media and popular debate. After the murder of Obodo Uzoma Simon in Goa, Farooq Kperogi, writing in the Nigerian Weekly Trust, said, “When a governm­ent minister describes an entire nationality as a ‘cancer’, it is reasonable that the vulgar herd will interpret him as giving them the license to cut off (read: slaughter) the ‘cancerous’ people.” He then goes to describe how Indians turn to the Net to accomplish this by using “most nakedly negrophobic terms like niggers, wild animals, sub-humans, Third World scum and such other dehumanising and unmentionable epithets”. The humiliation heaped on the four Ugandan women in Delhi pro­m­pted Hussein Lumumba Amin to write in The Independent, an Ugandan paper, “When events as the one we see today occur, the first thing I always hear native Ugandans say is ‘I wish someone like Amin could come and chase them again.’” Timothy adds, “If you ask the African on the street what he thinks of India, only one of ten will have something nice to say about India.”

South Block mandarins busy putting out the fire say the prevalent undercurrents of racism is not something they can handle. “It’s something that can be corrected only when we as a society rise above all this,” says an MEA official in Delhi. The big question is when will Indians shed their bias against the “dark skinned” ones, make them as comfortable as they do white Cau­ca­sians. For with each passing day and with every new ‘incident’, the Ind­ian stock in Africa is slipping down.

By Pranay Sharma and Debarshi Dasgupta