No Backdoor To Democracy

Nearly 10 hours after her touchdown at Karachi airport, amidst uproarious celebrations on the streets of the city, Benazir Bhutto stood emphatically, almost diabolically, vindicated—the suicide attack on her cavalcade demonstrating to the cynical Pakistani the awesome firepower and zeal of the militant. He can reach anyone, anywhere; kill and maim the innocent in his quest to grab power and redefine the soul of Pakistan. Ironic as it may seem, the death of 143 people in the attack on Benazir may not have been in vain. The world has long seen Islamic extremism as Pakistan's number one problem; now Pakistan sees it too. 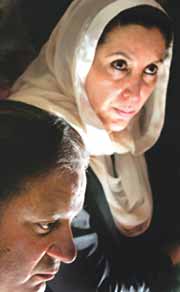 Benazir was vindicated in many other ways as well. She has demonstrated—beyond all refutation—the hypnotic lure of the Bhutto name, drawing an estimated two million people out to the streets of Karachi. All other political rallies of the past five years pale into insignificance in comparison. Nor has the exile blunted her political touch. Hours after surviving the carnage, she was in hospital to meet those injured. She was also remarkably pugnacious, refusing to cower in the overpowering ambience of fear. "These assailants want to derail the democratic process in the country because it suits their designs...aimed at promoting their so-called jehadi agenda," she said. "No one can prevent me from restoring full democracy in the country and I won't allow such forces to play with the future of the youth to fulfil their vested interests." The injured, still moaning in pain, shouted, "Jiye, jiye Bhutto", "Wazir-e-Azam Benazir". And mothers who had lost their sons in the attack vowed to send their surviving children to protect Benazir.