...Night Of The Pawns

As events clangour towards a denouement, all Iraqis feel is impotent rage 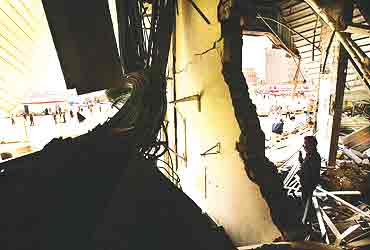 outlookindia.com
-0001-11-30T00:00:00+05:53
Nobody bothers giving you a warning in Baghdad anymore. When the deep rumble starts burrowing its way into your body, you have just a few seconds to see the building spilling out its guts into the air before the smoke and dust swallow it whole. The last time I heard an air raid siren it was the "all clear". Seconds later the roof was ripped off a presidential palace just across the Tigris river from where I was standing. Now the bombing is round the clock and the Iraqis have more pressing things to do than herald the arrival of the inevitable. This week the air war moved decisively into the heart of Baghdad. B-52 bombers and F-14 jet fighters circled the city in clear view, mocking the Soviet-era anti-aircraft guns which spat back hopelessly.

But now the targets have been widened beyond the usual suspects. Presidential palaces, government ministries and Baath party headquarters were still on the list but so too was the first bit of civilian infrastructure. The three main telephone exchanges were wrecked. The largest, some 15 storeys high, has a huge gaping wound where two cruise missiles disembowelled it at 3 am. Its twisted wire intestines bleed out of the walls in a tangled mess. Massive strips of concrete hang from lengths of steel girder. And the phone lines are dead.

Telephone exchanges have a military use but they are also the life-blood of a community trying to survive a war. Families, seeking safe havens, have divided themselves up. Husbands have sent away wives, parents have sent away children, all hoping that while they see this war out, their loved ones will be in a safer place. But now, after each bomb drops, there’s no way of knowing if it was your neighbourhood, your street, your family caught up in the blast. All over this city are twisted clumps of concrete where the institutions of the Iraqi government once stood and most of them are located in civilian areas.

If the Americans were pounding sand in Afghanistan, here they are just pounding concrete. Few people were in these buildings when the bombs struck. This war didn’t just creep up on the Iraqi military, they had over a year to prepare for it. They were not going to leave their instruments of power out like sitting ducks waiting for the Pentagon’s million-dollar calling cards to slam through the front door. That’s not to say these bombings are not having an effect. It’s just not the one the US wanted.

When I met Nadja Abdallah, she was perched on an old wooden chair in fluffy baby-blue pyjamas picking shards of glass from what remained of her window sill. And she was furious. "If Bush thinks his soldiers will be welcomed with flowers and music, then he is thinking wrong," she told me. "We will treat them like robbers who are breaking into our homes." The floor beneath her feet crunched as she worked her way around the first-storey apartment, her bedroom slippers skating on the glass fragments that made a glistening carpet all across her living room. Nadja had her windows blown out because the Americans finally made good on their promise to bomb to bits the ministry of information. The ministry was where, until just hours before the missiles struck, the remaining foreign journalists had to file their reports from.

Now it was just a facade. The insides had been blown out. The charred remains of Iraqi satellite dishes littered the roof, great chunks of concrete had been scooped from the blackened walls. It was trashed. But it was also a testimony to the accuracy of the bombs that had hammered into the building earlier that morning. Nadja’s house was less than 100 metres from the target and yet she was still around to vent her anger and frustration. And it’s that anger and frustration that so perplexes those prosecuting this war.

There is an expectation that people like Nadja should be almost grateful to the Americans that they are taking apart her city so carefully. Hundreds of cruise missiles and thousands of bombs have been dropped on Baghdad but, although tragic, the number of deaths has still been remarkably low for such a heavy bombardment. And so America seems to expect ordinary middle-class people like Nadja to think a few broken windows is a price worth paying if it means the end of the present government.

But they don’t. Because the US administration has made a fundamental misjudgement and that is, anti-Saddam does not mean pro-America. "We are coming," George Bush told the Iraqi people this week, "with a mighty force to end the reign of your oppressor. We are coming and we will not stop and we will not relent until your country is free."

"If they come, I will take up my gun and shoot them myself," an old retired civil servant told me in the Shorja spice market. He was dressed in a jacket and tie, his shirt collar had been repaired too many times and was a patchwork of white stitching. I asked him his name. "I’m an Iraqi," he said, "that’s all you need to know. I’m not a party man. I’m an independent man, but this war is against the Iraqi people and I will fight the invaders." He then made his way through the bustling crowd that choked the narrow lanes of the market stalls. A week ago this place was empty, now there’s a traffic jam at the entrance. People go about their business to the constant serenade of bombs dropping in the distance but it is taking its toll and making them angrier at their self-proclaimed liberators.

"The enemy we’re fighting is a bit different than the one we war-gamed against," Lt Gen William Wallace, commander of the US Army’s Fifth Corps said in response to the level of Iraqi resistance in small towns and cities which, before the war, America thought would be a walkover. The Iraqis didn’t war-game this one either, they didn’t need to, they learnt the hard way in the last Gulf war. They know that massed as a standing army they don’t have a chance so they’ve reorganised themselves to fight something resembling a guerrilla war. The defence of homes, streets and neighbourhoods is being organised by local Baath party militias. People who actually live in the area. The subtle message is clear and seductive: we are not asking you to fight for the President; we are asking you to fight for your family, for your home, for your community.

As I write, the whole of Baghdad is in darkness after the power grid collapsed moments after we heard a long barrage of artillery fire. The international airport is reported to be in the hands of American troops. The city is tense and confused and no one knows where this conflict will go next. The Iraqi military wants to make the Americans fight for every inch of Baghdad or at least convince them that that is what it will take if they are to occupy the capital. And they want them to know it will come at a price, paid either in civilian casualties or dead American troops. It would be a lose-lose situation for the US and one they pray can still be averted.

Paul Danahar is the BBC's South Asia Bureau Chief based in Delhi. He is presently in Iraq running the BBC's news coverage from Baghdad for BBC World Television, BBC World Service radio and all other BBC news outlets. He wrote this report exclusively for Outlook.