Night Of The Long S-Word

Saffron-baiters chafe at the prospect of a BJP win in 2004. But can the 'secular mob' ever regain credibility—and viability? 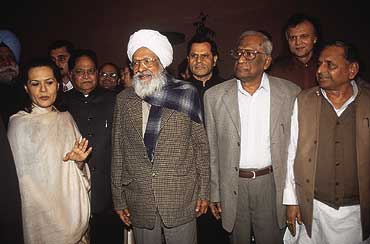 outlookindia.com
-0001-11-30T00:00:00+0553
"Communal parties oppose us and secular parties like the Congress are against us, while parties like the BSP have been incorrectly and unfortunately identified as being secular."
Samajwadi Party general secretary Amar Singh, in an interview to Outlook

Secularism as a political credo is good enough to unite political parties to defeat a bill in Parliament and raise the pitch on protecting minority rights, but is it potent enough to propel them to power, whether in the states or at the Centre? Have political parties been firing their cannons from the shoulders of the minority communities for far too long now, all in the name of secularism, while actually settling political scores and chasing narrow personal ambitions?

Analysts say the trends predict a somewhat bleak picture for secular parties in the days to come, specifically in the context of the next general elections, due in 2004, where the absence of any consensus on secularism could well propel a BJP-led front to power. While most parties swear by secular politics, its practical application on the ground is an altogether different story. Politicians opposed to the BJP say that another term of governance for the saffronites could raise serious questions on the functioning of Indian democracy itself. Congress leaders say privately that in the case of another hung Parliament and in the reversal of the number of seats and the absence of any agreement on secularism, chances of the second largest party mustering a coalition cannot be ruled out.

Is secularism turning out to be a fig leaf for larger political ambitions? S. Jaipal Reddy of the Congress makes out a case: "Secular politics, such as it is understood, is practiced only by the Congress and the Left. In the case of regional parties, like the TDP, Trinamul Congress, SP and BSP, for instance, ideology has been made subservient to personal ambitions. It has become a cloak rather than an issue."

Most analysts agree that the dynamics of governance and the 'amoral' nature of hard politics shut out ideological considerations—at least as far as government formation is concerned. Long years of Congress rule at the Centre and in the states have ensured that the rash of regional political parties that have sprung up may or may not support the BJP but are certainly anti-Congress in their approach. "For us, there is just one problem. We can't, under any circumstances, ally with the Congress," admits R. Ramachandriah, senior TDP leader and Rajya Sabha member. Political parties say that it is impossible to oppose one party in the states and support it at the Centre. The Left parties are doing just that by allying with the Congress in New Delhi.

According to CPI(M) MP Nilotpal Basu, secularism is a very relevant and important issue, particularly in the light of what has happened in Gujarat. He says the concept itself is facing a serious threat at the hands of communal forces. "Only being secular is not enough. There are other aspects of governance as well," Basu says, but argues that political processes are ever evolving and people are learning from mistakes and new experiences on how to practice secularism better as well as clear old misconceptions.

The UP assembly election reflects in a microcosm what could happen in the rest of the country. All through the campaign, the minority vote was the predominant factor with the SP, BSP and the Congress, each vying for a piece of the Muslim votebank.When the results came, it appeared that secularism had won the day. With Mulayam making it to the 147 mark, Mayawati 98 and the Congress 25, the combined secular seats tally easily crossed the 250 mark, normally considered a very comfortable absolute majority. But when it came to forming a 'secular' government, the scenario was markedly different.After much dithering and speculation, the Congress 'asked' the SP to first produce the numbers then think about forming a government, the BSP made it clear that it wanted no truck with any of the other secular parties—and coyly forgot to mention the BJP—while the SP said that while secularism had triumphed, the ball was in the Congress' court. The ball never bounced back from there. "The Congress is after all a small player in the state," reasons Reddy. So it finally boils down to numbers, not ideology.

The role of the Congress revealed what dithering could do when an alliance needs to be built up urgently. After meeting UP governor Vishnu Kant Shastri, UP Congress president Sriprakash Jaiswal said that since they were too preoccupied with Gujarat, it had not been able to decide on a strategy for UP. Unfortunately, it continues to be preoccupied with the never-ending Gujarat riots, so it would now appear that a so-called secular set-up, the BSP, is quite willing to tie up with the not-so-secular BJP in forming a government in Uttar Pradesh.

Mayawati has, in the meantime, been busy dispelling several myths. As anticipated earlier, her Muslim MLAs may have no problems in supporting a coalition with the BJP or better still even joining the state cabinet; she has scrupulously avoided any mention of Gujarat or Ayodhya that may annoy her post-poll partner and not surprisingly, the secular agenda has not been referred to since the UP results came out. When asked about it, the BSP leader said that "there was no question of going with the SP as its leaders have proved to be anti-people", a catch-all term that may not explain anything.

The CPI(M) also refutes charges that the Left has allotted the 'secular' nomenclature to parties that are merely misusing the label while pursuing a totally corrupt and casteist agenda. "Far from it. The Left has sought to examine all manifestations. The commitment of such politicians to the secular cause does not qualify them to misgovern the country," Basu says, and opines that there is nothing to show that a corrupt and bankrupt politician seeking to align with the secular cause is better than another corrupt politician who does not claim secular status.

Mamata Banerjee's Trinamul Congress, the TDP in Andhra Pradesh and the DMK in Tamil Nadu are positively uncomfortable with the VHP brand of politics but seem to have little option but to stick with the BJP, at least for now. Points out Ramachandriah: "The reality of Indian politics is that a government has to be formed. Since the mandate is more often than not fractured, it is not unnatural for two or more parties to come together. If the BSP is allying with the BJP in UP, it cannot be labelled as not being secular. If we use that yardstick then everyone in the NDA is communal." As for the TDP, Ramachandriah says that even though it fought the elections in tandem with the BJP, it has not joined the government.The events in Gujarat have upset party chief Chandrababu Naidu and have elicited several critical references to the Gujarat government from senior TDP leaders.

There is another factor as well. The number of general elections and changes of governments through the '90s have left the average politician very chary of seeking another mandate that produces approximately the same result. Says one MP: "You can ask for the NDA government to go. That is your prerogative. But the people who have to fight elections are not ready to go in for another poll battle. Ultimately, it is their will that is important and will count." And that could well determine how long the NDA government is going to stay.

This peculiarity of Indian politics makes for strange bedfellows: for the first time, two Dravida parties, the DMK and AIADMK, both sworn enemies in their home state, have joined to support the Vajpayee-led NDA government on issues like POTO.While the state DMK unit has snapped ties with the local BJP unit, DMK ministers continue to flourish in the BS dispensation and most surprisingly, even the AIADMK has said that it wants no confrontation with the Centre. So while both regional parties disagree, often violently, with each other, the only point of agreement is being on right side of A.B. Vajpayee.

The lack of any consensus on the real political value of secularism can only mean good tidings for the BJP. It does not seem too unhappy. Sunil Shastri, the BJP spokesperson, says that the issue is a political stunt, to begin with. "It is all votebank politics. By calling the BJP a Hindu party, these so-called secular parties are creating their own constituency. That is, unfortunately, the only issue they have." Rarely has one word—secularism—been used so frequently in Indian politics and followed so little in practice. Gujarat is a case in point. If parties opposed to the BJP can actually manage a change of guard in the state or even at the Centre, the S-word could well assume an altogether new significance. It could also, maybe, show the way to 2004.