The new generation can't even place Sonia's name in her hometown. But old friends remember her fondly and don't exactly credit the Mainos with unlimited wealth. 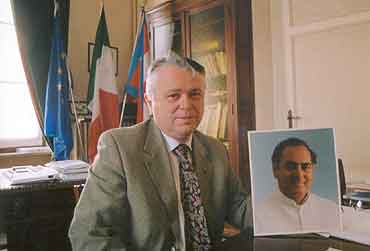 "Who is this Sonia Gandhi? We don't know her."

I 'm at the Malpensa airport in Milan, having a fruitless go at trying to find Sonia's ancestral house. Her name rings no bells, so I ask the information officer for directions to Orbassano, her hometown. Recognition dawns and he instructs me to take the train to Turin and from there drive to Orbassano, some seven miles away.

So there I am, in a virtually empty cabin of the train to Turin. I have two young women travelling with me. One of them, Rita, works as a manager in an IT company in Turin. I ask her about Sonia and she says she has never heard of her. "I was born in Turin in 1979 but the name Sonia Gandhi is new to me," she tells me. Her companion too pleads ignorance.

An hour and a half later, I am in Turin, once briefly the capital of Italy and home to the Fiat car factory. From here I have to take a cab to Orbassano, in the suburbs, and keep my 2 pm appointment with city councillor Awtar Singh Rana. A man from Jalandhar, Rana is proud of the fact that he was chosen to be councillor and was also in the running for mayorship. "It doesn't really matter that I lost the mayoral election. It is a big thing to contest elections in Italy," he says.

Rana, of course, knows Sonia. He takes me to the road that has been named after Rajiv Gandhi. At the eastern end of Orbassano, it reads, quite simply, 'Via Rajiv Gandhi'. Two kilometres further in Bellini, Rana shows me Sonia's house, but from a distance. He then drops me back to a hotel in Orbassano. 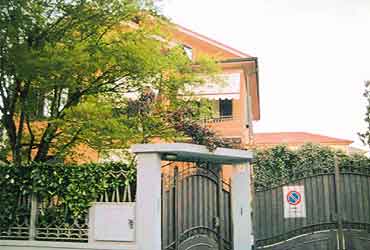 Some time later, I'm back at Sonia's house, towards Via Visenjo Bellini. I stop at a two-storeyed structure: 14, Bellini. There are three names beside the door bells on its huge iron gate—Maino N, Maino A and Maino Predebon. The last is Sonia's mother. I can't make out which part of the house her sister Alexandra lives in. I ring all three bells but get no reply. I tap two young neighbours—Sabatonno Biatale and Gyogo Pelegrinio. Biatale says he knows of Sonia, knows she lives in India but says she is not seen here. Pelegrinio is more forthcoming, "If Sonia takes over power in India, I'd be very happy. I've heard her mother's gone to India."

Across the street is a bookshop. The girl who runs it joins in our conversation. "I have been staying here for a year and that shop is mine. I have never seen Sonia but her sister Alexandra is one of my clients. Alexandra's shop is two kilometres further, at the Pyramid shopping complex."

It's called Etnica and sells cosmetics, essences, agarbattis, clothes, shawls and some pseudo 'antique' sculptures, the kind one can find in any ordinary shop in Jaipur or Delhi. They are certainly not the centuries-old antiques Sonia's detractors have accused her of smuggling.

I meet Rana again. Since much is made of Sonia's ancestral property in the Indian media and by her political rivals, I ask him how much the Maino property is worth. Not more than 20,000-22,000 Euros (about Rs 11 lakh), he tells me. "Sonia's house is in a very ordinary locality of Orbassano," he says. "My house is in a posh one and is of about 1,000 square feet. Sonia's house is much smaller. And three people have a share in it."

The following day I am to meet Orbassano mayor Carlo Marroni. He agrees to be photographed with a picture of Rajiv on the condition that I do not ask him about Sonia's family. Instead I ask him about Rajiv. Why have they named a street after him? Marroni says that Italians have great respect for the Nehru-Gandhi family and that's why the municipality dedicated a street to his name after his death. "Has his wife Sonia invested any money in a shop in Orbassano?" I venture to ask. The mayor is furious: "No, no...not at all. There's no shop owned by Sonia here."

Rana later corroborates Marroni's statement. "As far as I know, Sonia has no investments here. Neither direct nor indirect. Not at all. She has no personal or commercial interests here. Anything about her investments here is one hundred per cent incorrect," he maintains.

Next I visit Sonia's school in Giaveno, some 14 km from Orbassano. There I meet 55-year-old Sister Maura Ressent who studied with Sonia for a year and later with her sister Alexandra. Sister Ressent has some pleasant memories of Sonia. "I remember she stayed with me during the carnival. She took many pictures. She was intelligent, worked hard at her studies. She also had a very good voice. That's why we used to ask her to sing on every occasion," she recalls. But no she hasn't seen Sonia after school.

It's time to bid farewell to Orbassano. But before that I run into Volter Phillipia. He used to work for Fiat's publicity department. And knew Sonia well. "We used to go to Obeliana to dance. Now Orbassano has become a big town. The older people know about the Mainos, not the new generation. But when you meet Sonia, do tell her Volter Phillipia remembers the nicest girl of Orbassano."

(The author works for German Radio.)