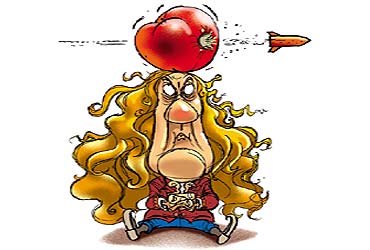 outlookindia.com
-0001-11-30T00:00:00+0553
"What are you up to this time?" a friend asked me enthusiastically. He was referring to the recent articles in newspapers announcing that an Indian had challenged Newton’s First Law of Motion. I explained my ideas to him as best I could, dwelling on the issue that if my mathematical derivation for unlimited energy—and the thought structure underlying it—had been published two centuries ago, the history of the world could have been quite different. If my theories are proved right, with experiment, we could have unlimited energy without needing to burn fossil fuel or radioactivity, and travel to the stars, within 10-50 years.

I had first presented them to the world via the Usenet in January 2000, and had published my book To the Stars! on our ‘adda’ family website in September 2000. To my great relief, no one ever accused me of lack of originality! Lively exchanges with those interested—all around the world—led to no conclusion about the correctness of my ideas, save that further work was required to prove them. I agreed heartily. I was, however, truly on my own. At that stage (around May 2001), my parents came for a visit and my father was keenly appreciative of my work, understanding its potential. He undertook to give my ideas publicity. Personally, I was hesitant to approach the media before doing the proper experiments but my father pointed out that as things were, I could never realise the resources to prove my ideas conclusively one way or the other. I realised his success when phone calls came from unknown people, congratulating me.

"Whatever led you to start thinking this way?," was the first question. The heavenly bodies, of course! How could we get there? Conventional ideas in physics force us upon this planet, forever. Biochemist-turned-science fiction writer Isaac Asimov deemed it so—it is impossible to construct a rocket ship to the stars (the fuel tank would have to be much larger than the earth!). Further, Einstein’s assumptions underlying his Special Theory of Relativity, which gave the world the famous equation e=mc2, forbade it—the mass of any body approaching the speed of light would become near-infinite, and thus incapable of further acceleration.

That seemed unfair to me. Why should the stars exist only to tantalise us? There had to be a way to go there. Why couldn’t we? Any number of science fiction movies and novels showed flying saucers. Our own Ramayana describes the vimaan, so the concept of pollution-less travel without rockets is certainly there in the public’s imagination. So, why was there never any serious effort made to actually make or even theorise about the possible technology of vimaans?

Newton’s first law of motion (a body stays at rest or travels at a constant speed in a straight line with respect to an initial reference unless affected by an external force) does not support the existence of vimaans, as vimaans can accelerate without external force. So its functioning cannot but disprove the First Law—which in turn revises many others dear to physicists. Newton’s third law of motion (to every action, there is an equal and opposite reaction) seems to make any internal activity ultimately futile. For, any force generated completely within a body (internal force, let us say) has an equal and opposite counterpart.

Thus, overall, there will be cancellation of forces and the body simply cannot move, unless an external force is applied. So, no object can move with internal force—hence, vimaans or flying saucers can reside solely within the imagination. Let us assume, for argument’s sake, that Newton’s First Law is wrong—that is, a body can move using its internal force, generated by expenditure of its internal energy, and clever engineering processes. Then the consequences become very interesting. If the body increases its velocity ‘v’ as a result of an internally induced acceleration ‘a’ over a time period ‘t’, then no matter what its initial velocity (with respect to any initial reference), its final speed will be that initial velocity plus ‘v’.

Consider a body on a frictionless surface. You are in a vehicle beside it, and you want to move the body at the same speed as your vehicle. You give a push, and the body accelerates till it reaches say 10 km/hr and then keeps on sliding. You speed your vehicle to 10 km/hr, and then give the body a push using the same force as earlier. The body then reaches 20 km/hr and you speed up your vehicle correspondingly for the next push.

So, with the same expenditure of energy every time, you can push the body to as high a speed as you can reach with your vehicle. The forces exerted here were external to the body, but they could have been internal and generated by internal energy, by our assumption of Newton’s first law being wrong.

Let the percentage of internal energy ‘E’ converted to kinetic energy be ‘k’ (k is less than 1), so kE = 0.5mvv, where ‘m’ is the mass of the body and ‘v’ the increase in speed over time ‘t’. In time, T, where T = Nt, the internal energy required to speed the mass to the speed Nv will be EN, while the kinetic energy of the body, with reference to the initial reference (where v was 0) will be 0.5m(Nv)(Nv). Now EN = 0.5mvvN/k, so the maximum extra free energy, with reference to the initial reference, that can be obtained will be 0.5mvvN (N - 1/k). Note that N can be as high as design considerations will permit. Let some engineering device convert as much of the body’s kinetic energy as possible to, say, electrical energy, and then use a fraction for its effective internal energy. The balance electrical energy is up for consumption.

We thus have a generator that produces power indefinitely without needing any external source. This apparently breaks the law of conservation of energy, but actually reduces it to a special case, applicable where "velocity addition" effects as described earlier do not occur. When such a generator is used to drive a vehicle using internal force, we have a spaceship to the stars. (And an explanation for the internal energy naturally emitted by the stars, and artificially from N-bombs?) A constant acceleration of g, or nearly 10 m/sec/sec, would let it reach light speed in a year, twice light speed in two years.

After that, it would turn around to face the earth, and then keep on "accelerating" towards the earth, effectively decelerating towards the star. So it looks like a return trip could take 10 years, using purely Newtonian mechanics, and ignoring any possible consequences of Einstein’s Special Theory of Relativity. In any case, such a vehicle could go on land, on sea, in water, in air, as well as space. Its engine could give energy anywhere, and thus, truly open the universe to mankind.

That’s all very well, a physicist would say, but what about Newton’s first law of motion? Let’s see how we can shake it up, before we find ways to break it. Consider a closed box in outer space. An electrically powered robot starts accelerating from one end till it reaches around the middle of the box, then it decelerates to a stop at the other end of it. As it accelerates, it pushes the box in a direction opposite to its travel, and so the box also accelerates. When the robot decelerates, the box also decelerates, and comes to a stop. To an external observer, the box has certainly moved without any external force, and so Newton’s First Law has at least been shaken. If the robot had continued to accelerate and banged against the other side, that impact would have brought the box to a sudden stop. If it had gone straight through, the box would keep on moving, behaving like a rocket expelling mass.

Suppose through some engineering means, we make the robot just about to hit the rear side of the box transfer most of its kinetic energy to another robot stationed at the rear side. The second robot thus moves with the same velocity along the box and hits the front side, thereby transferring its kinetic energy to the whole box, making it attain a higher velocity. This may look impossible, but let us not forget that unlike force, energy is a scalar quantity with no sense of direction, and can change its form.

In my book, To the Stars!, I have envisioned the above approaches in detail, using currents in electromagnets to accelerate a mass, and a hydraulic system to transfer the energy of the mass, from one to the other going in the opposite direction. Probably a simpler method, using two balanced masses connected rigidly, and involving "energy reversal" with angular momentum, may be found more suitable.

I believe there is a pressing need for experimentation in this vital area. We should not take things for granted, blindly following the accepted laws of physics and conclude from such ancient theory alone that all internal activity in a closed space must necessarily dissipate into heat, as opposed to overall motion. The fate of mankind, and the health of this world, depends upon the favourable outcome of such experiments.

(The author, an IIT alumnus, worked with Bharat Electronics, Ghaziabad, for 11 years, moved to Telstra Research Labs, Melbourne, in 1989. He can be contacted on e-mail . This is an abridged version, full text of which appears as a web-exclusive. All rights reserved.)