With mates like these; Let's not go there; Upper berth ride; Seeing visions; They don't like this eerie glow 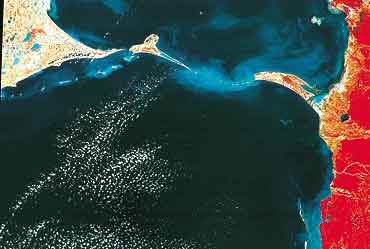 outlookindia.com
-0001-11-30T00:00:00+0553
chennai, tamil nadu
A Ship In The Shallows
A week after the Prime Minister’s Office in an official note raised post-tsunami objections to the DMK’s pet Sethusamudram Ship Canal Project (SSCP), the Tuticorin Port Trust (TPT), which is the nodal body for the execution of the Rs 2,233-crore project, has notified a tender seeking "appointment of arranger for raising funds" worth Rs 1,500 crore. The SSCP envisages excavating the shallow sea between the Palk bay and Gulf of Mannar (44.9 nautical miles) and creating a canal linking India’s east and west coast. While environmentalists have raised objections about the canal’s viability, the fisherfolk here have threatened self-immolation at the mandatory public hearings (see India’s Suez: Is It Ecocide?, October 18, ’04). What seems to have spurred the PMO’s objections is articles in journals like Current Science and Economic and Political Weekly about the sscp’s technical unfeasibility in a post-tsunami context.

The PMO noted on March 7: "Had the Sethusamudram shipping canal been operational at the time of the tsunami, the currents in the Palk bay and the associated turbulence would have damaged the canal considerably and caused a wide dispersal of the dredged material placed at seas." The PMO felt the environment impact assessment and the technical feasibility report had ignored the effects of tsunamis and cyclones. Using strong words, it said: "The project could lead to major economic, technical and human problems in future that could border on a disaster."

This should have been a dampener for SSCP enthusiasts, led by shipping minister T.R. Baalu. But undeterred, a tender notice was announced by the Sethusamudram Corporation Ltd (a TPT subsidiary). On its website, tpt has even proposed "a pre-bid meeting" on March 28 at its offices for "prospective tenderers".