Let the games begin; It ain't wet here; All you can eat and more; Blind left turn; Wrong treatment 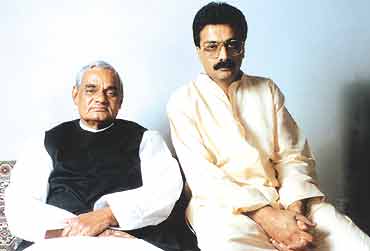 It’s no wonder that the BJP and some of its NDA allies are seeing red over the Manmohan Singh government handing over the Tehelka probe to the CBI. Sources in the investigating agency say Ranjan Bhattacharya, foster son-in-law of A.B. Vajpayee, and former principal secretary in the PMO, Brajesh Mishra, could also come in the ambit of the probe now since their names too figure in the tapes.

The tapes apparently have Ex-BJP president Bangaru Laxman explaining Mishra’s role in clinching defence deals. "So far we have been taking the help of Brajesh Mishra to organise this because he is on a number of committees.... We normally turn to him because he has access to defence, foreign and other related ministries...he deals with the bureaucracy, and also conveys the views of the bureaucracy to the prime minister. He is the liaison between the bureaucracy and the PM," Laxman told the Tehelka journalists at the infamous meeting where he was caught on tape taking bribes to get contracts for a non-existent arms company called West End.

As for Ranjan Bhattacharya, Laxman said in the tapes that he wasn’t into defence deals but was involved in other areas. "As far as defence things are concerned, I don’t think he has much. (He is involved) somewhat in power projects. This and that...."

The middleman videotaped was an RSS trustee called R.K. Gupta. Gupta talks about Ranjan fixing deals for himself and not for the party. He also recounts how he circumvented Ranjan and approached the then PM directly. "Ranjan Bhattacharya is doing for himself. He is the prime minister’s son-in-law. I have cut him into pieces. I have gone through the party. PM can’t say no. Party’s getting Rs 100 crores. He won’t say, ‘No, my son-in-law (should get) getting Rs 100 crores. Leave it’," Gupta told Tehelka. And as for the already implicated George Fernandes and Jaya Jaitly, well there are enough references in the tapes to keep the CBI busy for awhile.