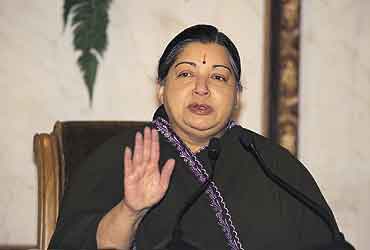 outlookindia.com
-0001-11-30T00:00:00+0553
DELHI
Long-Distance Law
Anew, star-crossed phase seems to have begun in Tamil Nadu chief minister J. Jayalalitha’s life. After having to climb down on The Hindu after a Supreme Court stay, she got more cause for dismay—and it’s the apex court playing spoiler once again. Last week, the court ordered the transfer of trial in the two ‘disproportionate assets’ cases against her to neighbouring Karnataka, asking her to be personally present when called upon to do so.

"There’s a strong indication the process of justice is being subverted.... Justice should not only be done but seen to be done. If criminal trial is not free and fair and not free from bias, judicial fairness and the criminal justice system would be at stake...," Justice S.N. Variava and Justice H.K. Sema ruled.

They also directed the Karnataka government to constitute a special court in Bangalore, under the Prevention of Corruption Act, within a month in consultation with the state’s chief justice. dmk MP and petitioner K. Anbazhagan had alleged that Tamil Nadu’s public prosecutor was hand-in-glove with the Jayalalitha government. The apex court took note of his plea and recalled that of the 76 witnesses recalled by the public prosecutor, 64 had turned hostile. It also frowned upon the exemption granted to the CM on grounds of ill-health and asked all the accused—including Jayalalitha—to be present when their statement was recorded.

The decision, legal experts say, may have a significant bearing on the controversial Best Bakery case. The National Human Rights Commission (NHRC) has sought the transfer of the case for trial outside Gujarat.