At last, the deferred day of judgement; The jangle of bangles; Subcontinental memory; No patient hearing; The lure of sympathy; Navigator's safety net 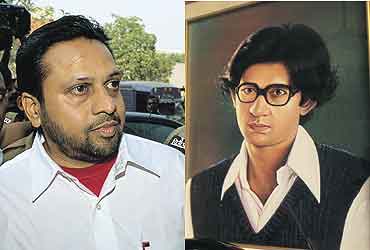 outlookindia.com
-0001-11-30T00:00:00+0553
NEW DELHI
At Last, The Deferred Day Of Judgement
Is justice delayed, justice denied? The trial of the accused in two grisly killings, one of Left theatre activist Safdar Hashmi and the other of Naina Sahni, which shocked the nation’s conscience years ago, concluded last week. The city court in Ghaziabad sentenced 10 persons, including former Congress leader Mukesh Sharma, to life for the brutal lynching of Safdar Hashmi on January 1, 1989. In the second case, ex-Youth Congress chief Sushil Sharma was found by a sessions court in Delhi to be guilty of murdering his wife Naina Sahni on July 2, 1995, and then attempting to burn the chopped-up corpse in a tandoor.

Nearly 14 years ago, Hashmi was performing a play, Halla Bol, during the municipal polls in Sahibabad on Delhi’s outskirts. During the play, Mukesh Sharma and nine others attacked Hashmi and injured him seriously. He died the next day in a Delhi hospital. His murder sent shock waves through the country. Two days later, his widow, Moloyshree Hashmi, performed the same play at the same spot in Sahibabad, sending emotions sky high. A visibly moved Moloyshree credited her trade union comrades for the systematic follow-up in a case that dragged on for long.

Naina Sahni’s case hit the headlines eight years ago. Suspecting her of having an affair with fellow Congressman Matloob Karim, Sushil Sharma shot her after he discovered her talking to Karim on the phone. He wrapped her body into a bundle and drove to Bagiya, a restaurant in a central Delhi hotel. With the help of restaurant manager Keshav Kumar, he attempted to burn her in the tandoor. However, the thick smoke alerted constable A.K. Kunju, who reached the spot. Sharma escaped then but was arrested a week later in Bangalore. While the court acquitted Keshav Kumar of murder, he was found guilty of conspiracy and destruction of evidence.