The editor of Himal penned this piece from prison: 'I want to be back on the streets, to be part of this history-making people's tsunami.' Updates 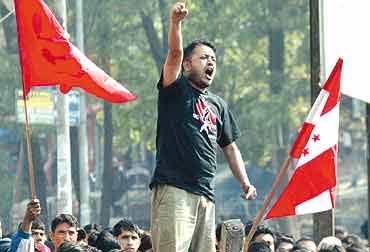 The citizens of Nepal first tasted the elixir of freedom after the 1990 people's movement brought down the palace-run Panchayat system. And then came this self-destructive king with a medieval worldview. Though flaunting the name Gyanendra or the fount of knowledge, here was someone bent on proving his contempt for 26 million citizens.

The people kept their counsel for as long as they could, even as the political parties sought with difficulty to raise a movement, caught as they were between the gun held by the king's obsequious Royal Nepal Army and that of the Maoist rebels. But pressure was building from below as the people awakened to the loss of democracy, which they soon realised also blocked the path to peace.