Nemesis On His Platter 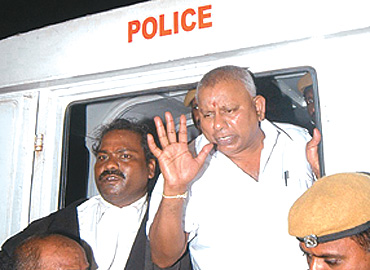 His story has all the key ingredients of Tamil pulp fiction—money and murder, superstition, sleaze and sex—with a heightening of the lurid that is characteristic of the genre. It’s also a rags-to-riches story—of enterprise, tenacity, a homely idea parlayed into humungous success. And as in classic Greek retribution, P. Rajagopal’s story ends in downfall and the punishment of overpowering, wrongful lust. On March 23, the 59-year-old founder-proprietor of Saravana Bhavan, the popular chain of south Indian vegetarian restaurants, surrendered after being sentenced to life for the murder of the husband of a girl he wished to marry.

There are those who believe that ‘Annachi’ (elder brother), as he is popularly known, could not get away—the way many figures in similar situations have done—only because he made powerful enemies, including political ones. Others speak in awe of his success and his devotion, pointing out how a Murugan temple in Vadapalani, once a humble structure, is today a grand edifice, thanks to his munificence. That munificence was made possible by the 1.2 lakh daily footfalls in his 48 eateries—19 in Chennai, two in Kanchipuram, one in Vellore, three in New Delhi and 23 in the US, UK, Canada, Malaysia, Singapore, Dubai and Oman. No one is willing to talk numbers, but conservative estimates put a day’s takings at his restaurants at Rs 1 crore. 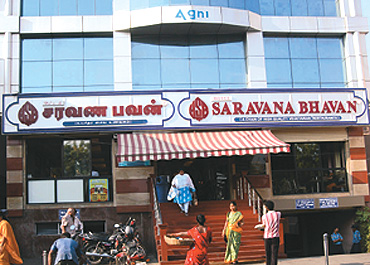 In a stew: One of the chain’s Chennai restaurants

The 350 dishes at Saravana Bhavan have won thousands of fans who come in regularly throughout the day. The restaurants also offer services like takeaways, home delivery and catering. The usp is that the idlis are just as fluffy, dosas just as crisp, chutneys just as delicious, whether you eat them at the K.K. Nagar outlet in Chennai or the one in California. When Rajagopal started out in K.K. Nagar, he never stinted on quality but insisted on pricing everything low. Today, there’s still no compromise on quality, but the prices are steep. Customers don’t seem to mind, though.

The story goes that Rajagopal’s first venture was a successful grocery in K.K. Nagar, but he sank into debt after buying the two-storey building in which it was located. One day, some sales representatives told him to attend to them quickly as they had to look for a place to have lunch, there being none around. Not long after that, Rajagopal, on a trip back from Thiruthani, is said to have had a eureka moment while eating prasadam: he and a friend, Ganapathi Iyer, took over Kamatchi Bhavan, a small restaurant that was not doing well, and renamed it Saravana Bhavan. It opened on December 14, 1981.

According to Rajagopal’s autobiography, Vetri Meedhu Aasai Veithen (I Set my Heart on Victory), available at all Saravana Bhavans, the two friends ventured ahead because an astrologer—who seemed to dictate all the moves in Rajagopal’s life—said there was only prosperity ahead. The partners worked from 6 am to 11 pm, assisted by Rajagopal’s first wife, Valli (the mother of his sons, Shiva Kumar and Saravanan). For the first six months they lost Rs 10,000 a day, but worked towards building a loyal clientele and formulating a pocket-friendly menu. By the first anniversary, there were 23 items priced at just Rs 5 on the card—and police had to often turn up to clear the crowd of customers.

By 2000, ten Saravana Bhavans had sprung up in Chennai and one in Kanchipuram. The turn of the millennium also saw Rajagopal making his first foreign foray, in Dubai. He went on to take his brand to other corners of the world, while dotting Chennai with ‘Meals Ready’ boards. His 48th foray was in Singapore, which already had two Saravana Bhavans. The chain won many awards, including the Best Employer-Employee Relationship Award in 1996, conferred by the Rotary Club of Madras.

The business flourished and he bought out (some say, defrauded) Iyer, but gradually sleaze entered his life. His two weaknesses: greed and coveting another man’s wife. He married again, taking as second wife Kruthika, who was already married to one of his employees. But he didn’t stop there, apparently because his astrologer advised him to marry Jeevajyothi, the daughter of an employee, saying it would bring him unimaginable riches. As always, he believed the astrologer. But Jeevajyothi was in love with Prince Santhakumar, her brother’s tutor who was also Rajagopal’s employee. Rajagopal started propositioning Jeevajyothi, but she stubbornly spurned him and married Santhakumar in 1999. Rajagopal’s ardour cooled off, but returned when her mother approached him to stand guarantee for a bank loan so that the newly-wed couple could start a travel agency in Velachery.

When his attempts to get Jeevajyothi failed, Rajagopal directed eight of his goons to kill Santhakumar in October 2001. After Santhakumar’s decomposed body was found in Kodaikanal, Rajagopal and some others surrendered to police in November. Jeevajyothi’s police complaints and other evidence nailed the restaurateur as the mastermind, and in April 2004 he was sentenced by the Poonamallee sessions court to 10 years rigorous imprisonment. He reportedly posed "coolly" for cameras while being marched off to jail.

However, he obtained bail and in July 2003 went to meet Jeevajyothi in Vedaranyam, Nagapattinam district. He is said to have offered her Rs 6 lakh and gold jewellery to marry him. When she rejected him, he threatened to have her abducted. That led to his rearrest, but he again obtained bail and appealed to the high court. The ploy did not work: the HC pulled up the trial court, saying: "Conviction under Section 304(I) of IPC is not appropriate, and once the accused are found guilty under Section 302, the sentence could be either death sentence or life imprisonment." So life is what he got, not death, because the judges felt Rajagopal’s crime did not rank among the rarest of rare cases. Rajagopal was sent to Puzhal prison this week, but his lawyer plans to appeal to the Supreme Court.

Rajagopal’s own troubles have come even as his son, P.R. Shiva Kumar, managing director and in charge of Saravana Bhavans abroad, is battling charges of human trafficking. Last November, the US consulate lodged a police complaint that he had submitted fake or forged documents in the case of four employees whom he sent to work in his restaurants in the US while claiming they were going to attend a convention there. The consulate scrapped its contract with the restaurant. Additional DGP Archana Ramasundaram said, "Shiva Kumar has admitted to his crime and also other instances of his taking people to the US and getting them work permits."

The restaurant website says, "We at Hotel Saravana Bhavan follow the perfect formula for success." Evidently, justice has proved more powerful in making Rajagopal pay for his crimes.