In this exceedingly well-informed, passionately conceived and elegantly written 'Nehru Charit', Tharoor has produced an important tract for our times. 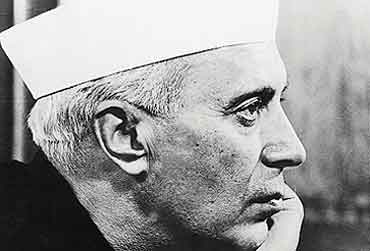 Nehru: The Invention Of India
By Shashi Tharoor
Viking Rs 295; Pages: 272
"Jawaharlal Nehru’s impact on India is too great not to be re-examined periodically," writes Shashi Tharoor at the beginning of this lyrically nationalist biography. He picks through the details of the nationalist movement, pegging it to the career of a rather unremarkable young man who rose in later life to shape the very contours of the Indian nation-state. We may continue to deify Gandhi, and seek to bury Nehru’s Idea of India, but much like the daubing of fingernails with long-lasting electoral ink to prevent bogus voting, it is Nehru’s modernist legacy that has marked the life of our democracy. In this exceedingly well-informed, passionately conceived and elegantly written ‘Nehru Charit’, Tharoor, a late midnight child himself, has produced an important tract for our times, both historical-national and the virtual global.

The meatier portion of the book is a fast-paced yet sure-footed journey through nationalist north India, as it coalesced with Jawaharlal’s own life. While framing the colonial mai-baaps, Tharoor is engagingly irreverent: Lord Irwin, the Dandi-march Viceroy, comes across as "singularly unimaginative", and Churchill as a "bombastic imperialist whose racism got the better of his judgement on Indian subjects". Canonical nationalist events by contrast are notched differently: the Jallianwala massacre "made Indians out of millions who had not thought consciously of their political identity before that grim Sunday".

Yet his book seems to demand a bit too much from mainstream nationalism, both in the field and in office. What may well seem to be its defining features appear to Tharoor, in retrospect, as empty gestures, mistakes, wilfully wrong choices. He would much rather that instead of resigning elected office in a huff in 1939, and abetting the pointless violence of 1942, the Congress had continued to wield provincial power from the late 1930s, leaving very little political space either to the Raj or its blue-eyed boy (Jinnah) to stymie the march of a united subcontinental freedom. He would further that this freedom, once gained at great cost, should have been used pragmatically and economically. Nehru could well have grabbed the Security Council seat, held ridiculously by Taiwan, instead of loftily massaging mainland China’s ego in world fora; he should not have been disdainful of the 1953 US proposal to encourage India to develop the newly-emergent political entity, Southern Asia, as its own hegemonic zone, even as some of these other nations were hatching into political daylight.

Our first prime minister, while retaining his ‘modern’ waistcoat and ‘secular’ achkan at home, should have stopped conducting foreign policy through a personalised brand of Khadi Diplomacy. Similarly Nehru, the ardent nationalist, had dwelt far too long in India’s colonial economic past; he mistakenly thought he could engineer through the economic policies of the independent nation-state the industrialisation the exploiting mother country had denied India.

So while his economic and foreign policies are passe, Nehru’s enduring legacy is India’s continuing democracy. That leaves out the orphaned term ‘secularism’. While hugely concerned with its life chances, Tharoor restricts his discussion to a rapid checklist of what may be called statist grounds for the ‘Hindu grievance’ against the Muslim residents of the Indian nation. True, the usual suspects—personal law, minority educational institutions, ‘vote banks’—are flaunted and flogged with far greater effect in the vicinity of electoral booths. But that leaves by the side the politics of, shall we say, ‘India’s Medieval Memory’, and its relationship with the institutions of state, and of democracy.